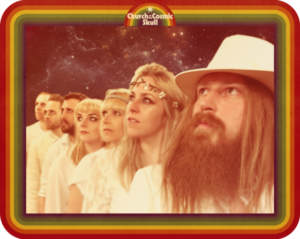 Ahead of the launch of their debut album Is Satan Real? this week LTW editor Sarah Lay chatted with Church of the Cosmic Skull founder Bill Fisher about the band and becoming a new religious movement.

With influences from prog, rock and pop new Nottingham-based supergroup Church of the Cosmic Skull are about to unleash their debut album Is Satan Real? on the world.

And what an album it is – certainly one of the finest rock records of 2016.

Sitting somewhere between religious cult and ’70’s prog this band are pairing their massive sound with a doctrine of cosmic unity. It could be gimmicky, an eye-roll-inducing pseudo-philosophy in matching white outfits but there’s an air of quiet authenticity about the band, undoubtedly strengthened by their phenomenal sound.

A rising choir of harmonies, some unusual instrumentation and big riffs and growling lead vocals the tracks take the best of the theatrical side of rock and do away with self-indulgent and overt technical displays. It brings rock music back to a core of pounding melodies and ominous builds; a listen that is huge the first time but reveals an underlying complexity of concept with further plays.

With members who have also played in bands such as Dystopian Future Movies, Mammothwing, Hellset Orchestra and You Slut! and a set of principles that include an intention to “Celebrate and uphold the freedom of art, science and thought” Louder Than War caught up with Church founder Bill Fisher to be inducted into their philosophy and music.

LTW: You describe yourselves as a “twofold entity: a new religious movement…and a 7-piece supergroup.” Which came first – the religious or the musical aspects? How long has the band been in the making?

Love and music have been with us for all of time, they are inseparable. Most of the songs were written many years ago. It made sense to bring a new group of people together around the songs.

Where did that vision for the band, and the aesthetics of it, come from?

All visions come from within the Cosmic Skull.

Given this twofold aspect what place do you think music plays in challenging or reflecting society and political positions?

Music has the power to take us far away from the rantings of the puppet-masters. Ignore their propaganda! They control nothing. Celebrate and uphold the freedom of art, science and thought. Maintain focus on the unity of all living beings.

The Seven Objects you use as pillars of your approach – are these your personal principles to adhere by or something you came up with as a band or…? What is you hope for sharing these Objects and encouraging people to sign up to them?

The Seven Objects are the ‘things we are directed towards’. Perhaps the music will encourage people to be similarly directed.

As a supergroup how did you all come together? Were you playing gigs together or knew each other through the local scene…?

The music scene here is a vibrant place full of willing participants. Michael Wetherburn [Ulysses Storm/Hellset Orchestra] is the go-to hammond player, with a tremendous vocal range. Michael and I share a love of musical theatre and the songs of Queen.

Loz Stone [Iron Swan, Rescued By Wolves] has incredible feel and taste which are the most important qualities in a drummer. Amy Nicholson [Hellset Orchestra/Polymath] is a phenomenal cellist and singer who was introduced to me by Michael, with whom she played in Hellset.

Sam Lloyd [You Slut!/Pilgrim Fathers] is undoubtedly one of the best bassmen I have ever heard and plays a huge role in spreading the Cosmic Word. Joanne Joyce has amazing vocal power and technique, and has some wonderful solo material coming soon. Caroline Cawley, who I met during the formation of our other band, Dystopian Future Movies, has a beautiful natural singing voice which never fails to touch my heart. I am also in love with her.

Prog and ’70’s rock (which you list among your influences) can sometimes be looked down on as being a bit too serious and/or indulgent and theatrical – do you think it’s got an undeserved reputation?

The allusion to Prog/Psych/’70s Rock/Pop came after the songs were developed. My influences are more prog-pop than prog-rock. Kate Bush, David Bowie, Peter Gabriel, The Beatles. In the same light, the rock music I always return to is song-orientated; Thin Lizzy, Queen, Sabbath etc. The song must come first. I am not interested in meaningless displays of technical ability.

How easy has it been to take the recorded sound and arrange it for live? On video you have a very strong visual aesthetic, can we expect something similar in the live show?

The recordings feature only single parts from each instrument or singer, without additional layering, so it translated. And yes, live you can expect some strong visuals.

Album is out on Bilocation Records / Kozmik Artifactz – how did you find this label / how did they find you?

I was in Mammothwing, who were also on Bilocation, they released our album last year. They are an amazing label based in Germany, pressing the highest quality vinyl for great bands from all over the world. They’ve worked with Mondo Drag, Ruby the Hatchet, The Heavy Eyes. Recent releases include some wonderful stuff, especially Bright Curse, Friendship, Gin Lady, I can’t list them all here, see the label site at kozmik-artifactz.com.

What’s the plan for Church of the Cosmic Skull beyond this album?

More music and video. CDs are available now, vinyls are coming later. We are booking festivals and a tour for next year, hopefully reaching out to Europe. The word must be spread, for the word is good. Join us: cosmicskull.org

Church of the Cosmic Skull launch their debut album Is Satan Real? with a show at the Rescue Rooms in Nottingham on 16 September 2016. Get tickets here.

Is Satan Real? is out on Bilocation Records / Kozmik Artifactz digitally and on CD on 16 September.

Interview by Sarah Lay. Sarah is editor of Louder Than War and you can find her on Twitter and read more pieces from her in her author archive. She provides LTW’s recommended track of the week on Radio Andra’s The Rumble – tune in Tuesdays from 8pm or listen to the podcast.