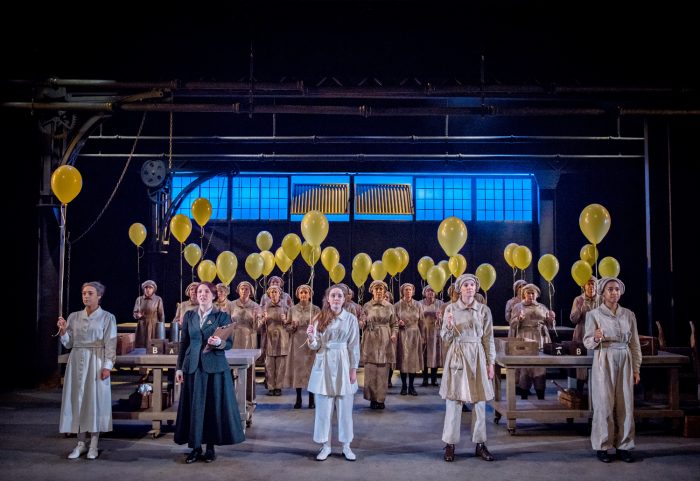 In 24 years as a core member of unlikely anarchist pop stars Chumbawamba it’s fair to say Alice Nutter never took a step back, and she is bringing that commitment to her new life as a playwright.

Her first play My Generation at West Yorkshire Playhouse was loosely based on her life as a political activist living in Leeds communes, but her new work Barnbow Canaries is set around a catastrophic explosion at a huge factory – producing 10,000 shells a week in 1916 – that killed 32 women, and injured many more a century ago.

“It’s about munitions workers, and women in the First World War basically staffing the factories,” says Alice. “It is based on the explosion that happened in Leeds, but the play I wanted to write was how women behaved as soldiers really, and at the end of the war they got a terrible deal out of it.”

Not surprisingly given Nutter’s politics, Barnbow Canaries not only focuses on the daily dangers in making shells, but how the patriarchal attitudes of the time left those women who risked their lives high and dry when hostilities ceased.

Influential feminist Carol Hanisch once observed the ‘personal is political’, so Nutter has weaved the story of the women who risked their lives every time they stepped into the factory with her own experiences.

“Basically I used the names of women who worked, or died, in the factory but it is not a docudrama, I wasn’t interested in that,” notes Nutter. “I invented their characters and the relationships between them, but, although I’ve done it with the utmost love, it is not sentimental.

“I’m not just writing about the munitions factory but it is the relationship between two sisters. When one of them dies the other one realises that you think you hate their guts, but that you love them, and they stay with you in a way. I could write about that because my sister died a few years ago and because I couldn’t have just written a political play.”

If politics is about the personal, it is also about cause and effect. A whole generation of women during the Great War got a taste of freedom – and loved how that changed their lives – before it was snatched away when the men marched back from the frontlines.

“I’m telling that story, but also how they were shat on because it was a really dangerous occupation and they risked their lives. They were soldiers in a sense, but at the end of the war when they went to the labour exchange to draw dole people told them they should have saved when they were working.

All well and good, but what lessons can we learn from an explosion, which was a human tragedy, but took place a century ago in what seem to be very different times.

“If you look at something like Everyday Sexism, that movement now, this play is everyday sexism. The fact their deaths were never highlighted, and that it took a local history group digging around in the 1990s to unearth their story, is everyday sexism.

“It’s not a conspiracy, it’s just women aren’t really considered that important, so there are parallels to what is going on now. Unless women highlight what they are pissed off about, what they are involved in or the way the world is then the status quo just carries on as it is.

“So in the same way when the war finished there was so much pressure to get back into the home, or go back to domestic service, with no pension or recognition.” 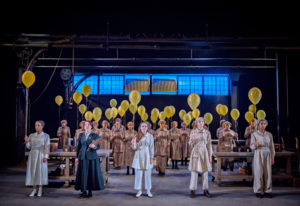 In a troubled world where solidarity is all too often considered an insult, Nutter has taken inspiration from the factory workers who paid in their danger money so the injured could get convalescent treatment after the blast because the bosses wouldn’t pay up in a world before the NHS.

That spirit has inspired the onstage community choir who include in their ranks relatives of women who worked at Barnbow, and others who live in the Cross Gates area of Leeds where the factory stood.

“There are 44 women in the chorus who are brilliant,” smiles Nutter. “It’s the first time a lot of them have ever been onstage. There is troupe of actors, and the community chorus backing them up, but they are not just pulled out to sing now and then so we have got them doing all sorts.

“It is bit of trial by fire so it’s a juggernaut that has set off, and I hope to god we stay on the rails.”