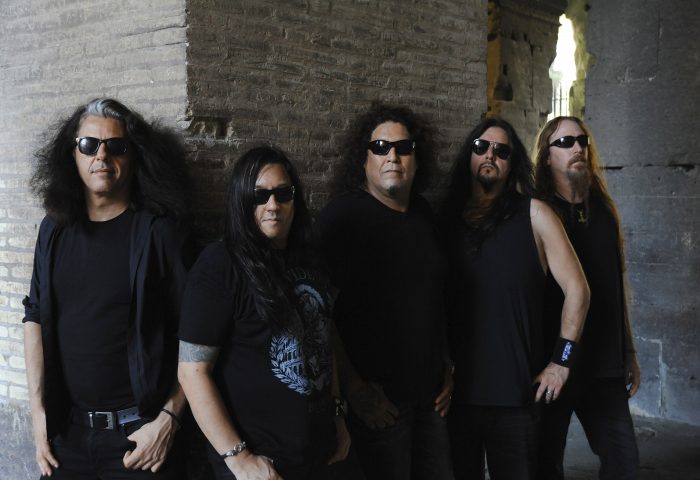 At the end of October, Testament will release their eleventh studio album, Brotherhood of the Snake, followed by a UK tour at the start of November alongside Amon Amarth. We spoke to vocalist, Chuck Billy, about the making of the album and touring the UK again.

You’re coming back to UK in November how do you find the English fans in comparison to others?

We haven’t got a chance to tour a lot here, we normally come and play one show and then have to go again.  I’m looking forward to playing a lot more towns and cities than we have in the past ten years!

I’ve heard previous interviews when you’ve said that this album is faster and thrasher than last record – that right?

Definitely! Everything that we set out to accomplished we accomplished. I wanted to use more of my voice and be a bit more melodic, I think I use just the right of depth to compliment the songs.

It was agonising trying to get record done. There was a lot of anger and fights between me and Eric, we were working over a year and a half and couldn’t complete the songs. It made me a little nervous and scared that we couldn’t get it together.

All those emotions going into it to begin with poured out onto it, it made us reach deep and pushed us out of our comfort zone. It brought more creativity. I didn’t think we’d do a better record than last one but I think we’ve managed to complete that goal.

What are you most proud of about this record?

That we accomplished what we set out to do as far as the sound of the record. For me, I wouldn’t have it any other way.

I’m happy and proud that Eric worked out music for I wanted vocally on the record.

It was the first record that we didn’t go into the studio with the demo or go in and rehearse the songs. We were writing and we knew we had to have it finished June 15th as we were going to Europe.

We put pressure on ourselves.  Going into the studio the band had never heard the songs – just me and Eric.  It made them frustration.  Gene was angry, he was having a tough time as hadn’t heard anything. It comes across on record because at end of the day he’s pounded the shit out of the drums!

When you do something twenty plus years a certain way, you get used to your way of doing it.  So taking a risk like that was very scary.

We did make the right decision but we were still uncertain as we were writing. I was writing lyrics on the spot in the studio. I went with first instinct and stuck with it and that paid off. Normally when you rehearse songs, you develop and change them for better or worse. This record was driven by our gut.

I told Eric at the end straight up that I did not have fun doing this record and I don’t wanna write it like that again.

I love mythology and I know there’s a strong concept behind the story.

Usually we’ve been writing more lyrics about real things we’ve dealt with in our life.  With this record Eric wanted to write more stories about something different I was open to it.

I’d been watching program called Ancient Aliens, showing religions around the world with the same sightings and fling objects in their scriptures.  It fascinated me and I thought maybe aliens are real. I was born and raised catholic, was told catholic tales.  Aliens were not something I would think were real.  Maybe were just a spec in a big scheme of existence.

Anyway, I found something that had gotten the ball rolling. Then I found story of the Brotherhood of the Snake. It was a secret society that went on a crusade out to devalue all religions. I brought it to Eric’s attention and  he said it would make a great title.

What legacy do you want Testament to leave in the music world?

Probably that from day one we’ve always made the same kind of music, thrash music.  We’ve never wanted to abandon what we’ve done or created what we’ve been a part of.  When people look back on us they’re probably go yeah they were a thrash band.

Testament’s new album ‘Brotherhood Of The Snake’ is out on 28th October via Nuclear Blast, available for pre-order on Amazon.