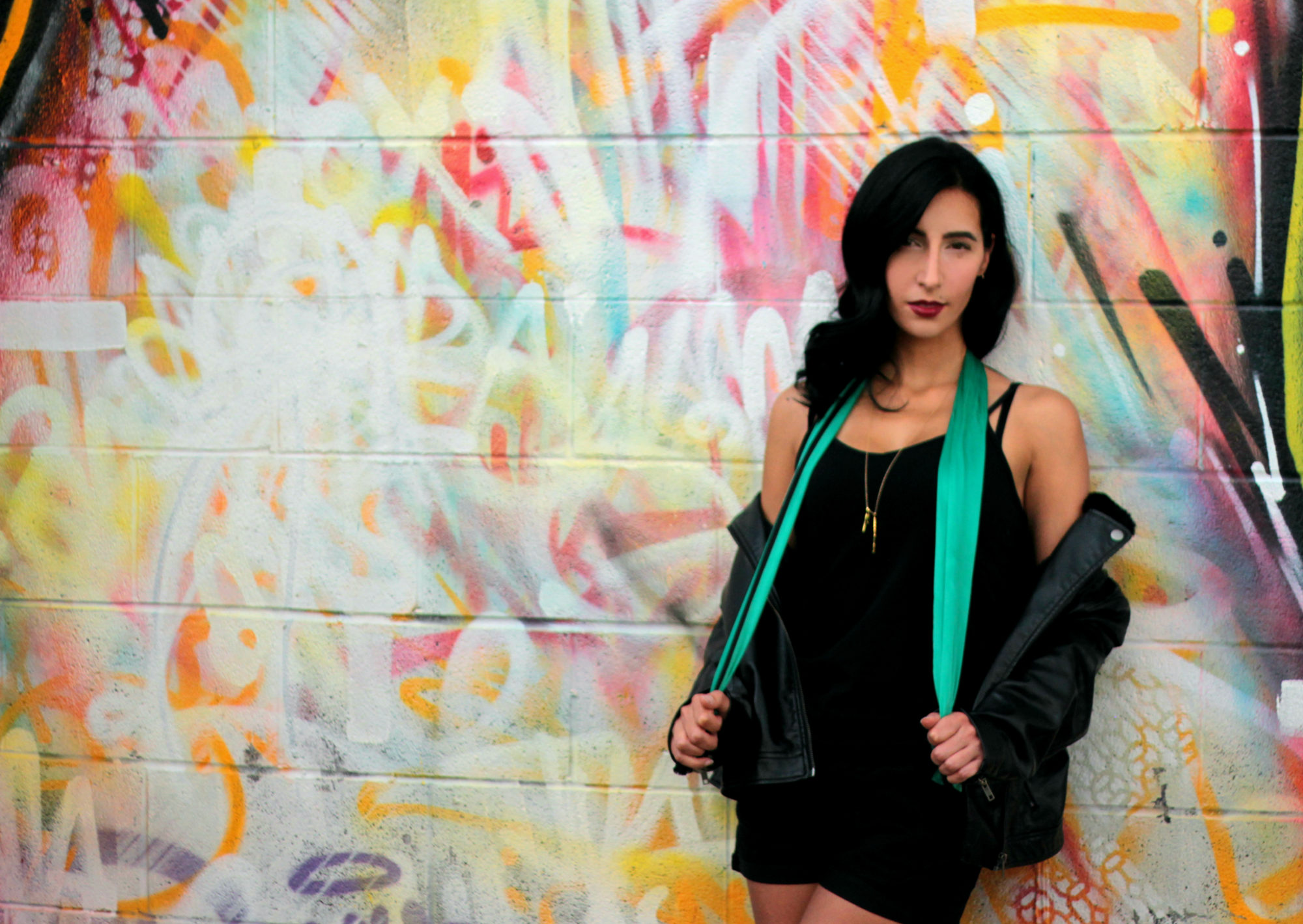 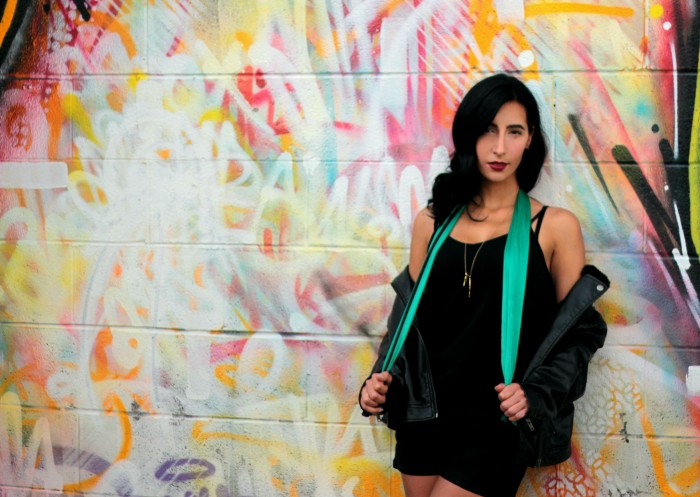 Her lead song is a haunting flavoured, emotional performance, gathered from her own life experiences with a raw, gritty feel to it. Chrystyna says  “Breath is life, and life is music”. Although she has been featured as a demo singer since age 18, and has had lead roles in community plays such as “West Side Story”, and “The Wizard of Oz”, as well as a lead singer in an L.A. Band called “Greencat”, she feels that releasing her own music is where her true passion lies.

Louder Than War: I am in love with the song “Loaded Gun”, what is the story behind the song?

Thank you so much.  It is a song that I hold near and dear to me.  It was a huge turning point in my life where I finally sat myself down and told myself its time to take control of my life and do for me.

I always knew I wanted this one to be my first single. It is about an ex boyfriend of mine.  He was a drummer in a well-known band; to avoid any problems he will remain nameless, as we are friends now.  We were in love and we were talking about marriage.  I had packed up my life in LA, left my job, my friends, everything I knew to move to his home state to be with him, in a remote area mind you.  Picture bears in the backyard type of forest.

I was aware when we got together that he had a little bit of a “habit” with certain substances, and he had told me that he quit.  I later found out that it was more than a “habit” and he was still using behind my back.  I wouldn’t allow myself to accept that, I have a strong no drugs policy.  I don’t want to see it and I don’t want anything to do with it.

When I found out he was a “functioning user” the relationship had already turned into an extremely emotionally and mentally abusive one.  He would constantly put me down and berate me.  He was saying he wasn’t even sure if he still loved me.  He scared me.  I was scared to be with him. I was trapped, in a state where I had no friends and nowhere to go.  It got to the point where I was miserable all the time, crying myself to sleep, and severely depressed.  I needed a way out.  I could not live my life like this, in a forest forever.  NO THANK YOU!

One day, I saw an opportunity to leave.  It was a quick now or never type of situation.  He was going into town and as I mentioned, we lived in a remote forest area, 40 min away from civilization. He asked me to join him and I opted out to “stay home and clean the house”.  As soon as he walked out the door, I was like “OK!  I have 20 minutes to pack up my car with everything that I can and get out of here as fast as I can without passing him on the road, or him seeing me drive by.”  So I packed up as much as my little Honda Civic could carry and I drove back towards California. I did leave my TV behind though. It was too heavy for me to carry. I was sad about that for a while.  It’s actually a running joke now. A “parting gift”.

I didn’t have a plan, I called my best friend Izzie on the way and told her this is what I’m doing, I have nowhere to go, can I stay with you? And she said “yes, absolutely. When you here just call me, you have a place to stay”.  I never left him a note, never left him any clue that I was leaving.  That was it.  I left, and didn’t look back.  No regrets. I was not going to live that life.

When do expect to have a full-length album out?

I will be writing and recording the rest of the full album in the beginning of January 2016.  I hope to have it ready by fall of next year.

Who are your musical influences?

I grew up listening to my mom’s old records.  She had records and a record player. I loved to sneak it to the basement and listen to them.  I developed a love for music of the 20s and 40s at an early age.

I idolized Etta James, Ella Fitzgerald, Billie Holiday, Dinah Washington, Sarah Vaughn, Nina Simone, Louis Armstrong, and Lou Rawls.  I also grew a love for the trombone.  I idolized Glenn Miller and his big band stuff.  I took up trombone in elementary school and still play it to this day.  I would love to incorporate a few solos in my live shows at some point.

Do you have a song that you are most proud of writing or one that means something very special to you?

Loaded Gun is very special to me as previously noted.  Down The Road however also holds a very special place in my heart.  It was extremely difficult to write and I almost gave up the entire project and music all together during that process.  I am proud of myself for getting through it and sticking it out and telling my story.  I wanted people to know me and this particular song is a part of me.

At a young age, about 9 my home was broken.  We all played the façade of happy home VERY WELL.  But inside, it wasn’t so pretty.  My parents were going through a horrible, non-amicable divorce.  There was arguing, fighting, anger, hurt, deceit, children forced to choose sides.  Not the ideal place for children of 9 and 5 to be.  I like to use metaphors in my writing and this particular song is doused in them.  It is about my picking up alcohol as a substance to control an uncontrollable and intolerable situation and finally letting it go and gaining control of my addiction and saying goodbye.  I masked it well.  I was functioning.  NOBODY until I wrote the song and had to explain its origins knew I had a problem, aside from my closest friends who partook now and then.  I am now 7 years sober and this song is my childhood.

What made you decide to go it alone, instead of choosing a label?

I have been in and out of independent labels since I was 16, in both Toronto and LA.  When you are with a label they own you.  They tell you what music to sing, they tell you how to dress, they tell you what to say.  I went from R&B, to pop, to dance, I even rapped once after much persuasion.  I never got to do what I wanted to do.  I wanted to sing about things I could relate to, in a style that wasn’t very popular at the time.  When I’m singing a song someone else wrote for me, I can’t get into the true emotion and the overall performance isn’t genuine.  Also, in my experience, I found its difficult being a woman in the industry and people expected “more” from me and I was not willing to disrespect myself to get ahead so I always got dropped or shelved.  I’m not saying this is how it works all the time, but in my personal experience its how it went.

I finally told myself, if I want to do this, if I want to make music, I need it done my way.  I’ll take the hit, do it out of my own pocket.  I can write my life, I can have a say in production, I can wear what I want and say what I want.  I wanted to create music from my personal experiences with my own true emotions.  I wanted it to be raw and real and for people to get to know me and grow with me and go through things with me.  Going it on my own was the only way I saw this happening.

I believe that you’ve had some acting experience, how do you compare that to creating song?

I do!  I have been a featured extra in TV and movies and a few leading roles in smaller local stuff on stage musicals.  I see acting and writing as two separate things.  Call me weird or odd, but I see acting as acting and writing music as real and personal.  Creating a song for myself involves no lies or characters.  I don’t have to get into a false sense of mind to portray the person I am supposed to be because I am being just me.

Your songs sound very personal to you, are you trying to get a message out there?

They are all real life experiences.  They each tell a story, beginning to end in a few short minutes.  My message is to be strong and brave.  Trust in yourself.  Through the bad come great things.  If you’re in a horrible situation, take that leap and trust that everything will be ok.  It will be.  Only you have the power to do you and make things happen.

Can you please explain, “breath is life, and life is music”.

Yes.  A person can’t live without breathing.  For me, I’m not alive unless there is music in my life.  Music, writing, performing, even just listening to music makes me happy.  It is who I am.  Music is my breath.  Therefor it is my life.  Without it, I feel like I am not living.

If we could look into your heart what would we see?

You would see an easy-going, fun-loving, adventurous, spontaneous, live each day as it’s your last type of woman.  I like to think of myself as independent and fierce, but I also have a sensitive side. I am told by many that I have an overly kind heart.  I put others before myself.   I would give the shirt off my back to one in need and stick up for those afraid to use their voices.  I value life, family and friendships.

If you could perform anywhere in the world where would it be and why?

If you could give your younger self advice, what would it be?

Love yourself and stay true to your values. Just do you, the rest will follow.

Do you plan a tour to support the EP?

I do!  I would love to tour the U.S after the release hopefully over spring/summer.  The EP is releasing February 29, 2016!