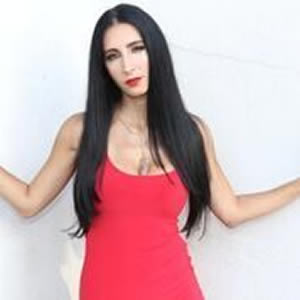 Canadian born rock/blues/pop artist Chrystyna Marie has just released her full length album entitled “LIFE”, on July 24th.  Now living in LA, Chrystyna is a powerful singer, classically trained, and has been singing since age 12. She has been featured as a demo singer on indie labels, and has had various roles on televisions and in music videos. Her true dream was always to release her own music.

The album is a sexy mix of passionate lyrics and authentic topics. Sonically it flirts with a hint of country flavor however the release is predominately full of blues, rock, and even some pop. Taking a risk on this album, Chrystyna felt compelled to theme her music on what inspired her at the time which was her contracting job on the road,  working for an oil company. Each day she found herself down in the ditches with the big burly men who worked by her side.

Louder Than War spoke with Chrystyna about her new release and what influenced it as well as her future musical hopes and dreams.

Louder Than War: Tell me about Chrstyna and how you came to who you are today…

I grew up in Canada, and then I moved to California for a record deal. It was an independent label, and I was about 27 years old at the time. Obviously men will be men, and sometimes they want you to put out in order to get released. That’s not what I was about, so I never gave them what they wanted and I got dropped. Four  labels after that the same thing happened so I kind of quit music for a while. Then I met my boyfriend that I’m with now and he convinced me that I was wasting my dream. The thing is though you have to pay for yourself. So the two of us were offered a construction job with an oil and gas company. It was good money so I took it. I figured I would do this, make my music, come back to LA, and release it, and see what happens. So for the past three years I’ve doing coding engineering in the construction field of the pipeline.

Wow, that fascinating and brave.

It was only myself and two other women working in the ditches with these big burly men, who thought, what is a woman doing out here. I earned their respect by proving myself. It was good inspiration for song writing. Like “The Witching Hour” was inspired through the oil field life. Most men have a double life out there.

Were you on the road?

We left La and went to North Dakota for a year and a half, then we went to Pennsylvania for the next job, and then to Colorado. Honestly I would not trade it, it was a great experience. It was a different world, and you don’t know about the different lifestyle there unless you experience it.

I would say that you’ve definitely paid your dues.

I hope so. I made the music and now I’m hoping that it was all worth it.

Before that, you were doing music for awhile?

Yeah, from about 12 until I was 27, I was doing it in Toronto. I did a couple of things in Portugal, a few guest appearances of cover songs. I performed a lot in Toronto.

So you just released the album a few days ago. What kind of reaction are you getting thus far?

I’ve gotten one review of the full album, and it was actually really good. I’m very happy about that. I was a little nervous with this album because it’s very different than the EP. The EP was about pop and blues….more pop oriented. This time around being out in the field, it’s more like a hillbilly feeling.

I felt a hint I’d country in there.

It was like what I was going through. I was a little bit wary of the reaction, but it’s doing very well, and I’m very happy and pleased. It was very special because it was so different, it was a risk that I was willing to take.

Do you plan to tour?

I would like to, yeah. Again the thing is money, hopefully in a couple of months I’ll start planning a tour.

If you could perform anywhere where would it be?

Honestly I never pictured myself on a big stage, kind of like little tiny venues. I would like to play at the Grand Ole Opry. It’s not really my theme but I would love to do it. I think that would be it. Also I would love to play in Glastonbury. That’s  big! That’s the ultimate I think.

I’m hoping to have my music in film and TV, and be associated with a few charities like The Wildlife Foundation and The AIDS foundation. I lost quite a few friends to AIDS and I would love to be an ambassador for that. Obviously I’d love to win the Grammy. I think that would be my goal, to use any status or pull that I get for charity purposes, film and TV.

Is there anything special that you’d like to promote for yourself?

Just the album. Nobody knows who I am, so just to get out there would be the most special thing to promote.