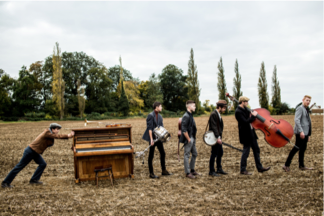 Very quickly gaining popularity, CC Smugglers offer something vivaciously unique in music. Their sound is packed full of high powered, explosive, energy, and their live performances are spontaneous. Having just released a new single, “Rhythm”, and video, and having recently come off of playing with Bruce Springsteen, Louder Than War was able to catch frontman Richie Prynne.

Louder Than War: I’ve heard your music, and you guys are awesome, however, I feel like you should be playing somewhere in the foot hills of Kentucky. What genre do you consider yourselves?

It’s a mixture of all sorts of music. It’s all original. It’s kind of like an amalgamation of blues, swing, jazz, and then old time bluegrass. It kind of gets whacked under general folk terminology most of the time.

What is the definition of music to you personally?

I guess it’s noises that makes some kind of emotional response.

Well put. How did your group come about?

I was writing songs, playing on my own for a few years. I recorded my own things when I was very young. I would go to the studio and there was a double bassist who I wanted, and then over the years we added a drummer, and it kind of snowballed over the years.

You’re really busy, doing all types of festivals and such. So introduce your group.

It’s a 6 piece. On the front end there’s a banjo and lead guitarist, Ryan. On my right end we have a fiddle, Sam, then Dan, a double bassist, we’ve got a piano player, Joplin, then on the back we’ve got a drummer, who comes from a jazz background, Joel.

I like the interaction with the audience. That’s probably what I go for. In our shows we don’t just stand there, there’s a lot of live banter in between the songs.

Do you have a favorite band?

One of my favorite groups is a band called: “The Quebe Sisters”, they’re based in Texas. There are 3 sisters, and they sing in 3 part harmony. The 3 of them play violin in 3 part harmony as well. If I could get up there and play with them, I’d do that without a shadow of a doubt.

I feel like all of your songs are extremely high energy.

They are, most of them.

In 10 years I’d like to have a series of albums under my belt. I’d like all of us in the band to be comfortable. I’d like to have a little house with a recording studio in the back. I’d like to be writing for other artists. I’d like to do a couple of tours a year. We played with Bruce Springsteen a couple of weeks ago. I was watching him on stage, and I thought, if I could get to his age and be doing that, then I will be happy. He knows where he is comfortable on stage. In comparison I saw Lana Del Ray, and she’s probably younger than I am, and she kind of looked bored, she was going through the motions, but Springsteen, he just had a smile on his face, he’s a real showman. That’s what I want. I want to do more writing on the side, and support a family, then I’ll be happy.

Where are you from in England?

Bedford, which is a farming, rural county, outside of London. We’re close to London, but were countryside.

Who writes most of your songs?

I do. It’s kind of like a collaboration with the rest of the band.

How do you get your songwriting ideas?

It’s just something that happens. That’s a hard question to answer really because, everyday there’s something else, it’s not just one thing. Sometimes I just need to get that emotion out, sometimes it’s like a two line phrase. For example something I wrote 3 weeks ago, “If you knew what love was…then you wouldn’t treat me this way”. So the first part answered the second part…I don’t know, it just comes.

Do you have a song that you like performing best?

Not really, no. Our finale tune, “Working Man”, is pretty fun to play. I like the ones that are old school. I like any song that drives an audience crazy, that drives me crazy.

Who did you listen to in the radio while you were growing up?

I didn’t really listen to the radio. I used to mow the grass for my dad, and get a couple of quids every week. I would go down to the nearest town or village. In the town on Sunday there would be a market, and a little old man selling country and rock ‘n’ roll tape cassettes. I would go and spend my two quids and buy a tape. Inadvertently i stumbled on old American music. I would buy Johnny Cash, Elvis, and old compilations like Chuck Berry, and without realizing I think that kind of set me up for right now. Also my grandad was a trumpet player in a big band, so when I was a real young lad, I heard Glenn Miller and those kind of big bands. In the background I guess it permeated.

I can hear a little of that in your music. I feel as though you’re going to become very popular in the UK, very quickly, because you are so different.

Is there anything that you would like to promote for yourself?

Well we’ve got a single out, and video that’s just out now. What we’d really like to do is to get people to like our Facebook page.it means for anyone in the audience that we can have a communication with them. Once you can engage with people who like music, you can make sure you can get to them.

Any last words to your fans or followers.

Come get to a show. If you like it, then spread the word. It’s word of mouth, tell your friends. Share it because it’s the only way it’s going to happen.