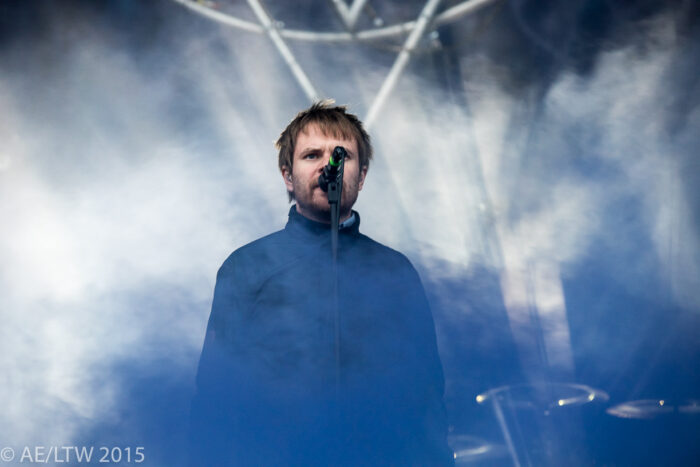 Over the past decade Enter Shikari have gone quietly about their business, building a huge fanbase, releasing four hugely successful albums and slowly becoming arguably the most important British band of the modern era. 2015 saw them return to Download Festival for the third time, to headline the Zippo Encore stage with their own full stage production. Alan Ewart was excited to grab an interview with the band before their appearance.

Friday evening at Download saw me return to my van soaked to the skin and exhausted after a day trekking round the various stages taking photographs, conducting interviews and where possible, watching bands.  On getting back to the Van my heart missed a beat and it had nothing to do with the weather.  I logged onto my iPad to catch up with the outside world and was hit by the news that Dave Grohl had broken his leg falling from a stage in Gothenburg and Rou Reynolds had been hospitalised as a result of a reaction to medication.  My heart sank.

On Saturday morning I sought out Enter Shikari’s PR representatives and breathed a sigh of relief when I found out that the show would be going ahead although the warm-up gig in Bristol the previous evening had been cancelled.

Sunday saw me catching up with Enter Shikari drummer Rob Rolfe prior to the bands performance.  Rob told me that “Rou isn’t feeling well at all.  He had a really bad reaction to a new antihistamine that he takes for his hay fever.  He was really ill on Friday and we had to cancel Friday’s gig.  We were all gutted because its only the third show we have ever cancelled in over 10-years as a band.”

Rob continued “Rou hasn’t slept for two days so he isn’t up to doing any press and he may not be quite himself tonight.  He is trying to get some rest in the tour bus and hopefully he will be fit enough to put on a great show for everyone tonight.”

I asked Rob how it felt to be back at Download for the third time, especially as they guys have previously credited the festival with helping to break Enter Shikari as a band.  Rob said, “We will always be really grateful to Download.  They were the first festival to give us a chance.  We had been playing pubs and clubs up and down the country for three years and suddenly here we were at a major festival”

Rob continued, “we couldn’t quite believe it, suddenly we were on the other side of the fence, we had all gone to festivals as teenagers and here we were playing at one of the biggest.  We will always be grateful to Andy Copping and Download for putting us on. It really was an incredible feeling.”

Rob admitted to being really excited as he told me “we just got here a couple of hours ago but the crew got here last night to set the stage up.  They have been sending us pictures of the stage with all our gear, this huge wall of lights.  It’s so exciting to be able to bring our own production, especially as the likes of Lamb of God are on before us.  It’s the biggest buzz of being headlining being able to bring our own production.”

Rob explained that Enter Shikari always set out to “give the audience as much as we can for their ticket price.”  He explained that “the visual impact of our shows is important but we leave the lighting etc to the technical guys, we don’t really have a plan as to how we all act on stage, we just run about according to what feels right, hopefully if we are having a great time the audience are too.”

As we talked it was clear just how much their fans mean to Enter Shikari.  Rob told me that if Rou wasn’t quite himself then “the fans will carry us through.  We have amazing fans and they will sing the lyrics for us if needs be.  This is such a big deal for us.  We have been looking forward to tonight for months and the feedback from the fans has told us how excited they are too.”

“So many people have been sending Rou messages wishing him well.”

In recent days Enter Shikari announced that they are taking the Mindsweep tour into Arena’s next year and Rob told me how excited they all are to be moving up another level.  “We are so excited about the tour.  It marks a new chapter and is without doubt the pinnacle of our career so far.  We can’t wait it’s so exciting.”

I asked Rob to explain why many different sounds come into Enter Shikari’s music.  He explained “we all have very eclectic tastes in music.  Between us we like metal, dance, rock, jazz and even classical.  When it comes to writing songs normally Rou comes with an idea and we all work together to mould it into an Enter Shikari song.  We try not to limit ourselves.  That helps to keep it fresh for us and the audience.  We don’t want to be held back by artificial and restrictive barriers.”

“We hope that people think that Enter Shikari do whatever they want and that they understand that.  They seem happy to go with whatever we come up with.  We like that and our fans seem to as well. When we write we all have an input and we work out what works for the song, its not four separate layers, its whatever works for the song.”

Rob also revealed that they were delighted to have been asked to play two sets at this years Glastonbury.  They are hoping that on the John Peel stage they will be able to play the better known songs and he hinted that there may be a few surprises for the hardcore fans who get to Left Field early enough to find a place.

I am delighted to report that Rou Reynolds seemed to have grabbed some rest on Sunday afternoon because Enter Shikari pulled off a blinding 75 minute 14 song set amidst a terrific stage production.  If Rou was still under the weather he hid it well.

In my book, and I make no apologies for stating this, Enter Shikari are the best live band of their era. They are endlessly creative, they care about their fans and they want to do the best they possibly can every time they set foot onstage.  I really believe they will continue to grow as a band and one day, not too far away, they will headline both Download and Glastonbury.  Enter Shikari also demonstrate that nice guys can be winners too.