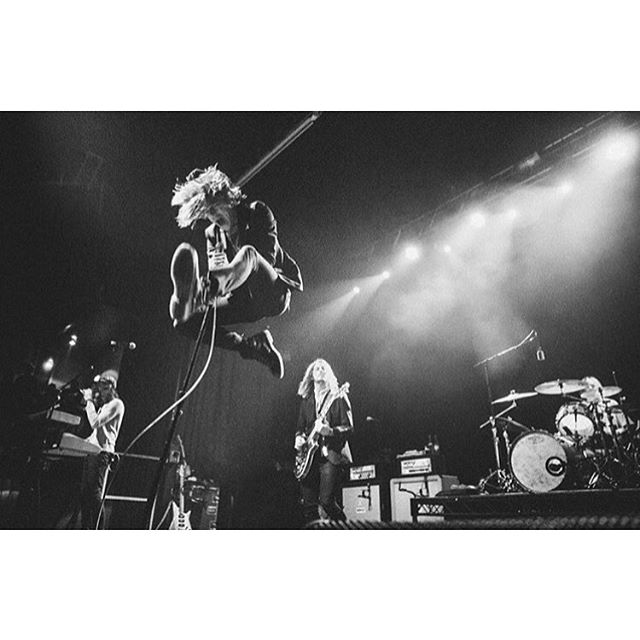 Touring their fourth album, Tell Me I’m Pretty, with a stop off in Liverpool, the Kentucky rockers chat to Louder Than War about Kanye West, dreams about synths and the unbridled love they have for the city of Nashville.

It’s 6:20pm backstage at Liverpool’s O2 Academy and Cage The Elephant’s Matt and Brad Shultz are surprisingly calm. Matt’s supping on a coffee, whilst Brad sits patiently across the room. Later on, the band will put on a show that is at times so magnificently intense that towards the end, a handful of people in the crowd will be seen running to the edges of the room to spew. The voms are by no means a sign of disgust, but instead the result of too much booze and a complete underestimation of the frenetic carnage awaiting them at a Cage The Elephant gig.

Although relaxed now, later tonight the two will be unstoppable. Matt bouncing around the stage, bursting out of his skin, with Brad hunching over his guitar clawing out the hooks as he incites a wild and sweaty mosh pit out front. But before all that, Louder Than War sits down with the lads for a chat.

What are your favourite moments on the new album?

Matt: I like ‘Cry Baby’ a lot. I like the switch at the very end when the bassline starts slowing down, and the band kind of picks back up,which was actually an accident when we did it, but it worked out because Tichenor slowed down too much and then the band kick back up to speed, but it created this really cool moment.
Brad: It took it from a rock and roll, psychedelic bluesy feel to straight, swamp blues – kind of like Creedance Clearwater.
M: I feel super connected to the lyrics in ‘Sweetie Little Jean’. I had a dream about the synth part on that. I was trying to map it to Matthan and Tichenor and I was like ‘it sounded more like bwow bwoawww’ and so Matthan took his keyboard and ran it through some guitar pedal and dialled up the sound. In my mind the sound was green.
B: When we hit it, he was like ‘Yeahhhh, that’s what’s up!’

Do you have any regrets up to this point? Would you change anything?

M: Yes. One regret, one super regret. When we first started out and was super young and impressionable and stoked to get out of a tiny little town in Kentucky, we came here and the label we signed to, on paper it looked great because they promised everything, but in real life it was like we’ll give you this, if you do this, it was this weird barter system. One of the things they had us do was use Kanye West’s stylist for a couple of our first photo shoots and it was SO bad. So unbelievably bad.
B: She dressed us in all neon. We looked like Marty Mcfly from Back To The Future.
M: Any time I see any of those pictures come up, I’m like ‘why God, why?’ But that led us to be less impressionable and so firmly rooted in our convictions.

What was the last really significant gig you saw?

M: This is kind of funny considering what we just said, but the last time I was actually out-of-body-experience-blown-away was Kanye West in Nashville. It was such a good show, rarely do you see somebody else perform and you’re jealous. I was totally jealous of what they put together, the aesthetic of it, the symbolism of it, the performance, everything was just really strong.

Where is your favourite place in the world?

B: Nashville, Tennessee. It’s home, and I love that city. It’s a very artistic city, everything people do, they do with their hearts there. The food, music, art, people are very conscious about putting love into everything and there’s a lot of really inspiring things in Nashville right now.
M: I don’t have any one particular place, I could probably pick out a handful. Japan surprised me. When we were in Tokyo, it really was like being in the future, otherworldly, it was crazy. The fashion sensibility, everything was just super wild.

M: When you’re playing, they’re losing their minds.
B: Then you stop, and it’s complete silence, you could hear a pin drop.
M: Because they’re trying to be so respectful, it’s really interesting.
B: People in Japan are also really passionate about what they do. We played a festival called Fuji Rock and by the time we’d got off stage they’d already edited, mixed, mastered the sound and everything on a DVD of the show. As we walked off the stage they handed it us and it’s one of the best recordings we’ve ever had.

B: Happiness is a Warm Gun – The Beatles, Well Well Well – John Lennon.
M: Under Pressure – David Bowie & Queen, America – Simon & Garfunkel. The Boxer – Simon & Garfunkel. I could listen to those songs all the time, because the thing with Simon and Garfunkel is, the level of honesty is so incredible. That lyric that begins, “Asking only workman’s wages, I come looking for a job, But I get no offers, Just a come-on from the whores On Seventh Avenue,” is him talking so openly about something that is taboo.
B: Bob Dylan – Lonesome Death Of Hattie Carroll. That song’s great too.

M: I would take Dune by Frank Herbert because it’s freakin’ huge and you have to read it a hundred times to understand it.
B: I don’t like to read for enjoyment, just for educational purposes.

B: A shower. If I could take a complete shower with me, that’d be my luxury. I like to have showers. The best shower show possible.
M: Soft toilet paper.

What is the one thing you would like to talk about more that people don’t ask about?

Tell Me I’m Pretty is out now on RCA and sounds much better when you buy it. For more on Cage The Elephant you can check their facebook page or follow them on twitter.