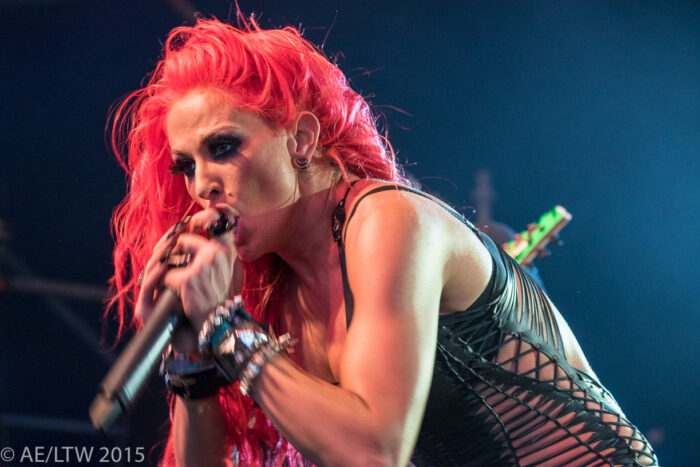 Butcher Babies are a metal band from Los Angeles California.  Formed in 2010 they have already visited the UK twice before and played at Download in 2012.  Butcher Babies are fast gaining a great reputation for their high energy live performances and for the no-holds-barred attitude of vocalists Heidi Shepherd and Carla Harvey. Alan Ewart caught up with them to talk about influences, the West Coast punk and metal scene and being back at Download.

Butcher Babies were one of a very long list of West Coast punk and metal bands who graced this years Download Festival.  The sheer number of bands from that region of the USA seems to suggest  a hugely vibrant punk and metal scene in California but when I caught up with vocalist Heidi and guitarist Henry they were a little surprised that I should mention the West Coast scene.  Heidi told me that “we think it’s a little dead at the moment, we haven’t played a gig in L.A. for nearly a year.”

She did concede that a lot of her friends from the West Coast were playing Download so things are probably just a little quiet in L.A.  Heidi and Henry were absolutely adamant that Butcher Babies are very much a metal band.  “We are definitely not a punk band, our music is definitely on the metal scale though I guess we do have a bit of a punk edge and attitude.”

“Wendy Williams [Plasmatics] was a huge influence on us.  She was so badass, so out there, she just did her thing and didn’t give a f**k what anyone thought.  We take huge inspiration from that.”

I was intrigued as to why Wendy ‘O’ was such an inspiration as she was very much from a different era.  Heidi was forthright in explaining “If you are in this business, especially as a female, and don’t know about Wendy ‘O’ Williams you are doing something wrong.”

“Wendy ‘O’ should be a huge inspiration to everyone in the music industry who wants to do their own thing.  You know, f**k that ‘cookie cutter’ world where everyone sounds and looks the same.  I might have been too young to see her in her prime but that doesn’t mean you can’t be inspired by her.” 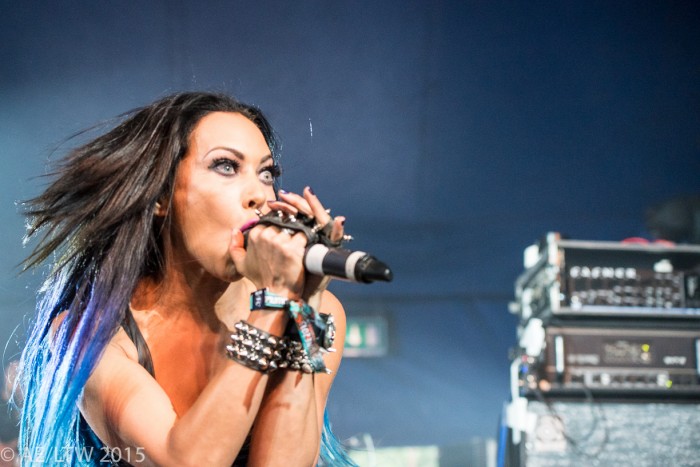 Heidi and Henry revealed that they love Slayer, Slipknot and Pantera though they are really amused that their cover of Pantera’s “F**king Hostile went viral on YouTube scoring almost 600,000 hits to date.  Heidi said, “we were a young band starting out and we were in this shitty little club with crappy sound, the PA blew right before we went on, the whole thing was a big joke and that shit goes viral.”

“We have a ton of our own material so we don’t play that but Pantera have a party onstage and we are a lot like that.  We want to connect with the audience and by having fun we can do that.”

I was interested to find out if Butcher Babies were trying to advance a political message through their music as so much punk and metal music does.  They told me “actually that is something we try to avoid.  Our only really political song is ‘Jesus needs more babies for his war machine’, that’s about the lack of choice we have in the US, especially as a woman.  We are conditioned from birth and have virtually no freedom of choice.”

“Things have changed a lot in recent years in the USA.  I’m patriotic but that doesn’t mean that I agree with the government.  People are becoming much more aware and more cynical about government.  Americans are now much more likely to question what government does and that has to be a good thing.”

“Musically we tend to draw our inspiration much more from our own lives and from our experiences and what we see around us.  We are not really that political though we do write about social and cultural issues.  For example in “I smell a massacre” we talk about how shootings in schools and theatres are blamed on mental illness and no-one takes account of how these kids are raised without love, without care.  No-one looks to see what is going on inside these families.”

Butcher Babies were amazing to interview, they are so open, sociable and interesting.  I could have talked to them all day.  That attitude comes across in spades on stage.  The whole crew are massively animated, they enjoy being together and playing together.  They have so much fun onstage that you can’t fail but to enjoy yourself watching them.  Heidi and Carla were both into the crowd but I think my colleague captured the essence of the band as we walked away after their set.  He remarked, “well I wasn’t expecting that, the singers looked like angels and sounded like the devil!”

I highly recommend checking out Butcher Babies if you get the opportunity.

All words and photographs by Alan Ewart. You can read more posts by Alan at his Louder Than War author’s archive. Alan’s also to be found at his blog soundofsummer.org and you can follow Alan on Twitter as @soundofmysummer.