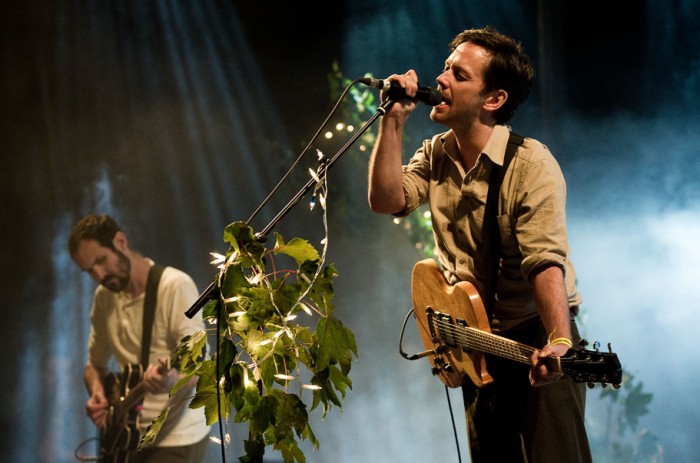 “I could sum up all these album things for you: we haven’t got a clue,” says British Sea Power’s captain Scott Wilkinson. He looks straight at me and then starts laughing. And it’s impossible to keep a straight face, so both myself and the band’s guitarist Martin Noble burst out laughing as well. But seriously… last year was undoubtedly a big year for Britain’s most cherished cult band. As Scott hastens to add, they had a “a lot of good things but a bit too many things.” After an amicable parting with Rough Trade back in 2014, Sea Power proceeded to navigate the choppy waters of rock’n’roll on their own steam. 2015 saw a re-issue of ‘British Sea Power’s classic’ The Decline of British Sea Power and a release of their brass-infused opus ‘Sea of Brass’ on the band’s own label Golden Chariot.

Both records and live shows accompanying them were met with a chorus of praise from all corners of the press world. ‘The `Decline of’ tour reignited the passions of those who’ve always loved the band and opened the eyes of those who were perhaps a little late to the party to witness Sea Power’s early mind-mangled magic. The story of the Sea of Brass looked more convoluted than last Christmas episode of Sherlock: live premier dating back to July 2014, postponed album release and distribution delays were all part of its journey but music itself once again demonstrated the band’s creative vigour and insatiably strange imagination.

Although The Decline of British Sea Power could justifiably be placed in the pantheon of all-time great debuts, the band seem unsure about letting it go. Is it time to put it to bed? Scott offers a reliably uncommitted assessment: ” We always say that. Things get put to bed and then they just wake up again in the morning. It’s hard to put anything to bed in this band, really.”

With only a handful of gigs lined up for 2016, it’s clear the band’s current focus is the long-awaited new record. Having travelled the highways and byways of soundtrack recordings , brass band orchestra arrangements and their own re-issue, there’s now no escaping the obvious: the world wants to hear new British Sea Power songs. “Some songs exist but we don’t know. They could all get scrapped yet and we’ll go back to the start, “ warns Scott.

Martin comes to the rescue, giving it some more context, “I reckon within a few weeks we’ll be able to see where roughly where we’re at.” He thinks for a minute, adding: “We do a lot of stuff at home. It could be that you get a lot of your good ideas straight away and spend a lot of time trying to re-create them. Do them well to start with and you’ve got fresh, really good ideas there.” At this point Scott jumps in saying that his idea was a residential studio in Cuba but to his grave disappointment nobody is making plans for it. Smiling somewhat apologetically Martin explains, “We haven’t quite got the money yet, have we? We might do a Kickstarted thing later in the year.”

But has the experience of last year encouraged the band to go their own way or made them think they’d be better off re-establishing their relationship with Rough Trade, or perhaps even joining another label? The answer appears to be equally open-ended. “We’ve got nothing against it but it could be that we record it all ourselves and licence it to another label; or we could end up completely running out of money and needing to get a label involved. It just depends how long it takes to make the record. If we could do it all ourselves, that would be good. Then we would get our own press teams and radio people.” At this point Scott suddenly throws in, “I can’t imagine that we’ll do an album without Rough Trade being involved.” His reaction is echoed in Noble’s rather understated assertion that last year’s experience of running a label whilst trying to tour and write new material was “a bit of a learning process”; something that taught them perhaps the best way to ensure their manager stays alive is to get other people to take care of some parts of their work.

But not being tied down to someone else’s schedule also gives the band a lot of freedom. At present it’s not entirely clear when the new album is likely to be released but both Martin and Scott seem clear that it will happen in 2016.
“Normally after the album is finished we make up the stories of what it’s meant to be about,” says Scott, smiling. “Mostly it’s lyrics that aren’t finished at the moment. With lyrics I normally write six or seven versions. I do one and I think, “This is brilliant!” A week later I think, “This is rubbish.” He stops for a moment and adds, “Roy (Scott and Neil’s brother, BSP’s biographer and former manager) has been trying to tempt us into writing an album about Europe.” This suggestion meets with Martin’s clear amusement whilst his bandmate carries on explaining, “You know, sort that out in eleven songs. There’s not much happening in Europe at the minute. There’s one about migration. We’ve done that. Covered.” Suddenly he switches to a tone that seems to indicate he’s no longer joking but rather thinking outloud, “Really, if I was brave I’d like to write a really stupid lot of lyrics. It’s hard ‘cos you start thinking about it. It’s all about re-thinking things too much. For me, it’s one of the things I do. My favourite bit is when you start a song. You could do a bit of guitar and you sing a little melody. You might have two or three words, or one line; and then you think, “This song’s finished. It’s brilliant!” After that it’s hard work.” He stops momentarily and comes back to us, smiling: “My own workings of songwriting. Best done on your own with noone else around, so that I can’t inflict it on them.”

It’s clear talking to Scott that this is someone who is a genuine article, someone who has both talent and charisma to eclipse most better known characters of the pop pantheon. Yet, he’s also smart enough to realise the fundamental dumbness and absurdity of the whole business, including the notion of people asking questions about his life and his work. “The other day I went to the pub on my own ‘cos I locked myself out. I had to kill an hour and there’s a pub round the corner. It was brilliant!! I got a newspaper. I’ve read the whole thing. Had two pints. Had a go on a fruit machine. It was the best, or one of the best hours, I’ve had this year.” You certainly can’t accuse him of taking himself too seriously.

With the band spread over three different locations the logistics of working on a new record seem surprisingly uncomplicated. “We get stuff from Skye, then when Woody comes down he can drum to the stuff that’s been sent down. With digital stuff it’s easy.” Scott’s version on the same story is slightly more poetic and ludicrous: “Basically, they record passing whales as they swim past Skye, send them down the broadband to Brighton ‘cos we can’t get any whales in Brighton. Just the odd submarine.”

Drinking red wine, Scott continues, “My personal theory is that we all do our best slightly drunk. As long as you know roughly what the song is.” He proceeds, saying “the new album will feature a lot of drunken drums,” but reassures me that “it won’t be sloppy”, more of a “perfectly tuned and enhanced groove.” At this point, as if by magic, Woody appears bearing a box of Quality Street. Scott thanks him, adding with a conspiratorial smile, “He’s just snooping.” Enjoying Woody’s chocolates Noble continues talking about the drummer, “It’s a different way of writing with Woody. In the past you’d just start with a basic idea and play along Woody. Now you’ve got a rough demo and you’ll sort of record to separate bits.”

For now there are plans for a new single, which could have happened at the end of last year but Scott admits that he “got distracted”: “I went in to do one song and did eleven.”
But I’m informed that Woody was on top form, so it’s all good. “We just need to focus on one thing ‘cos other distractions are not good. I’m trying not to think about other things,” says Martin. And then Scott once again sums it up for us: “I’m a bit bored now. I think we’ve done enough of the old stuff, I’d rather do something new.”

People of the Midlands – rejoice and embrace the glory of British Sea Power! The band are playing the following shows later this month.

For more information about the band and Golden Chariot releases visit https://britishseapower.co.uk

Live photo by Melanie Smith. More work by Mel on Louder Than War can be found at her author’s archive. You can find her on Facebook and Twitter. Photography portfolio can be found here:mudkissphotography.co.uk.