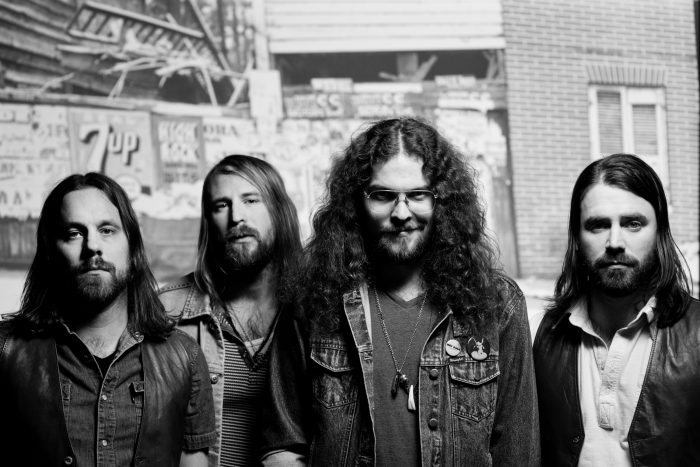 Self confessed hard workers, Monster Truck are earning themselves a well-deserved name in the rock and roll industry. Sophie Sparham spoke to Brandon, organ player for the band, to find out how the past year has been for them and what’s in store for their UK tour.

So far pretty busy, we had the first two weeks of January off and we’ve been busy ever since.  We did a tour all built around going on a cruise. They now do themed cruisers so every kind of music has a cruise. They charge so much money and fans pay it. It was our first time doing it, it was kinda cool in some ways but it was weird being trapped on a boat with so many fans.

Papa Roach headlined and Sevendust, Alterbridge, Breaking Benjamin and all sorts of bands were there. It started in Miami and the weather was great!

You released your latest album last year, an album which is a progression on your past material, now you’ve had time to reflect on the record what do you think about it?

It actually came out just over a year ago, we almost haven’t had time to stop and have a look around, we’ve been touring so hard, but the songs really translate well into our set.

At the same time, we’ve been working on new songs the whole way through, which were super proud of it. We’ve got band out so much further but we’re still marching through. We’ve had so many good opportunities, we’re really lucky.

Do you think the album has opened more doors for the band as your sound has changed?

I think we’re changing at a good rate, we’re not aliening people who likes us in the beginning, our sound is just maturing. We’ve still got the same vibe, we’re just learning how to do it better and touring with bigger bands which allows us to be in the rock scene around the world.

We’re seeing what the audience responds to but not comprising our vision too much either, it’s a good balance. It feels like a natural process with our music, we don’t really try to hard it just kind of happens.

And you say you’ve got material for a new album?

We’ve got no touring booked after we finished the run with Deep Purple in June so we’re hope to record sometime in the summer.  We do have a bunch of songs, between ten and fifteen, that we’ve already done and a lot more ideas floating round.

It’s hard to demo and write new songs when you’re on the road so we went home in between doing festivals and spent most of the weeks in the studio demoing new songs. We’re always working.

We were also lucky that we’ve been touring with bigger bands have had more space. When we toured with Nickelback they were all really big venues and we had big dressing rooms and had more than one and so we had a little portable set up.  Steve has an electronic drum kit and we can write and demo in the dressing room. We’re using all the tech available, you couldn’t do it ten, twenty years ago

The UK is mad about your music- what’s your favourite thing about touring over here?

It’s a different world over there. When you grow up in North America you have a fantasied view of Europe and the UK.  You see TV shows and movies so you’re excited to get there. I like history and seeing where our society came from, so seeing different places is my favourite part.

There’s a real sense of homeliness in the UK. It feels like home far away from home. The history is so cool and the people are so awesome. You guys have a better sense of yourselves and what you like. The art and music that comes out is more true and honest. North America is a scattered brain society, we can’t focus our mind on stuff so long, the UK is definitely more mature.

What would you say to someone going to your show for the first time?

We’re a pretty high energy rock show but we also like to change the dynamics, mixing in slower songs in the set and playing the old rock and roll well like. We want to give a true rock and roll show.

We’re just trying to take all our favourite types of rock from the history of it and make a good balanced version of rock that for rock fans that still need it.

My first love was the 60s. I loved The Beatles, Beach Boys and The Stones because when I was a kid my parents had those records. They started my love of music.

Then I got into punk rock, Rancid, NOFX that kind of thing.  There was a good punk scene in the town where I came from. Then got into 60s stuff again and finally the heavier stuff, I love Deep Purple and me and my buddies would crank up Machine Head.

My whole life I just keep venturing trying to find new stuff. There’s so much out there it’s a never ending journey and I’m just a journeyman.

People don’t like the streaming and mp3 but it makes everything available and that’s so awesome. It’s so cool if you’re positive and use those tools for good.

We’re gonna come over and see you guys, I’m so pumped!  Then we get to go to Europe for our first real official headliner tour over there. Ticket sales are good and excited to play some long sets and play songs we don’t get to play so often.

Then we go home for a month, get the demos together and gear up for a tour with Deep Purple.  Those guys are one of the big influences of our band so it’ll be great to learn from legends up close for a month!