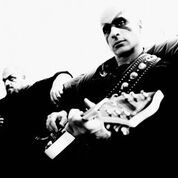 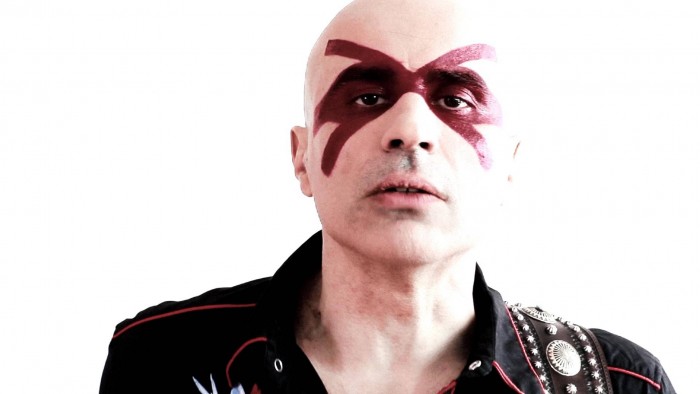 Musical genius Vinny Piana, frontman for “Boy From The Crowd”, has released his new EP entitled, “Where the Bees Come to Die”, a creative masterpiece which lives somewhere between blues and punk.

Emerging from the streets of East London, this diverse band is composed of Vinny Piana, singer, songwriter and guitarist, and Vegas Ivy on the drums. Together they invade the scenes with musical noise, elements of rock, tainted with punk and tantalizing blues, impassioned with choices, ending up with instinctive coherence and sincerity. Both are impressive musicians separately, and together as one, unstoppable.

Louder Than War was fortunate enough to be able to ask Boy From The Crowd some questions, and receive some thoughtful answers regarding music, guitars and interesting choices.

Louder Than War:  You have an amazingly cool sound, who were your musical influences growing up and whom are they now?

Thank you.
The first band that really got me into music was The Cure. I just didn’t know such music existed. My parents were not musical at all. We didn’t have any music being played at home and I thought music was what was on TV music chart programmes, which mostly sounded a little silly to me. The Cure opened a brand new world for me. I got mad into music and I then discovered all the cool alternative bands. I borrowed a crappy guitar off a friend and I had to hide it under my bed because my dad was “against it”. It was seen as an unwanted distraction from school work sadly. The first song I played on guitar was 10.15 Saturday Night and I remember showing off the little guitar solo to my friends (In fact I think they do that little solo on bass). {laughter}

Nowadays I listen to a lot of blues. Of course the 3 Kings: BB King, Freddie King and my favourite of them all, Albert King. I listen to Robert Johnson too and all the oldies. We will cover one of his songs on the album. I just got permission from the publisher. So excited about that and we will endeavour not to make a mess of it! And of course I love Stevie Ray Vaughan and Jimi Hendrix. They are my guitar heroes.

I love Nick Cave & The Bad Seeds, The Doors and Bowie, Iggy Pop, the Cramps etc. I guess I just listen to old stuff mostly and these are my main influences today.

I love your theory about the imperfections that makes rock ‘n’ roll great. Can you expand on that?

It has become our motto. We printed it on the Vinyl and CD back covers too. When we play live for example, things are often on the verge of collapse. In fact they did collapse once or twice. I remember our very first gig, Vegas was naked after the first song!!! I turned around and he had stripped off, on the very first song of our very first gig! Hence I could not hear the drums being played any more. We don’t do that every time, but we want to be spontaneous when it comes to performing and playing our music, which in essence is a heavy form of blues with a pinch of punk rock. We often make mistakes and, with only two of us in the band, we are exposed. But we do give it all. Same thing when we record. And that to us is the spirit of Rock ‘n’ Roll.

What does the eye creation you paint on your face symbolize?

You need to see our logo which is on our EP cover. It is a cartoon face with cross eyes. Just like our motto, we identify massively with our logo. We call it “The little guy” and we have come to refer to him as a better version of ourselves. We often have conversations about something that happened and say “Our little guy would have done this or said that” instead of being pathetic like me and doing or saying something stupid. It is weird and it may not make sense to others but we identify with him. He is not just a drawing, he is real to us. So, when we started playing live, it took us about 5 second to decide to imitate our logo and paint our faces to look like him. It makes perfect sense to us. We put the make up on and we’re ready for action.

Do you plan to tour in the near future?

Yes, yes, yes. This is something we have not cracked at all. We play isolated gigs here and there, but we have no idea how to get on a tour, a support slot with a good band, etc. We need to work this out next. The record label we are on (Public Pressure Records) is great but pretty new and quite small so I’m not sure how much they can help on that front. We are recording the album right now and, as soon as this is done, we’re out to play gigs, for sure. I expect this will be around March 2016.

Do your songs have a message, and if so can you pick one, anyone, they are all really good and tell us what the song means to you?

My songs are often a reflection about choices we make and how they lead us to bliss or sheer disaster, how we so often make the disastrous choice despite every fibre of our being screaming at us not to. Basically something I am excellent at doing! An easy one to explain would be The Road. I wrote it after reading the famous poem The Road Not Taken by Robert Frost, where the author basically puts forward merits of choosing “the road less taken”. It is the harder path to choose: you may feel isolated and live a more precarious life, but ultimately a more satisfying and rewarding one. This resonates with me so strongly. I used the poem as a strong base for the lyrics of this song.

How did you come together and how long have you been playing together?

We met in a rehearsal studio in London. I was playing on my own in one of the rooms. Vegas was the studio manager. He heard some of the stuff on the other side of the door and asked if he could sit in on drums. 15 minutes later, we were a band! We’ve been doing this for a year and a half.

What’s coming up for you next?

Finish the album and play live. As soon as possible!

What is the favourite question that you’ve ever been asked?

Favourite questions are always the ones about guitars. I can talk about guitars until the end of times. Don’t ask me about guitars. I will bore you to death. It is a promise. But the funniest question I had was from a Spanish journalist. I don’t think he meant to be so abrupt, it was more a case of a language/translation thing. He asked me “If you could grow hair today, what hair cut would you have?” Top question to ask a bald man! {Laughter)

Watch the video for “All I Need”: