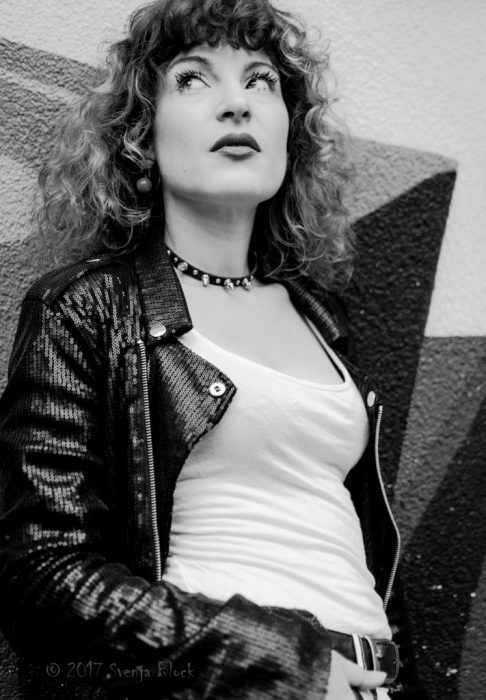 Berlin riot rock band BONSAI KITTEN are back with the release of their fifth studio album MINDCRAFT and Louder Than War’s Svenja Block recently found time to speak with frontwoman and founding member Tiger Lilly Marleen while wandering the streets of Berlin Kreuzberg.

Prior to our conversation I had wondered how the band manages guitarist extraordinaire Highko’s commitments as a full-time member of the Adicts, which requires him to play away overseas on a regular basis but a palatable schedule has been worked out to enable the current BONSAI KITTEN two-part tour across Germany.

I was keen to learn about tales of Lale Andersen, Yoko Ono, discussing bass guitars, and returning to the UK for new gigs.

Louder Than War: Please tell us how your name Tiger Lilly Marleen came about.

Marleen: My real name is Marleen. This is a mix of Maria and Magdalena. But whenever I met someone and told them my name, they would associate it with the famous song “Lili Marleen” by German chanson/singer/songwriter Lale Andersen, which is about a whore during the Second World War – you may have heard it before (the now legendary song proved hugely popular with both German soldiers and Allied troops but the Nazi officials didn’t approve and “Lili Marleen” was subsequently prohibited from being played on the radio). I was also wearing a lot of leopard print at the time when I got into music, because I liked the style and people kept calling me Tiger Lilly, on the streets or at our first encounters. In the end I combined these names which were given to me for fun and it became Tiger Lilly Marleen.

LTW: Your new BONSAI KITTEN album MINDCRAFT is out now and it is brilliant, please let me say this! Let’s start with the most striking change to the new album: You changed the upright bass for an electric bass. What triggered that move?

Marleen: Oh, thank you! Well, the decision to part completely with the upright bass was not planned in general, but happened rather naturally. In 2014 we had some line-up changes in the band, and been looking for a upright bass player for quite some time. But it is not only the upright bass that is important, but also the person who plays it. When you are looking for a new band member, you are looking for a new team player, a new member of the gang, the family. These are way more important qualities than just the kind of instrument he plays. Our “new” bass player Marcus “Spoxx” fits perfectly into our gang now and the fact that his “three-string” e-bass also had a positive effect on our sound made us all very happy. I want a group of friends being together on the road, playing the music they created together, have fun, and bring joy to the people.

LTW: Your sound has changed accordingly from punk-a-billy to a rockier sound – how do you perceive this change as a band and how has the change been perceived by Bonsai Kitten supporters?

Marleen: We have always shaped our own sound since the very beginning of our band. This was never one hundred per cent psychobilly or punk, but always a musical mix of what we all liked in rock´n roll music in general. The change of instrumentation has evolved organically and now the e-bass really pushes our new songs even more energetically forward and reflects the sound we want to play as a band in this constellation today. The decision of leaving the upright bass behind came already three years ago. MINDCRAFT is the first album now, for what we wrote and recorded all songs with our “new” e-bass player Spoxx. We are very proud and happy about this album, because it absolutely reflects us how we are as a band now. And ultimately it is about the music, the energy and the message you convey and not with which instrument it is played. This kind of understanding is what brings our audiences together because they feel the same way and that is, what connects us with them. 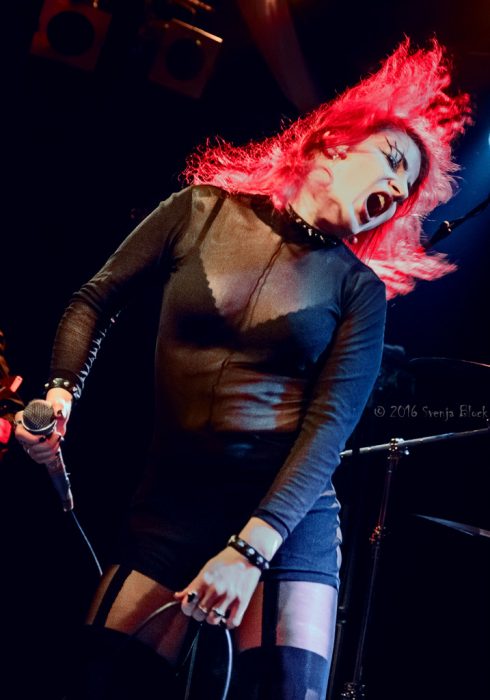 LTW: How did the songwriting come along with the new album?

Marleen: The songwriting for MINDCRAFT didn´t go any other way than it always does. I have a bunch of melodies in my head all the time. I record them and sometime have chords composed on the piano for them already. Highko has many guitar riffs “flying around” and we combine them to raw song ideas, that we then present to the other band members. We work with Alexx DeLarge and Spoxx on the completion of the song ideas until they are ready to be played live and recorded.

LTW: What has influenced the songs for the new album?

Marleen: Everything that takes place in our lives every day. In the media, in the world and in our communities. I do not think of any stories, but put my raw emotions, experiences, and anger into the songs. I often struggle in this world, you see. I am angry of how unjust it is and try to change the world to be a better place with everything I do. This world and our society is a very competitive place, which makes us all ill and uncomfortable in our own skin and mind. I strongly believe that if everyone would be able to do what they really want and be the individual they desire to be, regardless of gender, colour, religion and status, that we would all be happier and care about each other more than we do now. Songs like “Unfuck The World”, “Mindcraft” or “#DWYWTD (Do What You Want To Do)” clearly reflect that.

LTW: I’m intrigued about “#DWYWTD (Do What You Want To Do)…are we crossing borders into personal space here ?

Marleen: This is the mantra song for me. It has a motivating impetus and a clear message. That is why I repeat the text as often as a mantra to get to people. So many people go after a job they do not like, they surround themselves with negative people or run after a wrong ideal. Free yourself from your ego and step back to see what you really want. I also wrote the song for myself ;-) 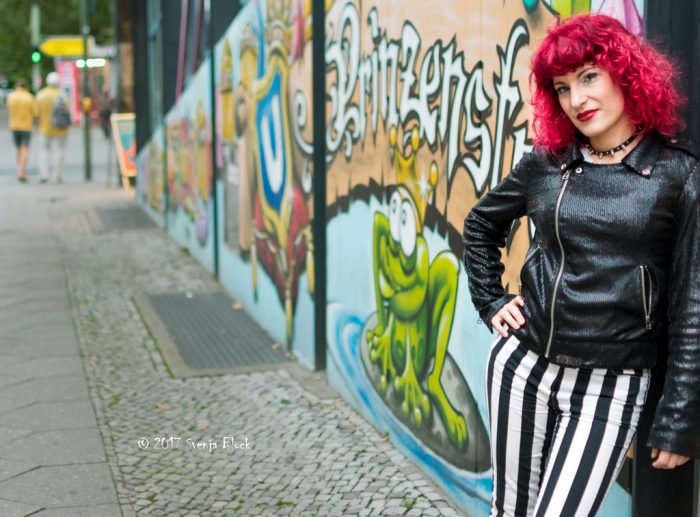 LTW: What else was important to you for the sound of MINDCRAFT?

Marleen: Highko wanted to play more versatile guitars this time and be more experimental. There are more acoustic guitars and many different guitar sounds on MINDCRAFT. He would even record with four amplifiers at the same time. This gave the album a big, great sound. For me, I just wanted it to sound epic. And it does!

LTW: You did a cover version of the Japanese song “Haruka Kanata”. Please elaborate.

Marleen: The Japanese song has a similar message to “#DWYWTD”. It just describes more action and impulse than the mindset. My neighbour and good friend Kei Ichiyanagy is Japanese and has explained the message of the song to me: It is to always go on, take a risk, put everything on one card for once, step on the gas and go ahead before your world turns all blank. Kei can also be heard in the intro on our album DONE WITH HELL. Fun Fact: He is the son of the famous Japanese composer Toshi Ichiyanagy, who was Yoko Ono’s first husband, before she eventually married John Lennon. Kei has inspired me to do the cover of this Japanese song because of its wonderful message.

LTW: The last song on the album “Life Will Never Die” is a beautiful ballad …

Marleen: Well, for me, the inspiration for the lyrics was to see how nature takes its place back, no matter how we humans pollute or destruct it. It’s a hopeful song with a lot of emotion. The melody and lyrics to the chorus just popped into my head when I was walking down the streets one day. The intriguing guitar theme came from Highko, and was a very good match, the song was finished very quickly with acoustic guitar and voice. When we were producing it in the studio, we decided to add a cello but nothing more. Maybe we will have the whole band play it someday.

LTW: What does the future hold for BONSAI KITTEN and Marleen?

Marleen: We just finished the first part of our tour and will continue to be on the road in December. We have big news coming up, that we cannot talk about just yet. But we will tour internationally, that I can reveal. Additionally, we are planning to do another UK Tour, because we loved touring over there! We will release some new music videos and may record some new songs, who knows! So keep an eye out and check our Facebook page or sign up to our newsletter for more news coming up. Thanks!

Bonsai Kitten’s album MINDCRAFT is out now on all formats. 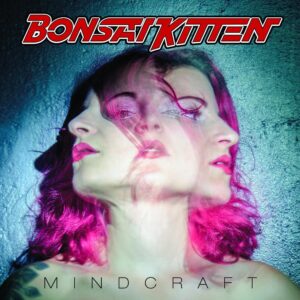 More info on Bonsai Kitten can be found at their official website: www.bonsai-kitten.de. They are also on Facebook.

All photos and words © Svenja Block. You can find more of Svenja’s photos at her Flickr, Facebook and at her Louder Than War author’s archive.