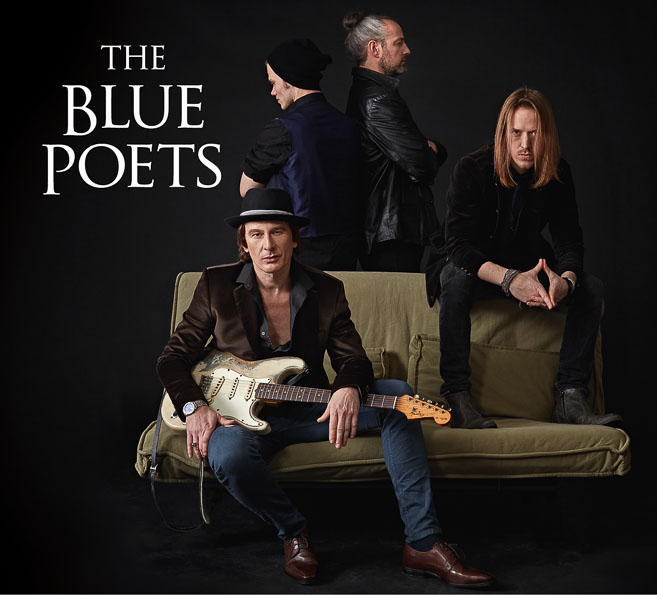 German blues rockers The Blue Poets, have recently released a full-length “self- titled” album, filled with a kaleidoscope of heart and soul.

Guitarist Marcus Demi, winner of “American Guitar Player Magazine’s Hero Award”, is also the producer and songwriter of this debut release. He is also the founder of his own record label, “Triple Coil Music”, and says that all of the tracks were recorded live and mixed on analog tape with no corrections, no tricks, and no computers.

Louder Than War caught up with Marcus, who discussed his music, his record label, and his influences.

Marcus, how does being a songwriter, producer and musician make it easier or harder to get a song to the final mix?

I guess my expectations might be higher, as if I was just as the guitar player. I try to see the overall picture, and I am fairly critical to every instrument, The mix; the Mastering and the message of the song, that I am trying to get across. So, yes, it might be more difficult.

What does ‘Blues’ mean to you?

To me, Blues means being sensitive. It doesn’t mean you have to be miserable all the time. It is also the easiest way to express yourself. It is also a language, that most people can relate to and understand, even if they don’t listen to any Blues music.

Marcus, what guitarist had the most inspirational effect on you growing up?

I have many influences. But this album is a reflection of my childhood heroes: Hendrix, Blackmore, B.B,King, Johnny Winter, Gary Moore, Frank Marino, Rory Gallagher.

Are you planning to tour to support the New release?

We are already playing. So far we’ve only played 8 shows in Germany. But we already have confirmations of other countries.

Is there anything that you do in everyday life, when you’re not in the studio that contributes to your musicality?

Well, I am practicing everyday. My playing and my songwriting is also a direct reflection of all the things I soak up.

What does performing live mean to you?

It is the most rewarding aspect of all this, since you get a direct reaction from the audience. You also realize which songs are the strongest.

“Sunshine of your Love”, is a fantastic cover, one of the best I’ve ever heard, were the rest of the songs on the album all originals?

Yes, they are all originals.

Is there anything else that you would like to permit us to talk about?

I think it’s all being said in the music.

What’s it like owning a label in today’s music industry?

I think it is the only way to do it nowadays.The regular record labels seem to only tell you why you can’t do certain things. Why you’ll never make any money. What you have to do in order to be successful. Running a label means creative freedom. You can play and release whatever you want. It means, you create the music first and than think about the marketing, It also means working 12 hours a day, but I believe that there is no other chance, if you don’t want to be a stereotypical artist….