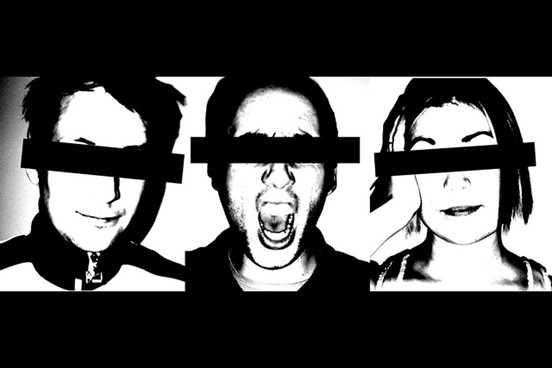 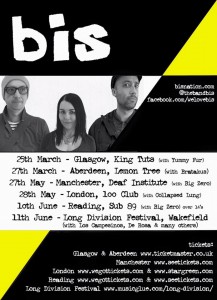 Twenty years after their iconic TOTP performance of Kandy Pop and as they prepare to head out on tour across the UK we caught up with Manda Rin, Sci-Fi Steven and John Disco about all things bis.

This is the second part of our interview with the band – you can read the first part in issue three of Louder Than War magazine available from WHSmith, independent newsagents or online now.

“As soon as we went to the US it made me realise how tiny and unimportant the UK could be. The UK was all I’d ever known, but this was a different league with music and labels. However, they didn’t really understand any band that wasn’t your standard vox, guitar, bass and drums back then which I think always made it tough for us.

“Japan was just immense and an incredible experience. So different to anywhere, and to be involved in Beatle-mania type frenzies was just unreal. The fans were so sweet and generous, basically like a dream place for me especially with my love of Manga and gadgets.”

Manda Rin, of lo-fi disco-pop legends bis, reflects on the attitude toward the band from abroad after the initial UK music-press led hype around them was quickly quashed by the same ranks. Forming in 1994 it’s 20 years ago this month since their iconic TOTP performance of hit Kandy Pop – a sugar-high toddler knee-sliding across the dance floor and crashing the Britpop buffet.

John Disco is blunt in his views about the band’s fortunes at home and abroad: “We were fortunate to have a double-dip and cause a stir in Japan in 1997. It didn’t last too long because the portion of music fans that followed us in Japan were largely influenced by the UK rags, NME and Melody Maker. And yeah, our reluctance to do Kandy Pop pt II. That’s not to discredit those fans who still exist out there.

“The US and Australia were the perfect antidote for the negativity coming from the press back home. Although we didn’t ‘crack’ them, we absolutely made a mark, and the positive energy we took from these places a massive fuck-you to the miserablist UK press.”

The build-them-up-knock-them-down cycle was running full pelt as bis emerged, teenagers with a lo-fi aesthetic and a quirky pop sound built from their love of loads of genres. Sci-Fi Steven recounts the whirlwind they got caught in with their early releases:  “Even at the age we were when things kicked off in the music press, we were aware enough to have seen what other bands had been through. By this time, I think we understood we were going to be a ‘love them or hate them’ band, but we also considered ourselves a pop band and took all the press coverage that was coming.

“We’d grown up with the NME and Melody Maker, but also with Smash Hits and home-made fanzines. We just answered everyone’s questions and it was up to them how they spun the answers. The UK is a small place, we had our fans and we inspired fairly vociferous hatred in others, but the rest of the world seemed a bigger challenge in terms of being noticed and standing out.

“In the US, we were pretty much seen as a quirky new-wave party band like The B-52’s or Devo but from a lo-fi perspective – not really chart material.

“We had instant success in Japan, but that was mostly based around Kandy Pop being a radio hit. When we came back a couple of years later with Eurodisco, no-one seemed to get it whereas Eurodisco was the first song that got us anywhere in Europe.”

With a reputation for the kitsch and the quirky the band had endorsements including a special edition Casio G watch and providing the theme music for the Powerpuff Girls cartoon. Steven is first to talk about the weirder moments for the band: “I guess the whirlwind of interest from labels in the early days was, on reflection, a weird time.

“Meeting Nathan McGough, former manager of Happy Mondays who was working for a label at the time, really justified my teenage years obsessing over records and of course, hanging out with the Beastie Boys would have been unthinkable just six months earlier. The watch and the cartoon just seemed like “normal” progressions at the time.”

Manda continues: “Being on the cover of Japanese Magazine ‘Composite’ dressed as a Japanese schoolgirl was quite an experience. Being quite perverse anyway I’d have done it nude if the money was right, but they never asked.”

John sums up: “My massive love for Gary Numan’s 1978-1986 output was probably responsible for us doing our oddest ever support tour. With hindsight touring with the Foo Fighters in 1997 was bonkers, but they did ask for us and we had to say yes.

With a single out for Record Store Day the band are heading out on a few dates during spring and summer. Steven gives some insight into what can be expected from the shows: “We’ve been playing live with a ‘real’ drummer and bassist over the last few years to give us a bigger sound for festivals and small gigs alike but this year we’re taking it back to the three of us with drum machine.

“It’ll be truer to the old songs, and the new material is going to be more machine based so it makes sense. No doubt these gigs will be as sweaty, stage invade-y and voice lossy as ever.”

bis are on tour this spring. Catch them live:

The first part of this interview is in the March 2016 issue of Louder Than War magazine. You can find it in WHSmith, independent newsagents or order online here.

Interview by Sarah Lay. You can find her on Twitter and read her other articles on Louder Than War here. She also provides LTW’s recommended track of the week on The Rumble with Pete Darrington, Tuesdays from 8pm on Radio Andra.