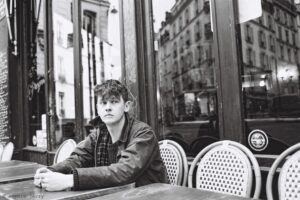 We catch up with Bill Ryder-Jones ahead of the live debut of his album, If, at Manchester Cathedral.

Louder Than War: Your debut album, If, was released three years ago. Why is it is premiered live now?

It was never considered earlier really. I only started playing live at the start of last year then I was able to perform. The album came out way before I was mentally capable to perform at all.

You know the logistics of a mainly symphonic record it costs a lot of money. I still don’t have the biggest following so I don’t get enough people into a room so I can’t spent thousands of pounds on an orchestra.

What’s the connection between If and literature?

The idea behind the record was to make a musical interpretation of a novel. The novel was ‘If On One Winter’s Night A Traveler’ by Italo Calvino. You have to invest in being a character of the novel and you start reading the first novel and for some reason your novel is printed incorrectly.

You get one half where you got a chapter of ‘If On One Winter’s Night A Traveler’ and then you got another chapter of another novel. So you go on a journey to find what these novels are and ultimately through the journey you end up with ten of these passages which are ten first chapters.

I thought it was interesting to write one piece of music  for each of these opening chapters to different novels so that’s what I did.

What special guests can we expect at the show?

Not real special guests. Well, they are special to me. It’s not like a kind of shindig with loads of celebrities. I picked the people who played on the record and some of my best friends. They happen to be talented musicians in their own rights.

Sean Payne, Kevin Mooney, my bass player. Emma Leatherbarrow who has sung on the record, she has got a project at the minute, her artist name is Minnetonka. Liam Power, the singer and songwriter of By The Sea is playing the guitar. And another friend Francesca Ross is going to sing on a track. And Jon Hering is going to play the piano.

The real stars are the Camerata, the bulk of the perfomance is going to be them on their own.

What’s your part in the performance?

I sing on three tracks, there are six tracks that don’t feature me or any musicians except the Camerata. I’m playing a bit of guitar, maybe a bit piano. I haven’t decided yet. I think it’s right to leave things until they feel right.

How were the rehearsals?

I had one last night. It was just me and the orchestra and the conductor. We just went over the pieces that they’re playing on their own. I’m not classically trained so I had to explain some things to them that aren’t as sophisticated as the things they usually play. They might see some mistakes, but they sympathetic towards that.

I got a rehearsal with the band tommorow and another one a day before the gig. It’s kind of of nerveracking because normally you rehearse a lot, especially with an orchestra. But it’s a lot of fun not to exactly know what it’s going to be.

How did you magage to write a mainly classical album without an classical education?

I dunno. I just made it up (laughs). Well, I have an understanding of music and that will generally see you through. The whole institution of classical music has answers to things I don’t understand. I kind of educate myself. I know enough rules to get through.

For me my talent is finding a nice melody. Most of my writing comes from thinking without a guitar, picturing what could happen, the challenges not getting out of your head. I am probably overhumble and I do probably know more than I’d like to admit. There are definitely things on that record you wouldn’t do really. But there are no real rules. You can do what you want, as long as it’s physically possible.

It’s good not to be afraid of feelings. Failure’s nothing you should worry about, particularly in music. It doesn’t mean anything. There’s no real failure unless you set a target. The only target I set is that I want to be true in music. Don’t want to set a number of sales on anything I do. That would be a strange thing to do. I consider both of my albums a success.

What sort of literature does inspire you?

At the minute I’m really interested in authors like Graham Hancock, Robert Bauval who are questioning our understanding of civilization and how far back it goes.. They believe that there’s a part of civilization we wiped out, sort of Pre-Babylon. That excites me.

I read a lot of books. Charles Bukowski is probably my favourite writer. He gave me a lot of confidence in the humility of struggle and doing what you love. My record label put a lot of faith in me and I felt quite embarassed that my albums sold narrowly. When I found Bukowski I found that you don’t have to be embarassed by the level of success you obtain. You just have to mean what you do. And if what you do is worth something you will catch people’s imagination. I saw how many people did enjoy what I do, I just thought of those who didn’t.

I realized that you shouldn’t care about those people but enjoy the nice things people say. That means a lot to me.

The event takes place on 9th October at Manchester Cathedral as part of the Manchester Literature Festival.

More information on the event can be found here.

Bill Ryder-Jones tours with his second album with Saint-Saviour this December. All dates can be found here.

And if you’re interested in words and music check out Louder Than Words Festival in Manchester 14-16 November.

All words by Louisa Zimmer.  Image by Sophie Jarry.