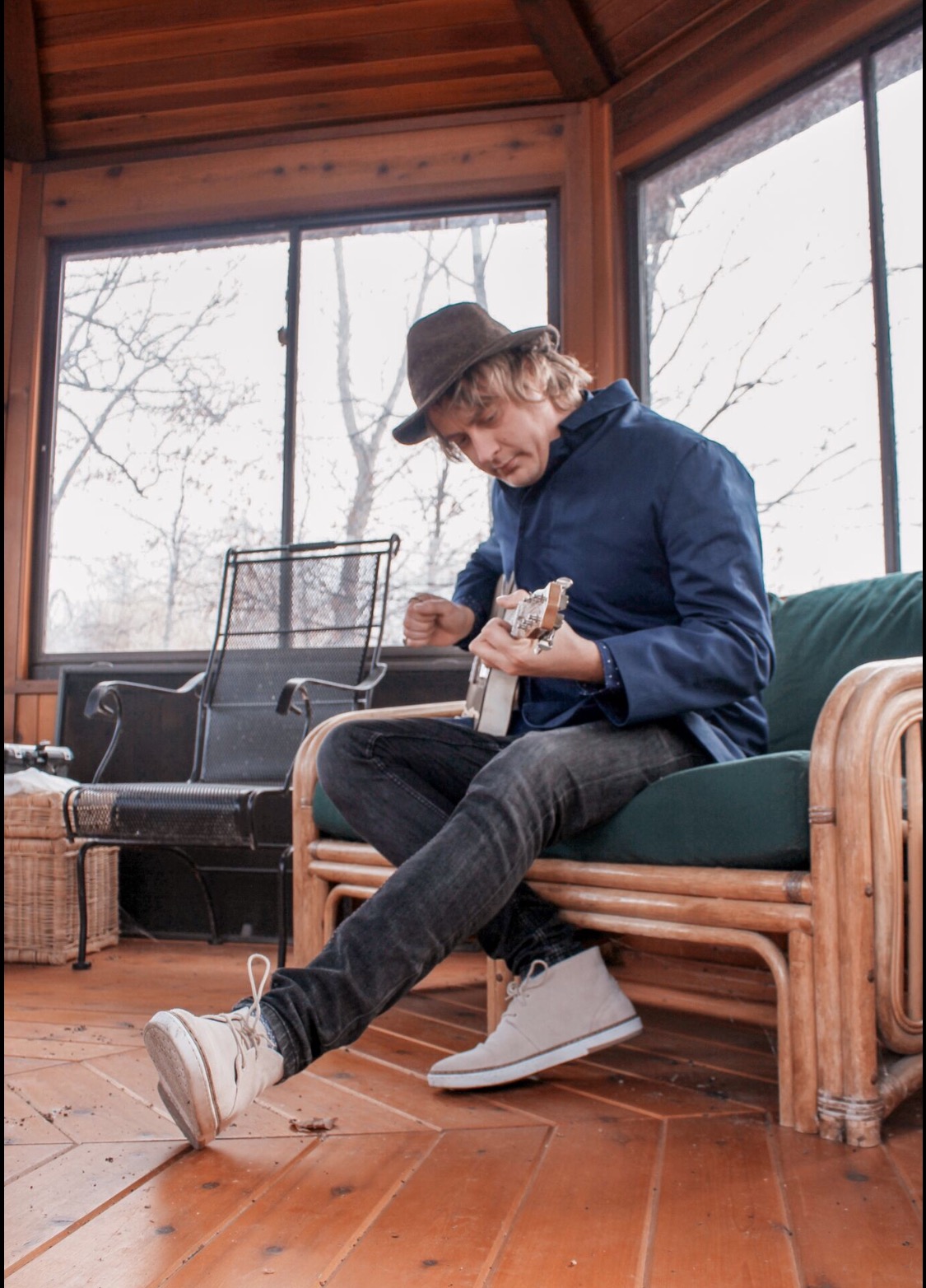 Portsmouth artist Ben Brookes is working on the release of his new album: “The Motor Car &The Weather Balloon”, featuring Michael Bland, Prince’s drummer, Bob Dylan’s keyboardist, Greg Inhofer, and Joey Molland and Mark Healey of Badfinger. With an incredible ability to tell a story, Ben’s music sonically captures the 90’s Britannia youth, with a melodic simplicity, and is known for it’s sharp hooks and dark heartfelt abandon of love and hope. 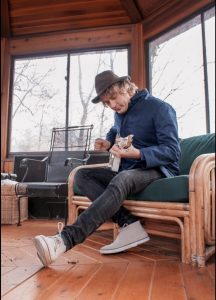 I spoke with Ben about his compelling songs and his urban poetry all recorded in the US to become “The Motor Car & The Weather Balloon”. This is an artist to watch for, he’s going to do tremendous things in the music industry.

Louder Than War: You recorded your music with some amazing musicians, how cool is that?

Awesome. It started, I was under the impression I was going to come to America to meet Larry who had a great band and sorted out called “The Radio Strike”. Nice load of guys, all about the same age around 28/30. We were going to originally record with them. They couldn’t keep the schedules so we had to go with Plan B. Larry found Michael Bland, who was Prince’s drummer, back in the 80s. I believe he played with “Soul Asylum”, “Chaka Khan”, the “Dixie Chicks” he played with too. We were going to use Tommy Barbarella, it was also Prince’s pianist, but he just fell off the wagon. We went backwards and forwards with emails and then all of a sudden he just stopped messaging back. So again we had to have a Plan B and found Greg Inhofer. I was personally delighted to work with him. Bob Dylan is one of my idols.

That’s right. Didn’t he win the Nobel prize for his contribution to music not too long ago?

I mean that’s crazy. He wasn’t there either anyway, was he?

He didn’t. So I’d like to know what is in your head when you write your songs?

It’s a strange thing with me when I’m writing my songs. I could be sitting there in front of the TV and something, the tiniest little thing, maybe it will be something in the background of the show I’m watching, it will inspire me. Something just clicks in my mind. I get a first line and then I start strumming some chords, and it just sort of comes to me within about a half hour. I don’t really spend a lot, only about a half hour to an hour to write a song really. I was reading something the other day, about anxiety and depression. It was mental health awareness day a little while ago. Someone wrote a book called, “The Heaviest Thing I’ve Ever Had to Carry Was My Mind”. It just inspired me so I wrote a song. To be honest I stole that first line, I wrote it into a song. It got 5000 hits on Facebook in a couple of days. I was ecstatic with that. That the people would want to share that sort of stuff. It’s quite an intimate subject. I think where it is quite a raw  thing to write about, especially with people that suffer from depression, anxiety and these sort of things, it’s very seldom ever spoken about. I think it was a great opportunity for me to get out some of my feelings onto paper and let people know how I feel.

When did you start making music?

I started back when I think I was about 11. I got an old guitar, somebody gave me a strata caster, it wasn’t even a Fender. It was really a piece of old shit. I didn’t even know how to tune the thing. I knew that you had to make a chord out of it, I kind of knew what the chord was from playing keyboard at school. I tuned the guitar to what sounded like a chord. I just used one finger and was running it up and down the fretboard. That was that really. I think I was about 14 or 15 when I met a guy called John. We lived in a place called Commercial Road. I could hear one of my favorite songs coming from an apartment block as I walked out my front door. I thought that was really cool and I walked up the stairs and this guy call John sat there playing the guitar on his own. I was singing along with him, and he said I had a really nice voice, and told me that maybe I should start playing the guitar. He lent me a guitar and taught me how to play. I sort of went from there. I think my first song was called, ” Rainbow Days”, I couldn’t remember for the life of me how it went. He taught me a valuable lesson. He said to me, “if you’re going to learn how to play guitar, don’t bother to learn anybody else’s songs. Just write your own songs because there are two types of musicians. There’s a covers artist, continuously going to sing other people songs, or there is an artist in his own right who’s going to write their own music”. I took those words in hindsight and sort of ran with it. I thought that was one of the best pieces of advice that anyone ever gave me. Unfortunately, he turned to drugs, and we don’t see each other anymore. A lot of those musicians go down that road, it’s not for me.

Where do you see yourself going in five years?

In five years, that’s a tough one. On the Billboard 100. I’ve got two children, I’d love to make them proud. I’d like to have made a dent in my music career and really put something on the charts. I’ve got a lot to say and I need people to hear it for my own sanity, really. I feel like I’ve been at this quite a long time. I think it’s about time people heard it.

Well I hope so too. Your music and your lyric is great. Who did you listen to on the radio when you were growing up?

Thank you. Honestly when I grew up it was all about the Brit-pop scene. It was all sort of “Oasis”, “Pope”, “Rialto”, all sorts of those kind of bands. That was my youth. I do listen to that sometimes. Obviously with the sound of the music and the few reviews that people have said, I am sort of reviving the 90s. As I grew up, as I got to about 15 or 16 I started listening to Pink Floyd, The Beatles played a big part of it, The Rolling Stones, all of the classics really. Dire Straits, Johnny Cash was a massive influence on me as well. Bob Dylan, Tom Petty, there is a lot in there. Too many to mention really. I try not to mimic people, I took a little something from everyone I like. Then I try and work it as my own. I’ve got versions of songs, other people’s songs. I never like to play their version if you know what I mean, the version that was played on the radio. I do a version of Pink Floyd’s, “The Wall”.

I heard that, I love it.

I try and make it my own. When I’m starting the song I try to pick it and then later I bring it up a little. Instead of it being that straightforward, “We don’t need no education”, I try and incorporate the other two parts of the song in as well. When I play it, it starts off really quiet and delicate, and then come the part where I start strumming and really uplifting, I literally shout the lyrics. I’ve silenced pups before. People are sort of talking over the first bit and as soon as I hit them with the, “We don’t need no education”, everybody says, ” Wow, where did that come from”. That’s what I like to do, I like to make songs my own, as opposed to doing every other run of the mill. What’s the point, the songs are a very beautiful creation, why shouldn’t you put your own stamp on it?

Just love one another. Have you listened to “Integration”? There’s a passage in the Bible that says “Love thy neighbor” no matter what color, race, creed, or religion you are. We are all human beings, we are all exactly the same. One of the lines in the song, “you cut anyone in half, we all bleed the same”. So, just love one another, get along with your fellow man, otherwise this world is going to go to pot. Hence why I wrote a song about it.