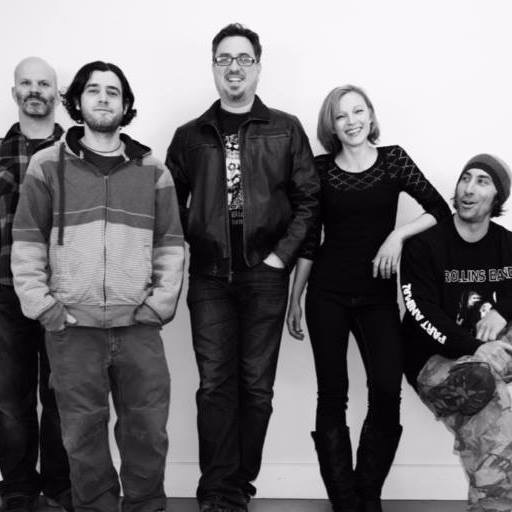 Connecticut based indie the group, Audio Jane, has just unleashed a new album entitled Naive. All ten tracks, although quite different, are all hypnotizing, mesmerizing and atmospheric. 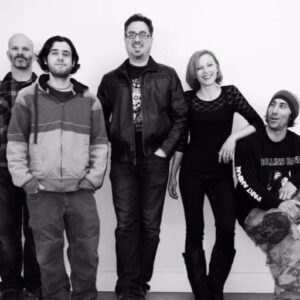 Front woman Sarah Pech, who is also the main song writer for the group, claims that each song is very personal to her, which is reflected in her emotional performance of each song. The other members of the band include: Jesse Perkins, bass, Mike Goldberg,  lead guitar, bass and vocals, Mark Côté, on drums and Dave Ciciltte on second lead guitar and vocals. Similar to Nirvana, Radiohead, Smashing Pumpkins and Mazzy Star, this band sets the mood for a thought provoking, musical journey.

Their newest single Atmosphere, is a beautifully executed piece, up-beat, slightly dream-pop, and a great indication of their artistry.

Louder Than War’s Eileen Shapiro had a chance to speak with Sarah and Jesse in regard to their musicality, their up-coming shows and their future.

Louder Than War: How long have you been together?

Sarah: It’s been about a year and a half, but I had previous line-ups before that.

Sarah: I do. The songs are written on an acoustic guitar, and I’ll show them to the band, and then they kind of develop their part, and we figure out how it should go.

Sarah, you have an amazing, almost haunting voice.

Sarah: Thank you. I feel like the rhythm section gets the least compliments, but they do a good job holding it down.

What do you guys enjoy most about performing live?

Sarah: For me it’s just when somebody is really listening to your music, I mean you put all this effort into writing it, rehearsing it, and playing it. When you finally are playing live, and getting the energy from the audience , people are just listening to your music and paying attention, it’s just cool. It’s the big payoff for all the effort of writing and practicing it.

Where do you see yourself going with your music, like in ten years from now?

Sarah: I guess just doing what we’re doing. Kind of record everything. We have our third album written already. So writing, recording, and trying to get out there a little bit more. We are booking some gigs in New York City and Boston to promote these albums in the spring. Hopefully putting our name out there, playing live, and connecting with other bands, and doing some festivals.

Do you have New York dates yet?

Sarah: Yeah. We’re playing at the Parkside Lounge, right down on the lower East  side, on Friday 7 April 2017.

What do you think are the benefits of being an indie band is?

Jesse: I think that you really open yourself up to create great music, and you don’t have to have it approved by a label or anything.  You  can just follow your own creative impulse, and work together to create music that is interesting, that you enjoy hearing with other people. So I think that is the best part about being independent, is that we don’t have to please a label or figure corporate structure or anything like that.

What impression have you left on the planet with your music thus far?

Jesse: One thing we are doing, and other bands might be doing it too but, we are sort of being influenced by that early to mid ’90s grunge and alternative rock music. I think a lot of people wrote that off and they forget how good that music was. We sort of are reminding people that, that music was so good. It’s very influential with bands, so I like to think we are in embracing those influences from the ’90s.

How is your personality reflected in your music?

Sarah: I am actually pretty quiet, and introspective, so a lot of the songs are fairly introspective. I just write about things that happened to me, like sorting out things that have happened in my life. They are very personal songs. I am kind of the quiet one in the band, which is funny that I’m the front woman. I hate being in front of people.

Jesse, how do you handle live mistakes?

Jesse: We practice a lot, so we don’t make a ton of mistakes. But we embrace them as part of the life experience. It’s not going to be 100% perfect. We are trying to go for a good energy, and trying to create the right mood. The songs are really personal to Sarah, and they are really slices of her life, and she cares a lot about them, so we work hard to try to set the right tone musically that works with the subject matter.

Sarah, judging from your songs, you must have had a very interesting life.

Sarah:  You could say that.

Sarah, tell me about someone you envy.

Sarah:  Jessica Lea Mayfield, and we’ve been listening to Bryan Adams, we’ve been on a kick with that.

Jesse: We listen to a little bit of everything. We listen to country stuff, to punk rock, to everything in between. It just depends on the mood. I think our music kind of reflects that too. We kind of take influences from all over the place.

How did you all get together?

Sarah:  The previous lineup of the band fell apart. I really wanted to record the songs that I had. I knew Mike our guitar player from high school, and I knew that he was doing some recording. I started recording with him. It was just the two of us, and I had him do all the guitar playing. Then I was singing in a metal band, the drummer from that, Mark, started playing on this recording project. Then we decided to find a bass player and start playing live. So we put an ad on craigslist and found Jessie. Then I had known Dave from other bands, and we had him in on second lead guitar. And I think it sounds really cool, and just the harmonies too.

When is the last time that you did something for the first time?

Jesse:  Wow! We are working on getting some band t-shirts. It will be the first time I’ve ever been in a band that had their own t-shirts, so that’s pretty exciting.

What dreams have you been sitting on?

Sarah:  I think I’m kind of living it. Honestly I always just wanted to play in a band, and have albums released. We released our first EP in July of last year, and we just got copies of our new album. I have written the next one, so it’s kind a like a dream come true for me.

Is there anything else that you guys want to promote?

Jesse: Well we’ve got that show on 7 April, in the Parkside in New York City, and we’ve got 29 April, we will be in Somerville Massachusetts. Those are two big shows coming up.

Jesse: We are so thankful to be able to talk to you. To have you represent our music to a wider audience. We are really excited about the opportunity, so thank you.