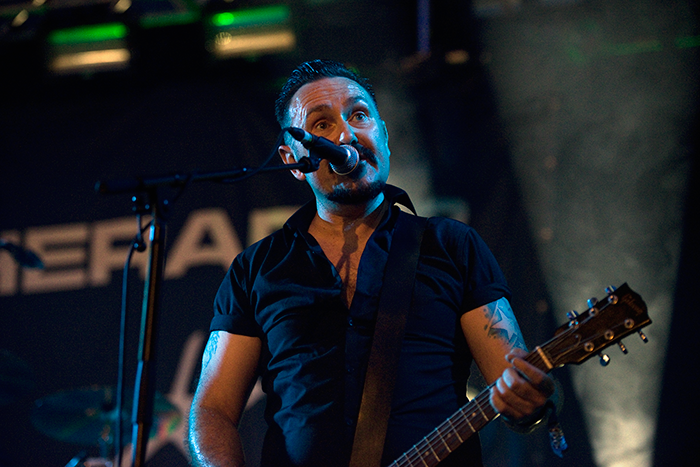 Ahead of two final dates in Gloucester and Bristol this weekend (Friday and Saturday respectively) on their UK tour, Therapy?’s frontman Andy Cairns talks about the response to latest album Disquiet, growing up (sort of), working with long-time buddy Ricky Warwick (from The Almighty and Black Star Riders) and being a proud Chelsea fan!

Louder Than War: The press and fans have given the band’s latest album a big thumbs up, something which Andy is immensely pleased about – and it’s not just old timers turning up to the live shows…

Andy Cairns: It’s been brilliant. We’ve had a really, really good time. The UK part of it was fantastic as always. What made it great for us was the new stuff going down so well with the punters. Honestly we hadn’t seen that in years. Normally when we release an album, because we change with every record, the punters kind of tolerate the new stuff and then like the old stuff. Then a couple of years later they might come along and go, “That album you did, I want to say I wasn’t sure at first but now it’s my favourite album!” For some reason with “Disquiet” people just got it straight away and they were singing the lyrics back to us from the second or third song in. It was brilliant.

We went to Germany, Holland and Belgium as well, which was sensational. We get really big crowds over there so that was great. It was a fantastic time and all of us enjoyed it.

The front barrier now is young ‘uns mostly. When we get a show every night the sight at the barrier that greets us tends to be younger people. The people my age tend to be about half way to the back of the hall or right at the back of the hall! (laughs) Or if there’s a balcony they are up on the balcony! We are seeing younger people a lot more in the last year or so, but especially on this tour.

Years ago there was no such thing as “classic rock”. There was just “rock”. Everyone thought that with all the people that were into punk music and heavy metal, when these people get to 30-years-old they’ll start listening to old people’s music. And they don’t! There is now, thankfully, somewhere for people in their forties to listen to rock music. My friends that are in their forties don’t just listen to Led Zeppelin and Deep Purple. They listen to everything! I think the stigma has now gone, that just because you’re not 21 or between say 15 and 23-years-old, you can’t listen to Black Veil Brides through to the Relapse bands to The Wildhearts and Therapy? You can listen to it all. You don’t have to be a Jeremy Clarkson about it and just listen to Deep Purple! (laughs)

Musically “Disquiet” showed a return to songs built on catchy, infectious riffs and melodies with big choruses. The dark lyrics are also still there with Andy explaining in some ways he still has a similar outlook to the his angst-ridden younger self…

There’s an angry middle-aged man in there somewhere! (laughs) He hasn’t really changed that much since his late teens or early 20s. The way I look at it is like this. I have this conversation so often with my peers. Maybe people that are my age that are friends of friends that aren’t in the music business or don’t even like music. Maybe they play golf for an outlet. They say things like “look at you, in your forties. You’re nearly 50 and you still listen to and make this? Is it not young people’s music? You always sound so angry and now you’re middle-aged isn’t that hard?” The way I see it is like when you go out on a Saturday night and you see a bunch of grey-haired blokes beating the shit out of each other in a chip shop. They’re angry, though they wouldn’t admit it. They’ll pretend everything’s fine all week then spend £10 on ale and beat the shit out of each other. Or if you see that guy with road rage. That guy who’s about 55 giving you the wanker sign because he thinks you’ve cut him up. He’s angry. He’s not giving you the wanker sign because of how you’re driving. There’s something badly lacking in his life that means he has do that as road rage. People beating up their partners. Domestic violence that goes on all the time. People that drink to excess every single night. These people are all angry. Society makes you believe that when you get to 30 it should all be behind and everything’s a nice, cosy run. Life doesn’t work like that for anybody.

Despite the continuing darkness expressed in his work Andy, who lives in Cambridgeshire with his wife and son, says becoming a parent really made him take stock of the important things in life…

Becoming a dad made me realise that I didn’t want my son to grow up angry at the world over inconsequential things. If he’s going to be angry it should be righteous anger. It made me realise I’m looking after someone else. I can’t be selfish all my life. That was really the most positive thing that ever happened to me because it’s easy when you’re in a band to be completely selfish. Another good thing, now he’s a teenager and will be sixteen this year, is now he reels me in! There’s certain things because sometimes I think I’m being an expert at everything. He’s living a teenager’s life and gaining experience. I’m an old fucker now! (laughs) It makes you want to listen to younger people instead of being pompous believing that you know best. He’s not into what I do. He’s into hip hop! I think that’s important, to rebel against your parents. If he was inclined to be in a rock band then fine and I’d give him all the encouragement he needs. But now he’s more interested in other things and that’s great.

I’ve known Ricky for so long! We used to live together in Dublin in the 1990s. We always had different ideas about what we would like to do and stuff. We never got round to doing any of it! It was the classic thing where you sit around in the pub with all these great ideas. Then he’d be off doing stuff with The Almighty or with (his later band) [sic] and I’d be off with Therapy? He’s very, very easy to work with. It’s funny that it’s so easy since the advent of the recording device on your mobile phone. He called me up one day and said, “Hey! Do you fancy writing a song together?” I had an idea for this song “Celebrating Sinking”. I recorded it on my phone in the kitchen! (laughs) I said, “I’ve got this chorus but it needs a verse. Here’s the lyrics to the chorus and the melody.” He listened to it and said, “Right, I’ve got a few ideas!” Then he sent me back a phone message of him singing the verse with lyrics and then my chorus. It was really cool. That’s the way it was worked out. It was lovely to be asked and involved on it because Ricky’s one of my dearest and most long-time friends.

As Andy approaches his half-century (22nd September) he is hopeful of making it a big celebration for fans as well as family, but says he has already had the best possible present…

We have some shows coming up around then so it depends. If we can fit an Andy Cairns birthday-themed gig that’ll be fantastic. It depends but I’m definitely up for doing something like that. I think my birthday came early for me being a Chelsea fan, winning the Premier League title! (laughs) I was there!

It was a big match on the small screen that began Andy’s love affair with the West London boys in blue, as he explains…

It was the first game I saw on the TV when I was a kid. I remember I was about five years of age and Chelsea played Leeds in the FA Cup Final. My dad got a lot of his friends from work round and they got the beers in! I just remember all these strange men with cans of beer in the house. I was only five and my mum told me there was a big game of football on. I tried to watch and I was trying to be really cool! (laughs) In Northern Ireland you don’t really follow the local teams until you get a bit older. When you’re about five, six or seven and everyone’s asking what football team you support you tend to support one from England. So then Chelsea was my club because it was the first one I’d seen on television and I remembered that. I wore blue! (laughs) Then I got to being a teenager and we all kept an eye on the (English) First Division growing up. My Irish team would have been Glentoran (Ricky Warwick’s team). But Chelsea was the more famous one you’d bought the kit of! (laughs).

The Cairns jukebox is mostly focussed on loudness at the moment, though Andy does have his mellower side too…

There’s a few punk bands I really like at the minute. One called White Wards who are really great and another one called Gas Chamber. They play progressive hardcore. The second Boston Strangler album, I really like that. There’s also, if I’m feeling a bit more chilled out, a girl called Nadine Shah from the North East. She’s just done her second album which is absolutely fantastic. It’s really good for chilling to. There’s a Spanish punk band called Barcelona. I like the new album.

Check out the new video for “Still Hurts” here…

The album “Disquiet” is out now via amazingrecordco.com.

The band wrap up their current UK tour this weekend with festival dates in Europe to follow, as well as more gig announcements soon.

The band is online at the official website therapyquestionmark.co.uk.

All words by Nick Holmes with the photo above © Tess Donohoe. More writing by Nick on Louder Than War can be found at his author’s archive. Nick tweets as @oldenick666 and Tess as @tess_donohoe.