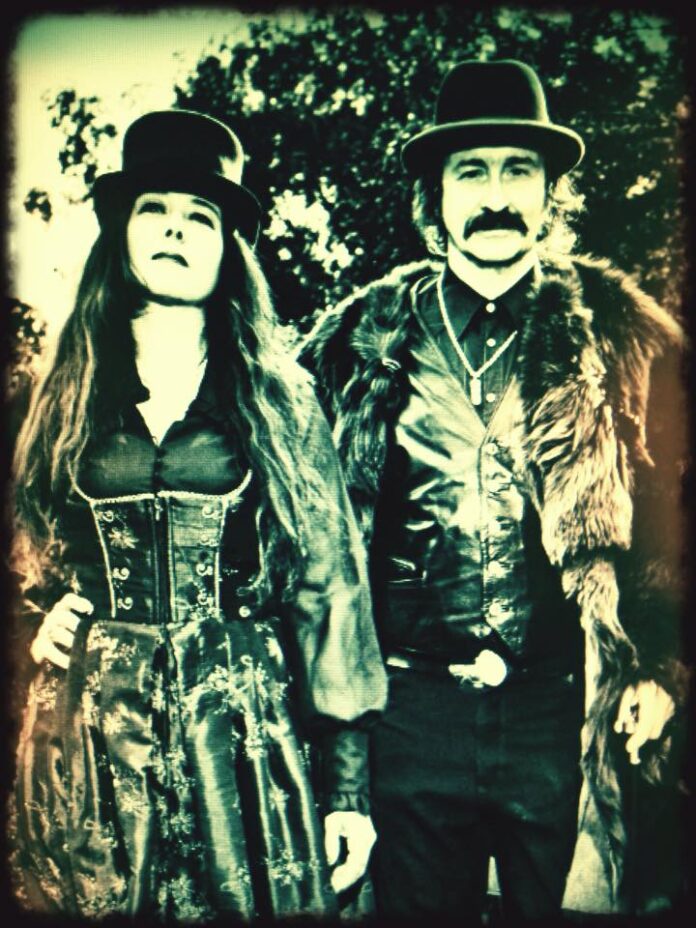 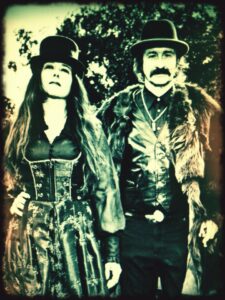 International multi media story tellers, avant noise artists and supersmart conceptualists with a dash of the dark stuff in their souls, Danielle de Picciotto and Alexander Hacke have a combined CV that reads like break down of the cool stuff.

Whilst Alex was busying himself as one of the founder members the great Einsturzende Neubauten, Danielle -originally from Forest Hills in New York City where the Ramones had originated from a few years before – was navigating towards Berlin where she arrived in the late eighties and co founded the huge dance event, the Love Parade, before performing with bands from the Space Cowboys to Die Haut to Crime and City Solution whilst making films, documentaries and art in a list of great creative stuff that we just can’t list here.

With art and ideas oozing out of their pores it seemed to be gloriously fated that the pair would wind up together as a physical and creative relationship and they married in 2006 and have become a Bonnie and Clyde of left field art- writing, and performing these brilliant musical concept pieces like Ship Of Fools or Ministry of Wolves with which they toured internationally whilst inviting musicians from different countries to participate and create cultural interaction.
Based on the writings of the Brothers Grimm, in particular Anne Sexton’s ‘Transformations’ (1971), the Pulitzer Prize winning poet’s reworking of the Grimm’s fairy tales, the album has been created as a soundtrack to ‘Republik der Wölfe’ a theatre production directed by Claudia Bauer.

I first bumped into them at some kind of left feld conference affair in Istanbul in 2009 and they were both great company – funny, smart and so alive with ideas and the madness of great art. There is never a dull moment as their conversation zigzags from art, music, spirituality and gonzoid punk rock- sometimes in the same sentance- they are both smart hip, dangerous, inspiring and funny as fuck. they currently don’t live anywhere and lead a nomadic lifestyle returning now and then to Berlin to sleep other office floor and plan their next long term art trip as they explore the road and the journey like digital beatniks.

Working outside their already outsider creative day jobs they have worked through several collaborations including last years Misery Of Wolves with Mick Harvey and in 2015 will tour together with Jarboe and Helen Money performing a new work that they are recording at the moment and will release as an album before the tour where they will thrive on collaboration and the endless road whilst creating a musical and visual world to get lost in.

(The February tour dates are below the interview)

How does the creative dynamic work between the two of you? is there an instigator and a collaborator?

Danielle: The reason why I like collaborating with Alexander is that on one hand we share many same tastes (odd sounds, strange instruments, burlesque shows, low brow art, literature) but on the other hand we are very different characters. I love working with words, classical harmonies, surreal sounds and themes, Alexander enjoys learning new media and technical programs , puts emphasis on rhythms, prefers turning up the volume and likes to jam. I like lucid dreaming, he likes metal. So when we do something together the outcome is usually pretty unforeseeable for both of us and that is something we both enjoy!

Alexander: It is interesting to combine our different approaches. Even though we tend to “like” the same things we seem to see the details of any given subject from opposite angles. This way we do literally broaden our respective horizons by working together and eventually come up with a result which truly is our collective vision.

Danielle: Our collaborations are always multi media performances. The emphasis is obviously on the music but the visual aspect and projections are always very important to us as well.

Alexander: Well, on the tour with The Ministry Of Wolves we played music originally conceived for a theatre-play.
What we’ll do here is written for and as a performance involving two musicians. Again we are not going to “act”, portrait characters or change costumes, that’s what actors do. Hopefully we will achieve dramatic effect though and manage to create a narrative within the show without having to spell it out.

It’s a great line up for the tour with Jarboe and Helen Mooney also performing on the bill – how did this come about?

Danielle: I interviewed Jarboe for my current film documentary I did on the new york sound artist Lary 7 (out now on neubauten.org “Not Junk Yet- The Art of Lary 7) and we are in regular contact.
Alexander and I have been doing quite a few double bills in the last five years and have enjoyed inviting a lot of guest musicians to our shows. To be on tour with friends is always fun and so when Jarboe asked us if we felt like double billing with her it felt right.

Alexander: I’ve known Jarboe for decades, but we never actually collaborated on anything. I like the mystical approach in her lyrics and aside for a fondness of heavy guitars and drone we sort of share a history in our upbringing, if you will, because both of us spent many of our formative years in what probably is considered “seminal” groups and have utilized the experience to create something beyond the initial aim of those bands.

Are you actually 21st century nomads or do you return home occasionally to feed the cat!

Danielle: Yes we have been on the road now since 2010 -we gave up our house in Berlin and only have an office left to deal with our administrations

Alexander: I’m more of a dog-person and I am looking forward to being able to keep a big sloppy canine at one point, but wouldn’t mind having a cat as well, once we eventually settle down again.

What is the performance about ? does the spoken word tell a story or create an atmosphere?

Danielle: My main theme at the moment is how our journey has developed over the last four years. Being on the road turned into a sort of spiritual pilgramage at one point and the questions of what a home is, what meaning life has and how everything is interconnected took on a new urgency.
The search for answers infiltrates our art of course and the questions we are wrestling with, will be part of the atmosphere.

Alexander: The narrative will unfold in peoples heads. We will just provide some parameters and plant a few subliminal messages while we are at it…

You have worked with some great collaborations- do you bring the person to the projects to see what they can do or do you hear something in the project that suggests someone to work with?

Danielle: It usually depends on the project but often we like experimenting and creating clashes -putting together very different people and arts – this usually creates something unexpected and new.

There’s a great sense of the theatrical to your projects – is this a key element?

Danielle: One of the main things that Alexander and I have in common is that we have such a wide spectrum of interests .
We are both avid collectors of odd objects, kitsch, dadaistic atmospheres and lavish environments. Everything we do always seems to turn out very rich and dramatic I suppose the theatrical atmosphere is a mirror of our taste.

Alexander: Well, our aim is not really to create great sing-a-long choruses, but rather some sort of scenery, an audio-visual environment we can operate in and which gives us a platform and a backdrop to seduce the audience into our world. So I guess it has to be theatrical to the point where people let go of their common reality and are willing to lose themselves within the show.
Danielle de Picciotto & Alexander Hacke/Jarboe & Helen Money  (from London to Riga)