Resist is a powerfully political, regret filled, love and hope aspiring, awareness provoking masterpiece of sound and fury, by Agency, mostly focusing upon the United States government, and its sorry state. Their musicality is a mix of soul R&B, acoustic, electronic, house, alternative hip-hop, Indie, rock, something for everyone, and probably one of the coolest projects I have ever listened to. 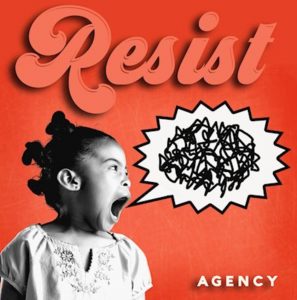 The album was conceived with the song “Desire”, that was created the day that person in office announced the ‘Muslim’ ban, when the anger felt was embraced creatively. The duo Agency just wants to create from the heart, with the freedom to do what they want.

Although out in the Caribbean, bracing for a category 4 hurricane, Agency agreed to answer some questions. They proudly explained their songs and the meanings towards them. This release is an essential for all Americans and everyone living in the world.

Louder Than War: Can you explain exactly what Agency is?

We are a multidimensional two-person act with roots in different genres and backgrounds. We set out to make expressive art without needing to adhere to any formula that is dictated by pop culture or a business plan. Having the freedom to do what we want, we just create from the heart.

Resist sounds very powerful. What are some of the stories and themed covered in resist?

The idea of the album was born with the song DESIRE which was written the day the current “president” announced the horrible “Muslim ban”.  That very day, all the anger and distrust we had for this “president” just poured out in words. It was a pointed statement against his mistreatment of humanity, his mistreatment of women, of society. His brazen disregard for democracy and his self-centered, arrogant and crass demeanor.

One of the songs, RED TO THE MOON, predates the album. It was written shortly after the shooting of Philando Castile.

Till and Marrow touches on the harrowing stories of Emmett Till and Henry Marrow, two separate examples in history of injustice and discrimination resulting in their deaths and subsequent acquittal of the men who blatantly did so.

What’s most striking to us is how a song we covered on this album like Black Boys on Mopeds written by Sinead O’Connor has lyrics (some of which we updated to apply to the USA instead of the UK) that are sadly very timeless: racial profiling.

And then come the words of Maya Angelou on SENSES OF INSECURITY, a song we created directly from her poem. We offered it as a sort of soothing song, a respite of sorts from the pain and insecurity felt in the rest of the songs. Comfort in the chaos of the world. There can be hope in one another.

Who wrote the music, and what was the motivation for taking on such a task?

We both share the joy of writing the music. The motivation was to make an album about the reality of being insecure and worried and angry in this country today… it is akin to writing a long and important chapter in a history book. We are putting facts (and some of our feelings and fears about those facts) on “paper” by way of song and sound. So many music critics (like Bob Lefsetz, for example) continue to criticize artists today for not making music with purpose or meaning and claim the music world only cares about the hit single and the “album is dead.” So we wanted to make an album that is a true concept album, that incorporates our truths and our love of various musical styles into a cohesive themed collection of stories. Making music has a three-fold purpose here: it’s cathartic (both emotionally and in the way it satisfies our love of writing and making music), it’s emphatic (making bold statements), and it’s ecstatic (in the sense it can also excite the senses).

Do you think that music can change the world, and if so which song would you pick to help change it?

I don’t think music itself can change the world but it can help to spread a message. It can inspire! But “changing the world” takes a much greater force than music. Honestly, we can’t pick one song here to propel that inspiration but if we had to, it would be DESIRE.

then gave us children to start over again

each generation gets worse than the first

This is one of the coolest releases ever. Have you done similar projects?

Why, thank you so much for saying that!

We did! The EP that we did BEFORE the election, POLITIKARAMA, tackled similar themes to some extent and traversed some sonically different territory.

Any future projects similar to this one in the works? This would seem a great soundtrack for a movie?

We had the true follow-up to our debut album (IDENTITY) already recorded and ready for release this fall before we recorded RESIST but the itch to get this written and recorded temporarily derailed that album (but it will come out in 2018). Being how insanely prolific we like to be, after the emotional journey of creating RESIST, we felt like being somewhat playful so we have an album about life and love and turmoil ready next. We don’t want our fans and future fans to think we are only about brooding and making socio-political statements and that we can have fun too! That album, PHILOSOPHIES, is coming. But, here we are taking a long-winded way of finally answering your question… in the PHILOSOPHIES sessions came out a few more socio-political themed songs which makes up yet another EP… with songs called WARRIOR and ZION that continue the exploration of what it means to be fighting for equality and truth in this day and age.

Whom does “Rumours refer to? I could ask you about every song, however I’d need to write a book.

It is about the man who sits in the office in Washington DC and calls himself the “president.” It’s about his distortion of facts and his outright lying that he twists to make people believe are truths.

telling lies to build up his evil kingdom

but once the nasty little rumour spreads

the truth is just a thing of the past

making us believe what we thought was reality

is nothing but a greater conspiracy

I won’t let this ruin my faith!

More pointedly and harsh words about him and his transgressions are detailed in the rap bridge of DESIRE which are here:

The issues that really matter

Things that could make history

to end the class distinction

End the definition of discrimination

Every woman child or man

No matter the definition

Every race religion or creed

Shouldn’t have to bleed

All have desires that are never met

The key is to feel and then act

We all have desires that are never met

It’s the things we do then regret

Gotta think twice before you take that advice

We all have desires that we shouldn’t regret

Instead you lie in bed with everyone else

Your temper tantrums are not really laughable

Cuz they’re at the expense of our security

This melting pot is gonna boil over

With the fire from the storms you’ve enraged

You’re propping up your ungodly towers

as the glaciers recede

You got me questioning my faith

My faith in humanity.

Giving me doubts about my sanity

from JFK to Marvin Gaye

but it’s difficult to keep the mood straight

keep these things in perspective

How can I have any respect for the man?