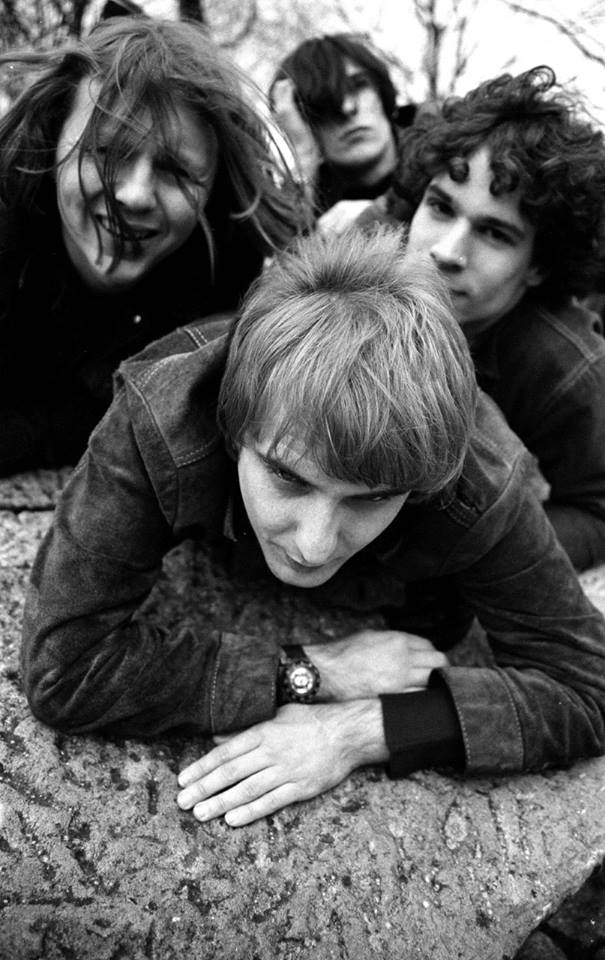 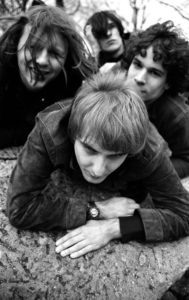 Sarah Records is not a name that’s typically synonymous to punch-ups, but Action Painting who recorded for them formed after one. And they also got involved in the one and only “Sarah Records Riot”. Despite being often dismissed at the time by the chauvinist music press and some music fans as “twee”, the British independent label that ran between 1987 and 1995 is now recognised as an influential force in British independent music, and celebrated in book: Pop Kiss, the Life and Afterlife of Sarah Records (by Michael White), on film: My Secret World, The Story of Sarah Records) and er… a Habitat art print! No, seriously.

OK, back to Action Painting, who have just reformed, with a brand new compilation Trial Cuts on Emotional Response Records, new music and some live dates. LTW’s Arash meets the band’s frontman, his showbiz mate and fellow former Brighton hell-raiser, Andy Hitchcock to find out more.  But first, a recap, or a quick history lesson, if you like.

Formed in Gosport (near Portsmouth), Action Painting recorded a demo after a punch-up between singer and guitarist. After some label interest, they agreed to do a record with Sarah as they did things quicker and simpler, “the John Lennon formula”, as Andy calls it.

They released their debut single to good reviews, especially by Saint Etienne’s Bob Stanley. The only poor review was by Sounds who folded a few days later, hence proving the worth of Andy Hitchcock’s communion with The Dark One! Hitchcock then “fucked off for a year and established a cult in Leicester”. Unfortunately some of his “more irritating disciples” followed him back down to Portsmouth. The band reconstituted with Iain Naylor on drums and recorded demos, which attracted London labels that set them up with gigs supporting the likes of the House of Love and Suede.

Hitchcock says that his band’s ethos was “not to practise too much, as a reaction to the cynical and boring levels of worn out post-Manchester professionalism in music. We despised the complacent new hippy fuck-wittery of bands like the Orb, preferring the excitement of a shitty seaside town in John Majors Britain”.

A Steve Lamaqu Radio 1 Single of the Week followed, as did a punch-up with Sarah Records darlings, The Sea Urchins, dubbed as “The Sarah Records Riot”, by label boss Clare Wadd.  The band’s final line-up included members of Huggy Bear, also guest musicians such as Andrew Blake from Biff Bang Pow! In August 1995 the band fell silent, until now.  They are now back with a compilation LP of singles, demos, unreleased tracks and a mini tour around the country.

Tell us about some of your influences

My class position, being skint and vulnerable, seeing my friends male and female being fucked over by capitalism. Other stuff is films and telly. Old stuff. I like British horror, pulp horror and science fiction, stuff like the Crabs books, Tales of the Unexpected. I still listen to a lot of jungle from the ‘90s and also stuff like Kool Keith. Musical constants have been The Blue Orchids, Scott Walker and The Claim. I’ve never gone off them….would they classed as influences? Dunno, but they set benchmarks. Of course, if you class the first bands I saw or wanted to see it has to be The Cramps and The Jesus and Mary chain

After this compilation comes out, are there any plans to make more records?

We have been offered at least another LP I think this may be contingent on touring the USA (we have been offered a tour there) We have plenty of excellent material in the pipeline, I’m pleased to say, but we will have to wait and see how people feel after the July shows. As we are dispersed we will have to use The Pastels model of getting together for short concentrated spurts. Kevin and I are used to collaborating remotely when developing stuff: it has its advantages and disadvantages. We probably won’t get on each other’s tits and won’t treat it as a routine, but on the other hand it means the pressure is on. We never over-rehearsed anyway: I don’t believe in it- although I do believe in discipline and vigour. We are not releasing this record as a tribute to ourselves: we are not going through the motions. I realised in the practises that we had when we met up again, that sadly we are still vital. The energy was there: I was delighted. Emotional Response are one of the few labels I’d consider giving the time of day to, so when they rang up and asked if I was interested I took it as a sign. I am skint but emotionally am very lucky, I have my soul-mate, I have 2 cracking weans to love and 2 wonderful socialist dogs. I haven’t even got grey hair: no mid-life crisis for me mate, just work to do.

Good! You’ve had a lot of pre-release sales for the compilation. Tell us about

Emotional Response had a pre-order release date back in March planned but somehow it got leaked. We had a special coloured vinyl run produced. Even before the website published the date, a large number of people were contacting the label and wanting to place orders. The label moved forward the pre-order date because within 24 hours everything had been sold, and they had to place orders for represses within a few hours of the pre-release date. I am relieved for the label that this happened. Bemused rather than surprised. I guess if you just disappear as a band and suddenly reappear again there will be curiosity. Its cos we’re timelords you see: we fucked off for a while to fight Daleks and shit and came back to fight the Tories! We also have two tracks on a limited edition tour LP: you can purchase an example of our new material as one of our new tracks forms part of our contribution to that LP.

Tell us more about that punch-up with the Sea Urchins!

All I remember was it was a very warm day and we’d gone up to Bristol to see the Sea Urchins play at the Fleece and Firkin. Our drummer wasn’t really a Sarah fan: he was a mod/garage type of fella, so came along but stood at the bar trying to chip away at a tennis ball-sized piece of dope to pipe up with. But the rest of us went to watch the Sea Urchins play, and they just played these awful renditions of rock classics like All Along the Watch Tower and other pish. We could’ve got that at Gosport Labour Club. We actually cared that they were letting themselves down, because they were a band who really DID know how to put magic into a song. They sounded like summer; they got the thing bands from the ‘60s had, so we thought they were acting like dicks for playing like this. We’re not the type to blow smoke up peoples arses to stay popular in a scene, so whilst the rest of the sheep were politely clapping Lee told them they were shit. They asked who said that, (guitarist) Lee put his hand up, and the next thing is they all jump of the stage and there’s a good old-fashioned testosterone-fuelled bundle, with glasses thrown, which you can hear on the recording someone made of it. On the tape you can also hear Clare Wadd (Sarah Records) saying: “oh gosh, the boys are fighting, our first riot!” – or words to that affect. Absolute nonsense, but there you go. But if the sea Urchins had released shit records, we wouldn’t have cared.

How were things between you and the rest of the band after you split up, and how did you get back together?

We didn’t split up, there were no arguments, no final decisions, we just work on a different time scale to you earthlings. We changed our name to Socialist Leisure Party in the 2000s, as Lee had been involved in an infamous situation that had left him very seriously ill. And we were living in a hostile environment where the media had done their best to claim socialism was dead, an illegitimate idea. I was a CWU union rep who had to manage strike action. Because of the disgusting way the BBC acted , telling lies about our actions, I decided to call our project Socialist Leisure Party. Also both Marx and Hardy saw collective transformation of society as a way of ensuring more leisure for the masses and that tends to be forgotten. I believe in productive leisure with work an auxiliary of this guiding principle

What’s your favourite Action Painting song and why? A new one, not released yet, called Dancing with Bible John: I’m buzzing on it. Sun Anchor is good as well, also False Flags. In terms of already released songs it has been interesting revisiting them. We dug out radio sessions of Laying the Lodger, and it shows it for the real adrenalin rush smash-and-grab anthem it is.

The new LP Trial Cuts will be released on Emotional Response  distributed through Cargo (UK) and Revolver (USA).

Check here for full info on gigs and records by Action Painting and other former Sarah artistes.