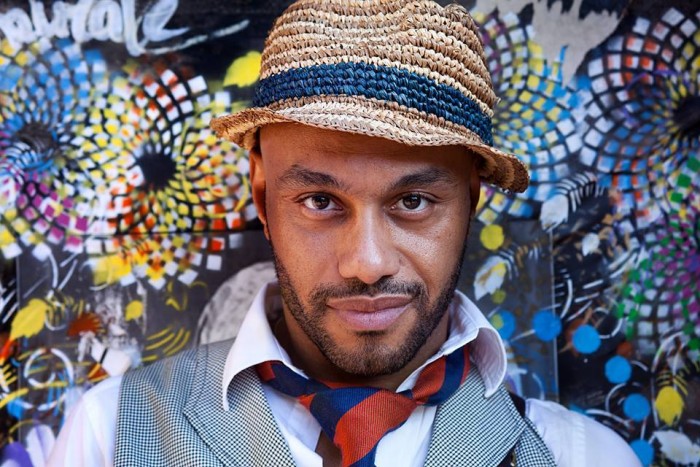 Extremely musically diverse, Aaron Paul is vivaciously impassioned by his music and his fans. His new hit single “PnP, (Party N Play), The Freak Remix, is currently wreaking havoc on the dance charts and being played on all the dance floors in the largest clubs.

Aaron will soon be releasing his newest video entitled “Goodbye” which promises to be nothing short of epic.

Although seemingly coming out of nowhere, this artist dauntlessly reinvented his entire life, left the safety of his home, and has now audaciously created more than a splash in the entertainment industry.

Aaron you are originally  from South London, and having been in a boy band constructed by Simon Cowell, we now find you in New York City creating a new and different sound, only solo. There has got to be a scenario to go with that.

Yes I came from South London, Battersea, and I had been touring with the group Worlds Apart. So I did one last tour and I said “I’m out”. We were on tour for three months, and then I went to collect my check. There was $5000 left over from my end of the tour, and then I jumped ship and came to America.

What kind of music did you play with his band?

It was a boy band so it was pop, cheesy, boy remakes of  songs like “Everlasting Love”, “Heaven Must Be Missing An Angel”, …..One of which I wrote called “Wonderful World”. I wrote in two minutes and gave it to Simon Cowell and he said “Omg this is your next big hit”.

So you were familiar with Simon Cowell?

Yes he signed me when I was 18 on Artists Records. They auditioned ten thousand boys throughout the country and when they had picked the boys they found that no one could sing. So they needed a lead singer who looked good and who could dance. That’s when I came along. Our first record had gotten to the top 10 and after that we just exploded. There was another group called Take That, and we became rivals.  So you either were a fan of Take That or a fan of Worlds Apart. I did one album and six singles with them. Every three months a member left the group and we replaced them. I was actually one of the last original members to leave.

Aaron what is your favorite type of music?

Reggae. I grew up Jamaican, my father is Jamaican.

Do you do any reggae?

I do on my album “Raw”. It’s called “Rub a Dub Style”. It was like my ode to my culture. So I’m part British and part Jamaican. My mother is white and my father is black Jamaican.

So what are you up to now musically?

We will be coming out with the “Goodbye” remix. It was originally a ballad but we sped it up and now it’s a dance mix. I just got the video yesterday and it is awesome. When people see it they are going to be amazed. I just got the finished final cut yesterday and oh my God! When people see this “Goodbye” video, people will be blown away. Even I was yesterday when I saw it! I got tingles, I got excited, WoW! People like “I Don’t Care”, because it’s got a message, they like “PnP”, because they like the visuals, but wait until they see “Goodbye”. I believe it’s my best work ever! It’s like the moment I waited for my whole life, to be me.

Give me your take on the record industry and how you have seen it change since you began your career.

I like it. I like it because I am in control. I’m a beast anyway and a control freak, but I like the fact that I can gauge what I’m going to do, and I can interact with my people. I like that. Obviously I miss the financial backing of a major machine. That was always nice, they got you on the radio, but I like being in control of my machine, my boat. People don’t know this but I have an album out, my first solo album. It’s called “Raw”. We released that last year. “Goodbye” is on there, “PnP” is on there and “I Don’t Care”, they are all on the album. When it first came out I didn’t have the platform that I have now. So people can go to the album and hear the diversity that I bring. There is a reggae track, a Latin track, there is dance, pop, R&B, and there is a sexy song called “X Marks The Spot”. That is a sexy ass song! It’s more of an R&B kind of tempo, but it’s sexy as hell.

Just meeting the fans makes this all worth it. I mean I love performing, but all the other crap you have to deal with industry wise….you do it, you play the game, but when I get home and think “wow I touched somebody”, or when somebody reaches out to me and thanks me, that’s the best part of it for me.

How honest are you?

Failure. But I never fail. I work extremely hard. I will fail sometimes and I have, but I pick myself up and get back to it. But I’m pleased to say that I’m doing what I like to do.

Do you plan to go back to England?

My father is still there and my friends, so I go back at least twice a year. I still consider England my home, but not my home, if you know what I mean. I love New York, but my heart is England.

More from Aaron Paul can be found on his personal website and he tweets at @APaulmusic.

All words by Eileen Shapiro. More from Eileen can be found at her Louder Than War Author’s Archive.