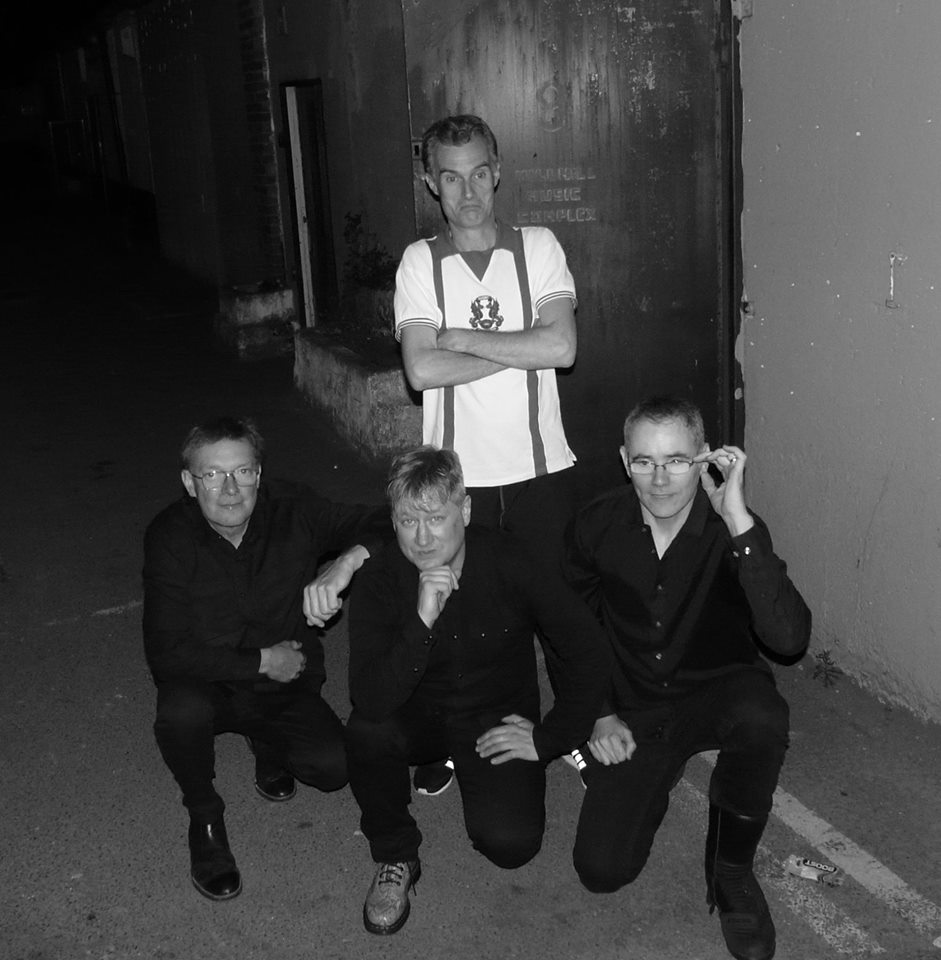 Omega Tribe were like a breath of fresh air as the early 80s UK Punk resurgence crumbled. Beginning with their “Angry Songs” EP they seemed a step up from the typical buzzsaw sound of most of the bands that were grimly hanging on in there, drawing on a much wider range of influences. They burned much brighter than the rest, very political of course but with a very human heart too. The “No Love Lost” album was important to me, full of great songs – I felt I could tell that there were sharp minds at work here, drawing emotions, feelings and thoughts that I could identify with and I wasn’t even what you would call an Anarcho Punk at all then.

That I never got to see them at the time has always been a regret of mine, but it looks like all things being equal I might well get the chance. Yes Omega Tribe are back with some gigs lined up and new material in the pipeline…..Hugh Vivian of OT kindly agreed to answer some questions so above is the mugshot (of the band recently), below is the upshot!

LTW: How and when did Omega Tribe form? Were you in any other bands prior to that? What were your aims as a band, what did you want to achieve? How did your involvement in Anarcho come about? What we the best bands you played alongside in the early days?

Hugh: We formed in Barnet, we were all (original 3) at school together and had been in bands separately. Daryl (bass) and Pete (drums) were big Crass fans and had been all over following them and Poison Girls. I remember one night we shared the same rehearsal space at a local youth club. They were just drums and bass so they had borrowed our guitarist and they had this one instrumental piece they played a few times. I can still remember it! They’d played together in a band called Comatose, and I’d been in other things, one with another Barnet boy Kev Webb, who went on to play in Conflict but back then he was more of a rocker and I thought he was really cool cos he had a leather jacket and a bullet belt. I was in a band that did some good stuff bit we only played a free festival and not on the main stage!

I can’t remember the actual circumstances of getting together. I remember going to see the Poison Girls with them in 1980…I was sold from then on really…

I was up for playing and recording, it was good meeting the Poisons, especially Lance, who we helped with the Impossible Dream printing and stuff, and Pete Fender of course.

Lance d Boyle was an incredible guy, I really loved him, I think everyone who knew him did, and Vi Subversa, they were wonderful people to have in my young impressionable life, great role models. Pete Fender had the knowledge and the gear and we got some stuff recorded.

Best bands we played with back then, definitely the Poison Girls – we gatecrashed their tour of Holland which they tolerated very kindly. Personally I was a fan of the Astronauts, but I don’t know if they count as Anarcho? I liked the Mob, but I loved a whole load of bands that I was happy to play with, Youth in Asia were great, Kay’s amazing voice and an inventive interesting band.

LTW: What did you think of what has become to be known as the “UK82” scene, basically the other Punk bands of the time that weren’t aligned to Crass?

Hugh: Not sure that I thought very much about it. Pete’s younger brother was in to a lot of those bands so I heard a bit, nothing really comes to mind…’We’re the Exploited Barmey Army…’ was that it? I’m sure there was a lot of good stuff. We went to see Killing Joke, does that count? You’d have to tell me which bands that was for a better opinion!

I think we played with Peter and the Test Tube Babies once, or maybe just at the same place, memory fails me sorry!

LTW: How do you feel Omega Tribe differed from the more standard Anarcho Punk bands on the scene at the time? On the recordings now I can hear 60s, Folk and even Prog influences, were you fans of that kind of music?

Hugh: I love all music – did then, do now – pop, soul, reggae, folk, jazz, whatever, so long as it moves me and speaks to me. So yes I think is the answer. I don’t think Daryl or Pete were though. They were into music but definitely not prog or folk! Pete Fender had a more diverse playlist too.

LTW: Do you think Anarcho as a scene it suffered because of the basic musical palette and were you as a band trying to get away from the military drums/buzzing guitars and shouted vocals that had tended to dominate?

Hugh: I don’t think we were consciously trying to get away from anything, that was just what we did. We all loved records like ‘Promenade Immortelle’ by the Poisons and liked arrangements that were a bit different, harmonies etc. I think that the scene was actually quite diverse then. ‘Punk’ as a musical genre seems more narrow now, it seems to have gone over the Atlantic and come back as thrash metal, Discharge were a bit unique in 1980, whereas you see a lot of bands with a similar sound now, and certainly nothing like what was labelled ‘punk’ in 1977.

LTW: Were you invited to do the “Angry Songs” EP for the Crass label because of the “Bullshit Detector 2 track “Nature Wonder”? Was it a shock to be asked to do the EP? What was your experience of working with Crass? Did you have any other offers from the “Punk” labels of the time?

Hugh: No, none! Daryl worked hard at developing a relationship with them. I can’t actually remember being asked, I think it was us doing the asking!What do I remember about recording with Penny? He had good ideas, Pete Fender was there too so the piano and harmonies were a joint effort. Drum sound a compromise, megaphone vocals Penny’s idea. So he was creative and could hear what was right. Vocals always too low in the mix though.

LTW: You made a major step forward with the brilliant “No Love Lost” LP – because the band were dab hands at catchy songs, did you meet any resistance from the more “Hardcore” Punk bands of the time?

Hugh: Thank you, it was a good process, only a few days recording. I did hear people calling us hippies, fair enough, each to their own! I’m into songs, melodies, choruses and all that.

LTW: I’ve a very vague memory of the band being interviewing in “Sounds” …. I think at the time you were working with a member of the pop band Hot Chocolate as producer…. if I imagined all this please feel free to ignore! But if it did actually happen, how did that come about? Were you pleased with the results? Was there a culture clash?

Hugh: He was a session musician called Paul Ellis, he’d played on a Crass record (the big keyboard bits on ‘Christ the Album’) as well as touring with Hot Chocolate, no real culture clash really, it wasn’t like we were working with Errol! I loved Hot Chocolate as a kid.

The record was a disappointment, it was overproduced and gimmicky in my view, a mistake with hindsight!

LTW: Why did the band split soon after the “It’s A Hard Life” single? What did you all do next? How do you look back on 80s Punk and Omega Tribe’s recordings now?

Hugh: I think we’d been so closely engaged for those three years or so that we needed a break. We played a lot of gigs in that time, all over the place, up and down the country in a van living on chips! I didn’t have a strong musical direction so drifted about musically and got into the world of work with an idea about contributing to society for the common good or some such nonsense. Since the 90s and a bit of growing up I’ve written a lot, poems and songs, played a few select gigs (mates’ parties). I’m well into it now, loving writing new songs.

Looking back, we were lazy, we should have done more and worked harder at the writing, but that’s my older self talking…we did what we could, No Love Lost was a good thing. 80s punk gave us the platform to do our thing, got to be good.

LTW: Finally, although I’m extremely glad you have decided to come back, what prompted you to want to play as Omega Tribe again after all this time? What are your plans for the reformed band? Are you writing new material?

Hugh: We are looking forward to recording our new stuff. I’m hoping we will get to the point where we aren’t a nostalgia thing but people are interested in our ideas again. We’ll see!

I’m really moved that people still remember it and it’s been lovely reconnecting with people, some of their responses are really touching. I want to look forward and bring all the people we’ve lost with us into a wonderful future….sorry that’s a bit corny! 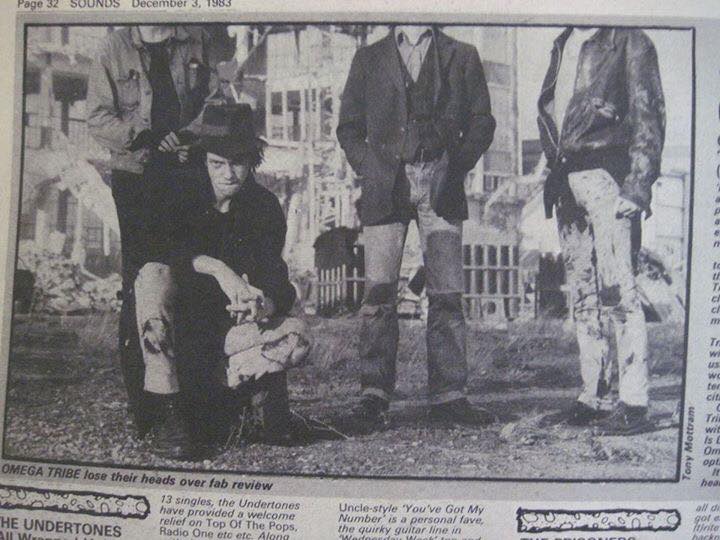 Omega Tribe are playing “Another Winter Of Discontent” on Sunday 19th February 2017 at The Boston Arms, Stereo Glasgow on 18th March 2017 and  Brighton Green Door Store on 24th March 2017.  Find out more on their Facebook page here