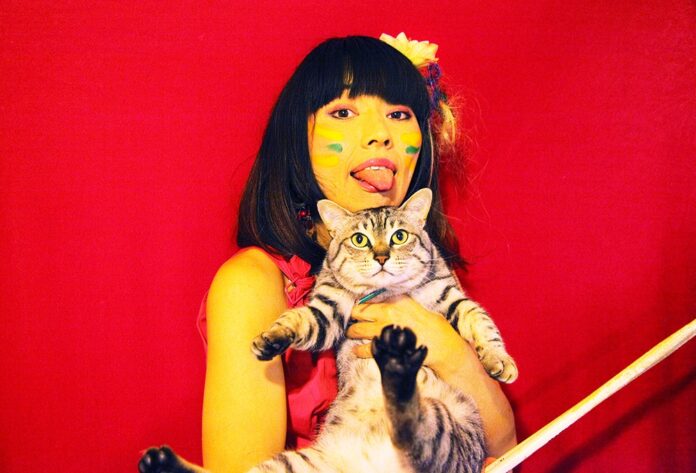 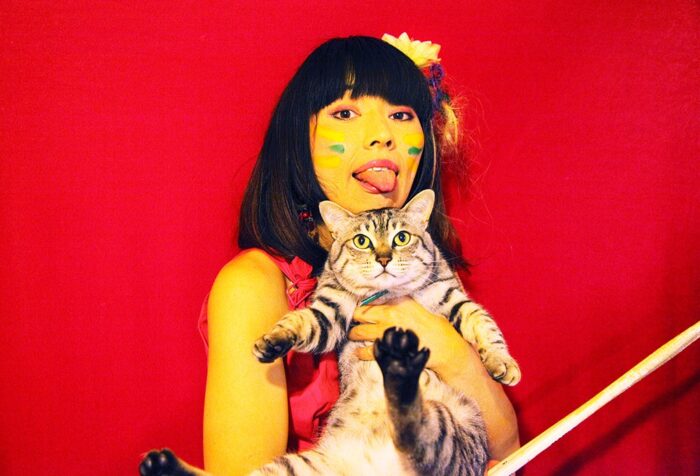 Pika☆ is a an iconic drummer, guitarist and singer from Osaka Japan who mainly works in the field of experimental hard-rock / psychedelic rock and improvised music. You might know her through her current occupation as drummer in Acid Mothers Temple, although she is best known for playing in the explosive duo Afrirampo, a band described by Barry Hogan (ATP) as “one of the two greatest live shows ever to appear at ATP”. Here, Damnably’s George Gargan talks to Pika☆ ahead of both Friday’s Acid Mothers Temple London show and her debut solo UK tour on which she plays with Stuart Braithwaite of Mogwai & Thurston Moore of Sonic Youth.

Louder Than War: So, Pika☆, ‘Afrirampo’ recorded a number of critically acclaimed albums, toured with Sonic Youth & Lightning Bolt, played ATP (maybe 3 times?) then went on hiatus. Did you and Oni both write the songs in that band and will you play together again?

Pika☆: Yes. We wrote the songs both in AFRIRAMPO. We want to play together but … we don’t know the future yet … hahaha!

Your new solo album ‘Ryu No Sumika’ is a departure from Afrirampo, it’s intensely personal, full of vivid self reflection and crafted with much wider palette of instruments. How did you go about writing and arranging this album bearing in mind it appears to have guitar, drums, bass, brass & string sections, steel drums and even a sitar on it?

ALL my  intuition. Just feeling … and with  a little story. I wanted to release my visions. Just  think about the dragon. I just believe the songs, happening, timing  and feeling. so I asked to my great musician friends for help.

You just toured in Taiwan, where you have family and I think your Mother is from. How was that?

YES my family are in TAIWAN still. This time I met many native Taiwanese people and we sang songs and danced together. the singing was so beautiful….!!!

Also I have the same blood with them via my grandmother’s ancestors line. I think They have so strong connection with supplication. It is a LIFE. I LOVE their songs!

You tour almost constantly and also teach drums, do you like life on the road?

YES, I want to share my knowledge, also I want to know more…!!! I think the world needs people to give music back more … and me too!

After you played ’10 years ATP’ with Afrirampo you went to New York with Yoko Ono and played in her band, then traveled the world. Where did you go and what did you learn on that trip alone?

Mmm so many many places! … but I like Japan best … ! … mmm! Some time alone is good but some times it gets boring…! haha!

You are drumming for Acid Mother Temple and you’ve played with Makoto the gifted AMT guitarist many times. What do you like about his guitar style and how does this band feel compared to Afrirampo?

I really respect to him (MAKOTO) and AMT…! I’m so I’m happy to play with them. And I can feel when I listen and play together it’s like I’m in 4 dimensions. Hahaha!

There is a big natural improvised scene in Japan, but in the UK it’s a bit more of a pretentious hipster scene. What do you enjoy about improvised music and working with someone like Thurston Moore?

It makes the most beautiful sound … it’s about birth but also death. 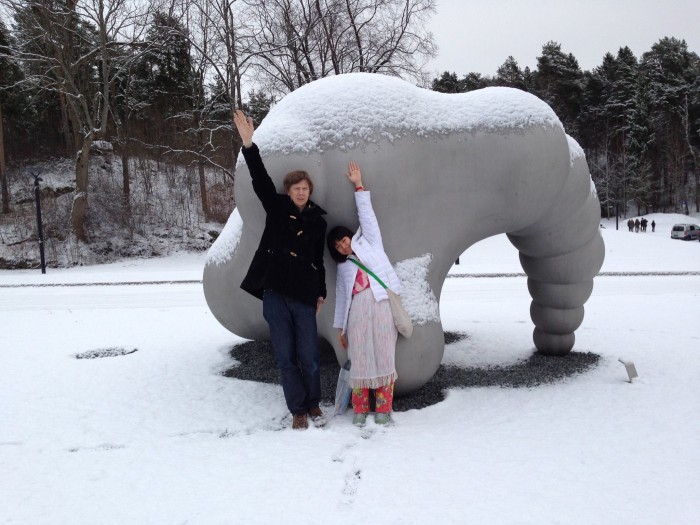 Can you explain how the difference between the music scene in Osaka and that of Tokyo for please – it seems more rock music comes from here?

Which bands and Venues do you like in Japan at the moment? I’ve heard that the Live Houses or music venues can be very expensive to hire and that people are not allowed to dance, but smoking is ok.

Japan venues smoking OK, but about dancing, it was very big problem but many artists and club people and lawyers who love the music … many different kind of people who love the music managed to change the law recently! We needed license for dancing before… it was crazy..!!!

I love the NAMBA BEARS and CANADIAN as well as MIRAI OUKURA and EIKO ISHIBASHI BAND.

You are friends and have played with  Yuka Honda (Cibo Matto), Yoko Ono, and Yuko Araki (Cornelius, The Plastic Ono Band, mi-gu), and these are all super-creative left-field Japanese women who approach their art in unique ways. Did Yuka, Yoko and Yuko inspire you when you were young? What did you listen to that made you want to form a band and play drums?

I listened CIBOMATTO when I was a high school student but mmmm … nothing made me want to form a band.

Yuki Araki is a very clinical and precise drummer while Emi Morimoto (Shonen Knife) who is also your friend, has more fun and jumps on the kit as you do. Who are your favourite drummers?

Where can people buy your new album?

You can buy at the venues on my tour. I want to sale at Rough Trade Records too!

Lastly, you became very active in the Anti-Nuclear Power movement in Japan following the Fukushima accident.

Wow!! So complex, I think we don’t need Nuclear power anymore…!!! But also it is hard to change the energy style quickly.

So slowly slowly we can change the style. Nuclear is not natural, we don’t need Nuclear Power Plant – we to need love the power plant!!!!