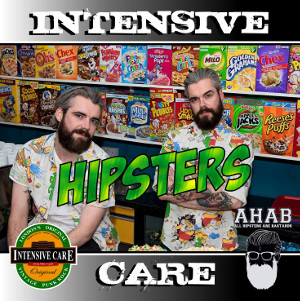 Louder Than War’s Nathan Brown listens to the song that Facebook tried to ban from the bastard sons of The Business and Class War.

I have a feeling this is one of those releases which will divide opinion among Louder Than War readers – and writers – neatly down the middle.  You will be on one side or the other.  It’s not about the music – more of that later – it’s the subject matter.  Are Hipsters a benign sub-culture adding a bit of colour to city streets or are they the vanguard of gentrification like the yuppies that came before them 25 years ago? In the last 10 years or so parts of East London have become unrecognisable from what gave them real character (and Brixton’s going that way).  What used to be edgy areas that were still affordable have become home to the rich and the culture of the areas has been commodified and priced out of reach of ordinary people or crushed under foot.  Intensive Care have seen their beloved London change for the worse and they ain’t happy.  I’ve also seen it in my travels elsewhere. The Lower East Side in New York has lost much of its soul and some of the best places to eat and drink thanks to the hipster scourge.  Where once you could buy a cheap burrito in San Francisco’s Mission district you can now buy a $2000 artisan saddle for your bicycle.  For Fuck’s sake!  When a Class War demo resulted in the Cereal Killer breakfast cereal cafe getting trashed the band rushed out a video version of their song Hipsters only to get booted off Facebook for inciting violence! (They are back on it now)  Reading the lyrics I can’t see any incitement but I certainly see great insight.

If the Cockney Rejects, The Business and their ilk – what used to be called Oi! but is now known as streetpunk –  with a bit of Class War politics thrown in is your bag, then Intensive Care will be up your street.  Whether intentional or not, Intensive Care definitely have a hint of The Business in their sound and the cheek of the Rejects in their lyrics.  They poke fun while making serious points and then disappear to the bar to get shitfaced.

Opening up the EP, “Zero Hours” is about the way that people are getting shiftworked and shafted by the casualisation of labour. Singing “We are the nightshift boys, ain’t got no fucking choice” they are talking experience not theory but they can still add a bit of humour to a shit situation: “I’m living off chips and pitta, watching my life go down the shitter”.

The title track employs a cheesy organ on a bouncy cod-ska singalong tune reminiscent of the Business song “Drinkin’ and Driving” but fuck the music, this song is all about the message.  If you are in any doubt about what hipsters are, Intensive Care are here to put the matterto rest: “Hipsters, well what a surprise! They’re just fuckin yuppies in disguise”.  There’s some comedy gold in the rhyming couplets, for example “Cruising down the pavement on your fixie bike Mummy named you Tristan but you call yourself Spike”.

Frustration at shit work for shit pay while rich kids flaunt their wealth could get the better of you but there is always a way to numb the pain…..get the beers in! Which is where they focus on the second half of the EP.  As Emma Goldman put it “If I can’t dance, I don’t want to be part of your revolution”.  In other words, life is too short to be po-faced and if you can’t have fun while you smash the system what’s the bleeding point?

Fill My Tankard” is a hymn to hard drinking with another singalong chorus “Fill My Tankard, Let’s get wankered” delivered over a straight up punk tune.  “500 miles” is Intensive Care’s take on the song that made the Proclaimers a household name, but with some poetic licence taken to turn it into a lovesong from a drunk.

If you like punk, hate hipsters and like a drink this one will be for you.  If you are a fan of hipsters you probably didn’t make it this far down the review.

Get your copy of the CD or the Download from Intensive Care on bandcamp  or check them out on Twitter and Facebook (unless they get banned again!)