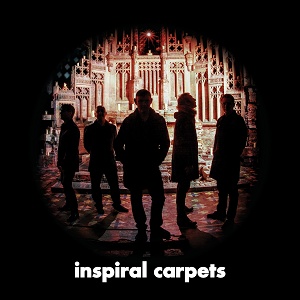 A great deal has, and will, be made about this being the first new Inspiral Carpets album since 1994, but is it any good? Well the simple answer is ‘Yes’, the longer answer is ‘You’d better bloody believe it’ as the Oldham lads done good roar through twelve new tracks like it’s their debut and their lives depended on it.

The songs sound like they’ve never been away (or have their batteries just simply been recharged), as swirling organs, thumping drums and infectious choruses fill every track and the band stamp their mark like only they can do. They sound like no one but themselves.

Opener Monochrome sets the bar high, and the bar remains there for the remainder of the album. It’s testament to the albums strength when recent single, the brilliant Spitfire, is possibly one of the weakest tracks on the album. It’s still classic Inspirals. Their brand of unforgettable, fun pop/rock seems to have not deserted them and it’s like they’ve never been away. Can it really be twenty years?

For the uninitiated, it’s like listening to a Best Of collection it’s so good. Toe-tapping, dance inducing, chorus humming songs continue to pour out at an alarming rate giving no chance for respite as the metaphorical Carpet Express steams along not stopping at any station, instead opting to show moonies at the would-be passengers on the bustling platforms.

The songs were apparently ‘recorded quickly to keep them fresh’ and there’s no doubt that they achieved it. Calling Out To You is classic Inspirals with organ riff and rising chorus, which is difficult to forget, not that you’d want to, whilst Flying Like A Bird slows the pace somewhat as they get as beautiful as they possibly can.

An appearance by Manchester brother-in-arms, the genius that is John Cooper-Clarke on Let You Down, confirms not only the band’s brilliance but also that JCC is still a force to be reckoned with.

Inspiral Carpets are back, bigger, better and louder than ever. There’s a track here called Our Time, let’s hope so.