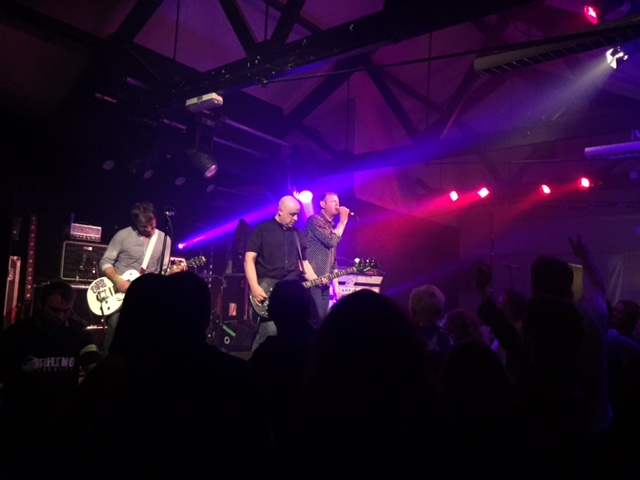 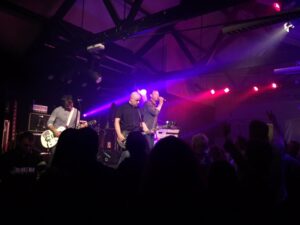 The Inspiral Carpets brought their back catalogue of indie classics and an infectious energy as they played Derby of the first time in more than twenty years. Louder Than War Editor Sarah Lay was there to report.

It starts with a beat, the chaotic patter of rain on the windshield that peters out and gives way to a muffling mist, tendrils illuminated by streetlights as they stretch around you. Collars are turned up while faces go down, feet scurry as we feel all the years that are laid upon us in the gloom of the night about us. But, hold tight and chin up, the black and white murk of midweek in nowhere town is about to explode in blinding Technicolor, flood with surging resonance.

The Inspiral Carpets, playing Derby for the first time in 24 years, are an amazing riot of sound; a skirmish of nostalgia and new, delivered with a phenomenal energy. This is a band that epitomise the thrill of playing music with your mates and with three decades clocked as a group they have a solid back catalogue, as well as the deep camaraderie, to rely on.

Tonight they are packed together on a tiny stage; the Farfisa a pulpit from behind which Clint Boon grins at the chants of ‘Boon Army Boon Army’; Graham Lambert and Stephen Holt iconic poses and knowing smiles as they tangle around Martyn Walsh, a thousand-yard stare in a forty foot venue; while Craig Gill is almost hidden from the audience’s view behind a wall of amps.

Throughout the set there is an easy-going rapour on stage that translates to a bouncing hands-aloft energy in the crowd as we are treated to a stream of hits both old and new.

Beginning with the simple act of saying a single name before the pounding beat and skittering percussion dart beneath the circling organ riff. The wild-eyed, chest heave of a chorus arrives the whole venue raises voices in solidarity ‘Because I’m Joe…’. As the psychedelic swirl of keys spirals toward a climax, anchored by the ebbing and flowing back line, live there is a crunchier guitar sound. The slam of chords is an attention-grabbing punctuation to the spill of lyrics as we all recite the cautionary tale of Joe.

As one of the big indie hits this band are so well-loved for, so clearly remembered even by the casual fan, Joe is one of the songs that span all the phases of the Inspirals tenure as a band. Written early in 1985 and recorded in ’87 for Dung 4 this is from the period when Stephen Holt formed the band with Graham Lambert, but it didn’t embed itself into the national psyche until later, when Holt had left vocal duties to be fulfilled by Tom Hingley.

And it’s with Hingley’s voice that this song, and other Carpet classics, is usually heard. Tonight though it comes full circle and Holt shows that while he might have a different vocal style – raw and earthy compared to Hingley’s more formal manner – his time away from the band did nothing to dim his connection to the songs or to bring into question his position among that frontline tonight.

It all means that just like Joe for his borrowed cigarette, my heart leaps and it does laugh, at the exhilaration of hearing something so well known made far out and fresh by this re-invigorated band.

That energy of creation comes through on the newer tracks scattered through the set tonight – for not for this band is resting on the nostalgia of tracks that filled dark indie dancefloors across the decades and made Madchester resound with mooing. Last year they delivered arguably one of the best albums of their 30 year career and certainly a gem among the slew of 2014 releases.

The highlight tonight has to be Spitfire, a grittier more determined song when played live that sweeps upwards on the flurries of keys. The symbolism of planes reoccurs regularly through the Inspirals songwriting, reflecting a band that have the ambition and the power to really fly,to soar among their contemporaries as they take us all along on this journey of possibilities.

As well-received and inherent as the new tracks sound it is those baggy bangers that work the crowd into a frenzy. This Is How It Feels manages to be resolute, refusing to be cowed by the melancholy of the subject; Two Worlds Collide brooding; Dragging Me Down a thousand little deaths and resurrections packed into a four-minute burst where again, we’re treated to a more guitar-driven version that the record.

It all climaxes, as surely we all knew it must, with Saturn 5. The repeating hee-haw of organ, the bouncing beat and those words, again those words full of possibility and hope. This song still feels like a first step on alien soil, a brave exploration, which for something which we can all sing word for word, note for note, and feel embedded in our personal history as well as our shared culture, is no small feat.

Steam rises from the crowd, fists thrown aloft strobing through the lights, as the chorus rises and we’re freed of the gravity of everyday life and the gloom of an autumn weekday by the songs of our youth played by a band who are still so very much of today.

Make sure you pick up a copy of issue 2 of Louder Than War magazine in December for an interview with the Inspirals – available in WHSmith and independent newsagents from 1 December.

All words by Sarah Lay. You can find her on Twitter or read more of her words about music on Louder Than War here.