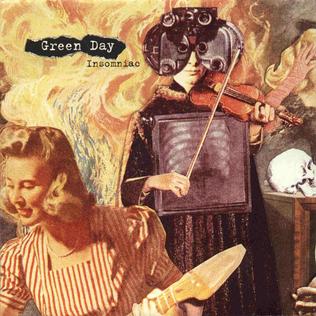 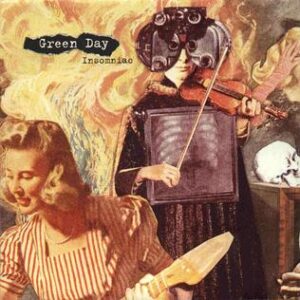 In 1995 Green Day were riding high on the success of the multi-platinum Dookie, released the previous year. Their follow-up, Insomniac, would cement them as the kings of the rising punk-pop scene, whilst simulateously alienating some of those who had fallen under Dookie’s spell. Twenty-five years on from its release, Nathan Whittle makes the case for why this bastard younger brother is Green Day’s high-water mark.

When Green Day rolled through town in support of Dookie, I was too young to make the show. But, a year later, in September 1995, they were back and, on the back of the success of the album, they were out of the clubs and playing theatres. Thus, their Manchester Apollo show on September 22nd popped my gig-going cherry (not counting the local Lanky nights through the years). It may have officially been the Insomniac tour, but the album was still a month from being released and songs from its bubblegum punk older sibling dominated the set.

The band bounded on and wailed straight into Welcome To Paradise. In the middle of a crammed mosh pit, my feet didn’t touch the ground until they decided to drop in the first dose from Insomniac, the single Stuck With Me, five songs later. That night, on the official European tour for their fourth album, Green Day only chose to play the already released singles. Stuck With Me, Geek Stink Breath, and Jaded. By the time they rolled through town again, on the Nimrod tour in 1998, only the last two would make an appearance.

A crying shame looking back because, while it was Dookie that had propelled them into the stratosphere with its great punk pop hooks and slacker-vibe lyrics, Insomniac, criticised in the some quarters of the press at the time for lack of progress, was certainly a step forward for them. The spring that had bounced throughout their previous albums had been wound tighter than tight, twisted with self-doubt and anxiety, feeling the alienation from the 924 Gilman scene that had nurtured them. Armstrong put it out there on the wonderful 86. There’s no return, their time there had gone, they were personas non gratas in the venue that had once been their home.

That anxiety brewing in Armstrong spewed out in bucket-fulls on Insomniac. “Ready for a cheap escape on the brink of self-destruction…Broken glass inside my head bleeding down these thoughts of anguish” he sings on the aptly-title Panic Song. The very opening lines on the album, on Armatage Shanks, set it out. Stranded, lost, his own worst enemy, rejected, self-loathing freak and introverted deviot. The teenage boredom of Burnout was starting to eat away from the inside. Armstrong himself admitted to his confusion looking back. He was in a band he loved, doing what he had always wanted, yet at the same time causing vitriol from the people who had been around them and supported them from the outset.

Depite putting off some fans, it was that darker twist that made hearing Insomniac all the more inviting, that and the step forward in songwriting. Critics at the time pointedly tried to compare the band to The Clash who, over four albums, had completely shifted and the changed their style. Here were Green Day, four albums in still and doing what they had been doing at the beginning. But that was the point. We knew they were. But they were doing it better and better. The shift in both sound and lyrics was akin to that of Weezer’s move from their debut to its follow-up, Pinkerton.

The sound of Insomniac, a testament to Rob Cavallo’s production, is dense and immense, thanks in a great part to that buzzsaw guitar sound. The harmonies are lush as Mike Dirnt steps up and perfects what he had been trying to do since Sweet Children, all the while walking his bass parts through the fits and starts of the melodies. And then there are the drums. The effort Tré Cool put into recording the pounding intro to Panic Song saw him wind up wasted on the floor, calluses bleeding from his hands. The band may have been going through the grinder mentally, but together, in the studio and armed with these fourteen songs, they were becoming an unstoppable force.

Their punk pop bandwagon had become a juggernaut.

The world-conquering American Idiot was still six years away. By that time, Armstrong had stopped looking inward so much and had come to terms with the band’s status. And so the band embarked on the path that would make them stadium superstars. In 1995 they were still a bunch of early twenty-somethings grappling with the idea that they might have to move on from their roots. They had the world at their feet but were trapped inside their heads. And in that moment, trying to figure it all out, they made what is probably their best work to date.

To mark the anniversary of the album, Green Day are to release a remastered LP version with a bonus disc of 8 live tracks from their 1996 Prague show. Yeah, by the time that one rolled around they were dropping a lot more of the songs in. Me, well I didn’t catch them live again after 1998, not until their 2017 Madrid show. By that time, not a single track from Insomniac made the cut.

It’s nowt to lose sleep over though, I guess.