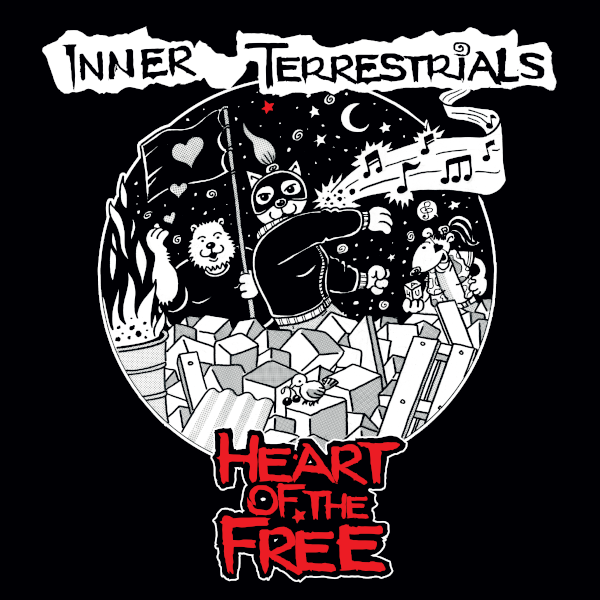 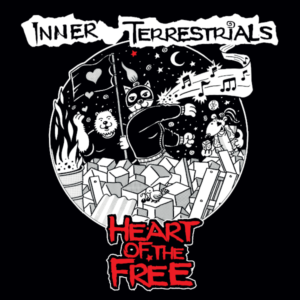 After a 9 year gap, South London dub-ska-punk rebels Inner Terrestrials offer up a new album that sits shoulder to shoulder with their existing body of work.

Inner Terrestrials have been going for more than a quarter of a century and are popular with a wide range of folks. The appeal is obvious. There’s aggro politics for anarchists, animal rights/eco activists, anti-fascists and hardcore punks. They have an affinity with travellers and the UK festival/free party scene, and their sound is beloved by a younger generation fascinated by ska-punk.

Heart Of The Free is IT’s first album since drummer Paco passed away. While it would be a tough job to replace the big man’s technical prowess, new drummer Ben Swan has proven a suitable replacement and has clearly worked hard to provide the speed and precision required by the band.

This album has got all the trademark elements that make the Inner Terrestrials sound. The juxtaposition of slow dub with speedy breaks of high octane punk or bouncy ska. Switching from singing to shouting, mixing melodic reggae upstrokes with full gain downstrokes and even a sprinkling of folk music. The heavy heavy sound of rumbling dub bass switching to the more manic requirements of a punk tune. Complex drum patterns. And not forgetting Jay’s unmistakeable vocal style.

I.T. still have fire in their bellies and anger in their hearts, and Heart of the Free demonstrates they have not lost their romantic attachment to the struggles from which they emerged.

Chain of Command starts the album off with a melodic acoustic intro, as if sitting around the campfire, before a heavy chugging song about the nature of social control kicks in . Enemy Within providers some soulful reggae sounds, switching into a heavier punky mid section with a floaty dub ending. In one song, you have a good demonstration of all that I.T. are about for the uninitiated.

In a similar vein to Enemy Within, Eco War sets out the constant battle between Them and Us – I hesitate to use subjective terms like “good” and “evil” but there is a fence and you are one side or the other. Eco War is one of the more punky songs, and presents a familiar I.T. theme about habitat destruction and the need to fight for its protection: “As has been said before, this is the eco war, unite and fight it”.

Whereas hippes said we need to drop out of the system , on the song Break Out, IT yearn for more of a jail break. Either way, they want to escape the system of laws designed to crush the poor and protect the powerful. A message that has featured in popular song since at least the time of the Diggers.  Despite the subject matter, it’s a sedate, relaxed reggae affair with shades of folk.

Binary Dust is for the most part ska meets dub with some funky bass lines and a guitar riff that almost has an AC/DC twang to it. Under The Sun is a full on dub track complete with echo effects to the max. It starts off with a guitar line I recognise from White Nightmare from the first LP.The folky pipes have an almost medieval sound.

Mercenaries is a jerky, punky affair. Based around the popular rabble rousing chant “There is no justice there is just us”. The addition of vocals from Magali of La Fraction sets off this track a treat, providing a bit of variety. Servile Masses is a light skanky number reminding us we get the oppression we deserve “We servile masses walk blindly where we’re led” “we are the fools, we are the fools”

I.T. sometimes mix the straight up political message with metaphor and a story telling style. For instance, on Irreverent they sing “Your dragon’s horde it has no real worth” to decry the hoarding of wealth. This song has a bouncy folky sound as a result of some classical guitar style twiddling, pounding drums and penny whistle.

No Pasaran! is a manic song of resistance with samples of anti-fascist demonstrators in the middle 8. The styles suits ther message and the title spells out what to expect.

Closing track We Remember Your Name is a continuation of an I.T. theme from previous records. They emulate the tradition of Irish Rebel Songs by invoking the name of fallen comrades in the struggle for animal rights and peace such as Barry Horne, Brain Haw. “Through fire and flames we remember your names, True hearts remain, we remember your name”. The closing 30 seconds up the temp, bring in feedback, crashing drums and shouted messages of defiance which reinforces the message this album seeks to put across.

Inner Terrestrials have that knack of maintaining an arc that covers their entire body of work even as the sound progresses and morphs over time. Many of the lyrical themes unfortunately still require the same scrutiny or outrage. Perhaps rather than music that on its own will provoke change this should be seen as the soundtrack to the insurrection – their message is to keep the faith and fight back.  This album will certainly go down well with their legion of fans and friends.

The album on CD and vinly is available from the band and also available from Blind Destruction Records and the other labels involved (Maloka/MassProd/Fire and Flames/PDV/Warrior Charge).