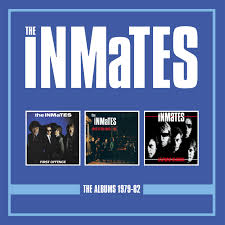 The Inmates were the archetypal pub-rock band, coming onto the scene in 1978, almost two years after the pub-rock craze started dying down. They kept the flame of this much-maligned genre going for three decades, criss-crossing Europe year in year out to bring their high energy rock’n’roll to the clubs on the continent. This set issued by Cherry Red’s Lemon label compiles their first 3 LP’s.

The band was fortunate enough to have their first two albums produced by Vic Maile, a former Pye engineer in the sixties and maverick record producer in the seventies and the eighties. Maile operated from his own recording studio in Rickmansworth where his understanding of Rock’n’Roll plus the considerable amount of vintage gear he had accumulated enabled him to bring out the best of bands as diverse as Motorhead, Brinsley Schwarz and of course The Inmates. Maile passed away too early but before his death he confided to Peter Gunn (The Inmates’s guitarist and main songwriter) that he regarded “Shot In The Dark” as his best production job.

Their debut “First Offence” starts with an almighty bang with their cover of The Standells’s “Dirty Water”. Already a garage-rock classic in its original version, it becomes here a menacing hymn to London with a noticeably fatter guitar sound and Bill Hurley’s growl acting as the icing on the cake. Lots of bands of The Inmates’s era had trouble transferring their power a a live act to tape but “First Offence” is a great album. Arthur Conley’s “Love Got Me” shows the band’s soul side with its horn punctuations. The first original song “Mr.Unreliable” features an excellent driving bass line on the choruses while “The Walk”, an early rock’n’roll song published in 1958 get The Inmates steroid shot. The frantics “Jealousy” and “Back In History” both penned by guitarist Peter Gunn prove the effectiveness of the bands twin guitar approach. An excellent cover of The Pretty Things’s “Midnight To Six Man” manages to equal the original in its aggression.

As was the normal trend in these days, the band were back in the studio less than a year later to record their follow up. With three albums released in the space of three years plus all the touring in between, it’s no wonder that Bill Hurley called it a day (temporarily) at the end of 1981.”Shot In The Dark” recorded again with Maille manning the console starts with another garage rock anthem, The Music Machine’s “Talk Talk” covered in The Inmate’s style, it doesn’t strike as hard as the band’s take on “Dirty Water” put it still is a great way to start a record. The Gunn original “Tell Me What’s Wrong” is a bonafide rockabilly classic with a spot on vocal by Hurley. It has often been said that The Inmates carried the spirit of The Stone’s original recordings, however far from picking an obvious Jagger-Richard composition, the band chose the slighly merseybeat-ish “So Much In Love You” never recorded by The Stones. Peter Gunn comes up with some great originals, the jangly “Crime Don’t Pay”sees Hurley at his most theatrical while “(I Thought I Heard A) Heartbeat)” remains one the bands greatest songs (make sure you check out the live version on their live album “In The Heat Of The Night”).

Their third LP “Heatwave In Alaska” sees them work with Shakin Stevens’s producer Stuart Coleman. As explained in the liner notes by Michael Heatley, this was a decision by WEA who had absorbed Radar Records by that point. This kind of situation doesn’t usually generate the setting for a good recording atmosphere but the Coleman-Inmates association proves to be a successful one. The sound might be a bit more polished and radio friendly than on “First Offence and “Shot In The Dark” but opener “She’s Gone Rockin'” penned by bass player Ben Donnelly proved they still rock with considerable aplomb. Bill Hurley shines on a cover of The Four Top’s “Something About You” which also benefits from the presence of keyboard studio wizard Pete Wingfield (one hit wonder with his doo-wop homage “Eighteen With A Bullet”) and sax master Junior Walker who happened to be playing in London at the time of the album’s recording. The band’s soul side really comes to the fore here, Peter Gunn writing some tailor made songs for Bill Hurley’s fantastic voice (“Broken Hearted”). The band cover The Everly Brothers with a power pop version of “You Can Bet (A Broken Heart)”while drummer  Jim Russell makes his songwriting debut with an excellent rockabilly romp titled “Three Little Sisters”. Peter Gunn again proves he can churn out great rockers at will with “Yeah Yeah Yeah”. The bluesy “Who’s Foolin Who” with its sleazy shuffle is followed by another soulful Gunn original (“Send Some Of Your Loving My Way”). Their version of NRBQ’s “Me And The Boys” issued as a standalone single (with a gritty little original called “Betty Lou” as B-Side) are a nice addition to an album available on CD format for the first time.

~
More Info on The Inmates can be found on this Facebook fan page.