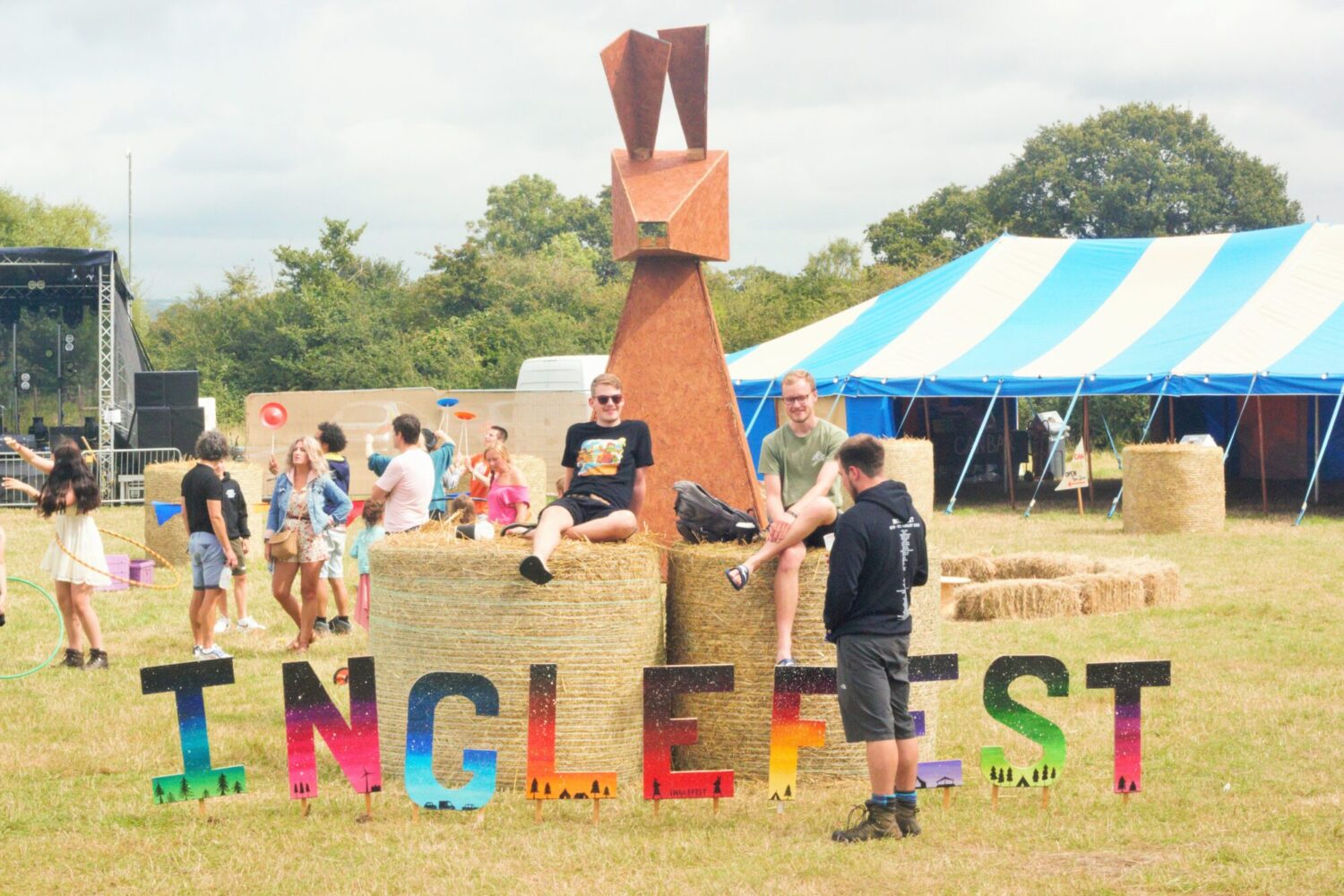 In its new home at Oxwick Farm, 2021’s Inglefest proved that ‘small and perfectly formed’ works well as the fundamental notion for a festival. Plenty of fun can be had at bigger festivals, without any doubt. Those who spent three days in the field at Inglefest, though, will have really appreciated the friendliness and homeliness that a smaller gathering brings.

All the things you needed were there in one enclosure, spread between three stages, be that a selection of things to eat and drink, or a diverse selection of great music from South-Western artists. Some attendees were familiar with the local scene, especially with those bands emanating from Bristol, but many will have gone home with a new favourite act or three to investigate further.

Toodles & The Hectic Pity will have earned some new devotees with their firecracker of a folk-punk set on the Forest Stage on Saturday night. They had the only crowd surfer, stage invasion and peer-pressure-enforced encore of the weekend. Other high-octane highlights came on the Tent Stage from Cosmit and Tree House Fire. The former combined driving punk attack with strong vocals, whilst the latter generated such energy. It was merciful that the tent was open-sided and could let some of the energy escape for the sake of its structural integrity.

Nicholson Heal, Rozelle and Intoku all packed the tent, drawing more and more listeners in as their sets progressed. Intoku’s set was one you really felt, both physically and emotionally, their widescreen cinematic sound gilded by spectacular, soaring vocals. Nicholson Heal had two stand-ins within their team of six, but you’d never have noticed. Layer upon layer built up through their songs, frequently surpassing the levels of intensity that the audience thought they could reach. As with many bands this weekend, it was Rozelle’s first show back in a very long time. Just how much they clearly enjoyed it was reciprocated by a buzzing crowd.

Inspired by the Toodles lunacy, there was glorious whisky-inspired frisson on the Forest Stage on Sunday night from The Rhythm And Booze Project. That stage also lent itself to some less overtly hedonistic and more cerebral displays over the weekend. Eli Carvajal turned his enviably epic family history into emotive storytelling through his songs. Equally, Erica Freas delivered songs that we would as happily read as verse as hear. Kate Stapley was delighted to be out of lockdown and especially pleased to see people, having spent all day alone in a plant shop. Sunday opened with Yasmine Kabbara-Dolby playing her own songs live for the first time and showing great potential.

Regime on Friday night just about edged it on the battle of the main stage headliners, with sheer energy and charisma, but Crinkle Cuts ran them close on Sunday, ending the party with brass boldness, harnessing a weekend’s worth of joy. The reggae bounce of Bare Jams on Saturday night was well-received and will have ensured that many people slept in on Sunday to recover after skanking with them.

Beyond the headliners, The Scribes really filled the Main (Hare) Stage with their Chemistry, Duracell unstoppability and with winning smiles, proving that they could form words on the fly about almost anything. Gully and Lyle! also brought their big personalities to the Hare Stage. Lyle! sang about something that was big too, leading one or two parents to cover their kids’ ears.

The sets by Dogeyed and Immy made you smile for all the right reasons, including Harriet Elder’s fateful decision to open a lively can of Guinness mid-set. Performances by Sam Animal and Naomi Johnson brought us an array of captivating voices. Dave Huntriss showcased his impressive songwriting and made us wish that The Malago Ballroom were still together. No Feathers, Sun Spot and Run Logan Run were all impressively tight units.

A special mention is due to Sweet Chilli Mayo (Inglefest’s house band), who covered for absent acts on each of the three days. Named after their favourite condiment sauces, they gave us acoustic versions of classic songs, with two guitars and a party spirit. By day three, necessity being the mother of invention, they decided to rock their approach up, with the addition of a drummer, culminating in a raucous version of Killing In The Name.

A similar appreciative tip of the hat must go to Inglefest superfan, Matt. Those used to seeing Big Jeff Johns giving it loads at the barrier at shows in the vicinity could only assume that they’d found his brother from another mother. Matt’s energy single-handedly raised the festival ambience an extra notch.

It’s great when a grassroots festival neither feels small nor thinks small. Inglefest is one such gathering. It’s clear that people in the know return to Inglefest year-on-year. Once you’ve spent three days under its influence, you can easily see why.

All words and photos by Jon Kean. More writing by Jon on Louder Than War can be found at his author’s archive. He tweets as @keanotherapy.