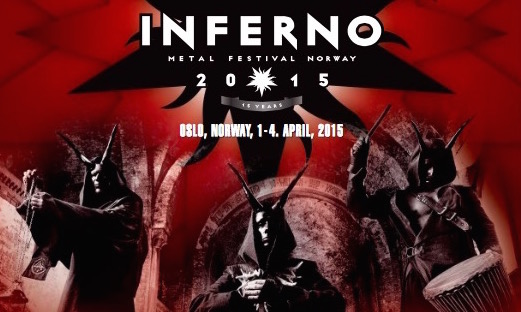 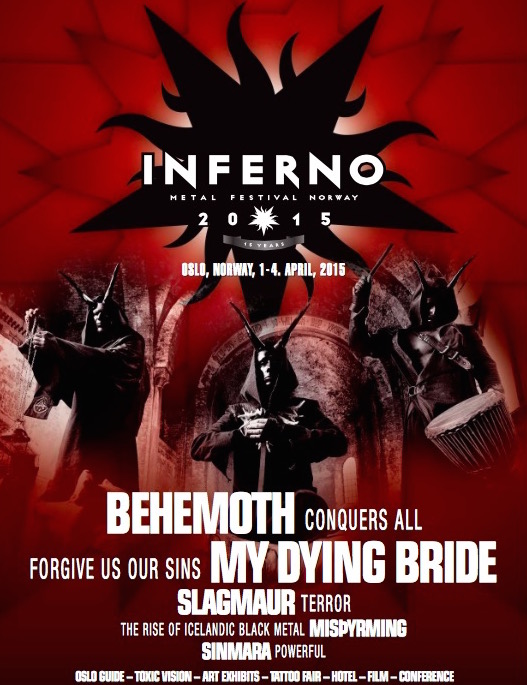 Gaye Black (aka Gaye Advert) talks us through some of “The Blacklights” of Inferno Festival 2015, the fifteenth edition of the popular Nordic (black) metal festival at which she not only saw lots of great bands but also interviewed 1349.

If it’s Easter it must be Inferno again! The 15th anniversary year too. We arrived a little later than usual but in good time to see the main event (for me) of the first night of the festival proper, Norway’s great 1349 (see photo below). Augmented by Destructor from Morbid Angel on second guitar, Ravn, Archaon, Seidemann and Frost did a blinding set, complete with fire and swirling mist, despite a couple of hiccups with the sound and stretching strings. (Check out Gaye’s video for Massive Cauldron of Chaos.) 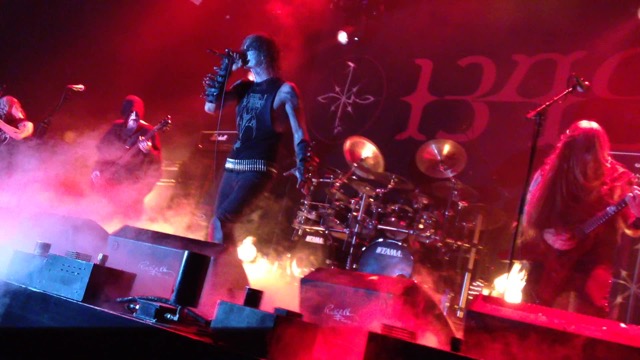 Behemoth also put on a spectacular show, the best I have seen them, and although they had dropped their customary cover of Turbonegro’s ‘I Got Erection’ from their set, they did do the irresistible ‘Ov Fire and the Void’ so I was happy!

Day two started with a guitar clinic held by Arnt Obsidian Gronbech (see photo below) who demonstrated his style which, he revealed, developed from not using an amp when he first started to play. He played along to old and new songs by his band, Keep of Kalessin, and discussed the difference between various genres. We also learnt that he actually used to be able to hit his strings 18 times per second! 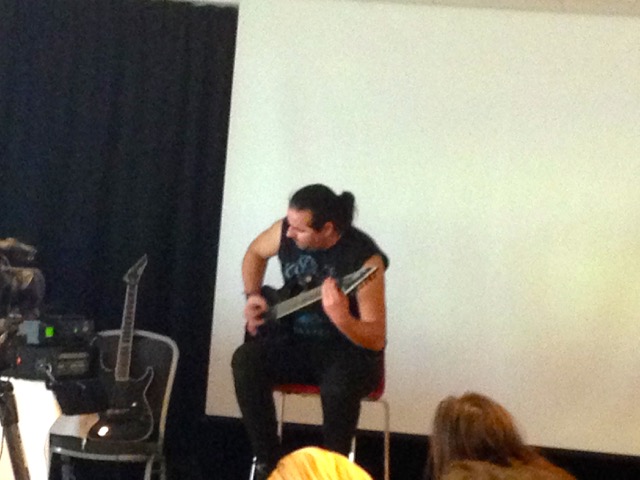 There was some amazing art in the exhibition at the hotel from the likes of Zbigniew Bielak (pictured below), Marcelo Vasco, Nick Morte and Trine Grimm. 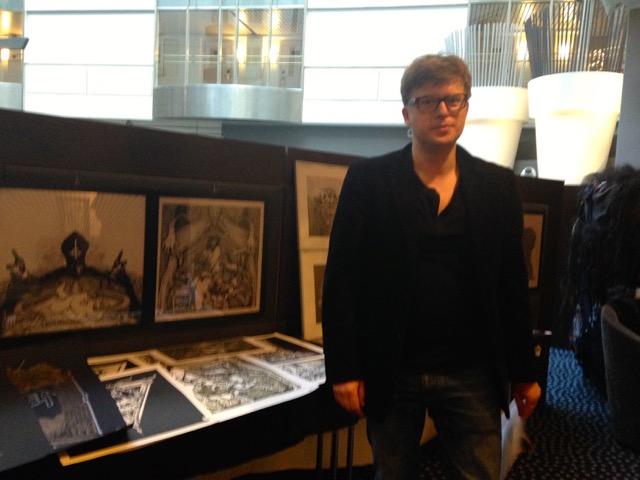 Running into Andreas Tylden, frontman of Norway’s One Tail One Head, who had deejayed at the neighbouring Kniven Bar the previous night, I asked him how he came to also be in Finnish band Behexen. He explained that as he was actually Swedish and that he was used to popping around Scandinavia. (Below is a photo of Andreas and your author wearing rival Behexen ’Nightside Emanations’ t shirts!)

Other deejays at the festival included Abbath, King, and Dirge Rep, and each afternoon Sindri and Kiki did a set of horror film music and metal on cello, acoustic guitar and cajon in the hotel bar.

Much has been written about Grammy nominees 1349’s incredible aural onslaught and the quality of their musicianship, so I thought I’d find out a few other facts from their excellent guitarist…

Gaye Advert: Any bands at the festival that you particularly want to see?

Archaon: Goatwhore, My Dying Bride, and Behemoth – we’ve toured with them, great band.

How much input did you have in the planning of the pyro and lighting during your set last night?

We discuss and plan the lighting together and with the lighting guys. They have to know our set as well as we do in order to synchronise the changes. We mainly have red lighting with some white too. Same with the pyro. We use Antichristian, who is a specialist in pyro as well as being the drummer in Tsjuder. Last night’s set was streamed, so it was watched around the world as it happened.

You and Frost always blow fire at the start when you play, I remember reading that you were given the wrong fuel at a gig in Ireland?

Ah yes, petrol, that was in Cork. We always do it unless the venue bans fire, and we can’t do it in the States as it was banned there after the tragedy in 2003 where 100 people died in a fire at a Great White concert.

Where do you prefer playing, on home turf in Norway where the fans are more civilised or in places like London where the crowd is rather wilder?

I like both, London is very good, and Los Angeles and New York. I guess on balance I prefer the UK as the audiences are so energetic. We played on the 70,000 Tons Of Metal 4 day festival cruise around the Caribbean in January which was a blast, and a really huge arena in Japan. We should be back in London in the autumn.

What music did you grow up on?

I started off on ’80’s hard rock and metal, Lita Ford, Bon Jovi, what my parents were listening to when I was 9 years old, Skid Row, Motley Crue, then Metallica. I got into doom in the ’90’s, bands like Paradise Lost.

You tour regularly, that can strain relationships in some bands, how does it work with you? Do you have day jobs?

We’re a democratic band, we plan everything together, and we have the same interests. We’re all cat lovers [Ravn had to dash off after the gig as he had a sick cat]. If there’s an elephant in the room we address it. We all have flexible jobs, Ravn is a freelance lighting engineer, Seidemann is a freelance consultant, Frost has worked as an IT consultant and of course is also in Satyricon, and I work for the post office service department.

That came about when we were touring in Minnesota. The only thing we have on our rider is some good quality beer, and Frost and I met a brewer called Todd Hall when we were picking up some beer, got talking, and he offered to produce it. It’s a black ale and is 13.49% proof (!). 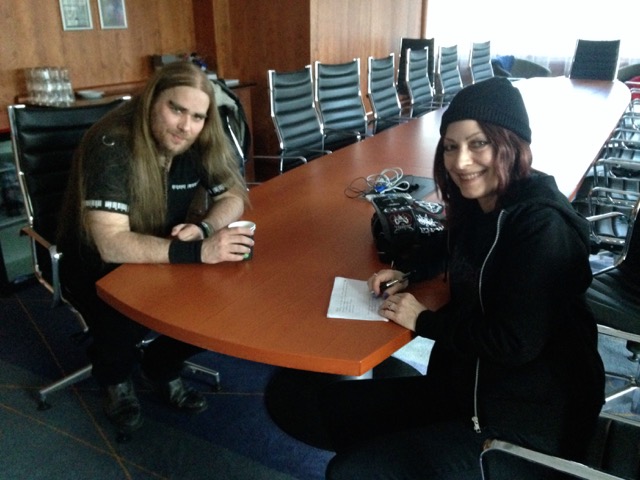 (Fans of 1349 should also check out our interview with Ravn from December last year.)

Maybe they’ll bring some when they come to London next! 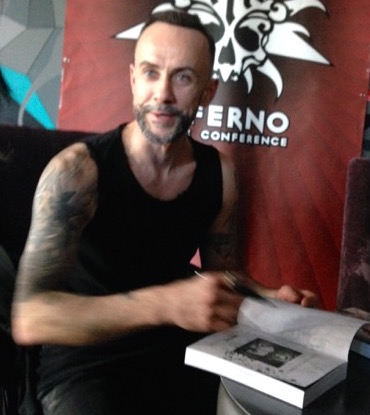 Back in the bar was Nergal’s (see photo right) book launch and interview. The Behemoth frontman came across as a very nice chap – and interesting too.

Then over to the venue for a full speed set from Goatwhore, the American black / death / thrash veterans. This was  followed by Crescent from Egypt, whose ancient Egyptian influenced death metal charmed the crowd.

A bit of meeting up with friends and then it was downstairs to get in place for Sargeist (see photo below of Shatraug and Hoath Torog from Sargeist) which was just as well as the venue was rammed by the time they came on, and we got to hear them soundchecking which was a bonus as they only played for 50 minutes. And very good minutes they were too. Check out Gaye’s video of their track Echoes from a Morbid Night). 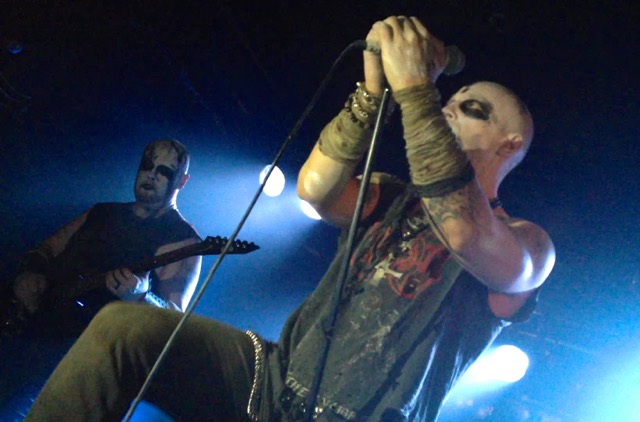 The Finns played a song or two from each of their albums, kicking off with ‘Black Fucking Murder’ and closing with ‘In Charnel Dreams’ from the latest offering ‘Feeding The Crawling Shadows’ in which Hoath Torog mixes his classic screaming vocals with a more bellowing approach to good effect. Combined with Shatraug’s distinctive melodies it made for a killer set. It was great to see them at last, and as they will only be making one more appearance in 2015 at a festival in their homeland in May, I was pretty lucky to catch them.

Closing the second day was Enslaved, one of Norway’s biggest bands. Their brand of Viking black metal with a bit of prog and alternating black and clean vocal styles is hugely popular. 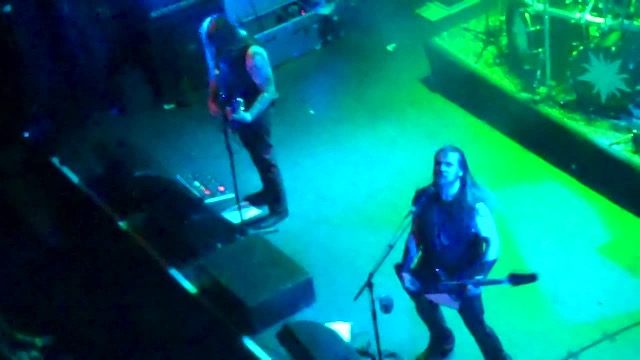 Passing up the delegates’ drinks reception (yes really!) in favour of a bit of culture, we paid a visit to the Museum of Decorative Arts and Design. It is well worth seeing, an interesting collection in a beautiful building, and even the temporary exhibition of contemporary embroidery (see photo below) had hellish elements. Very appropriate! 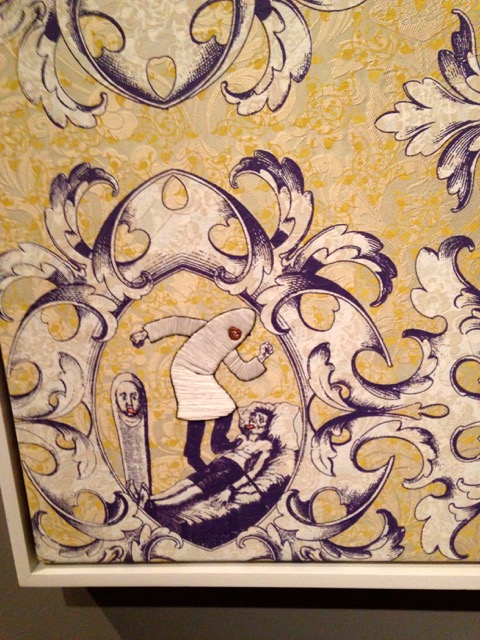 First band of the night was IXXI (see photo below), who won the new bands’ competition to fill the opening slot, which I was glad about as I voted for them! Featuring Acerbus from Ondskapt, the Swedes delivered a lively set of thrashy blackness. 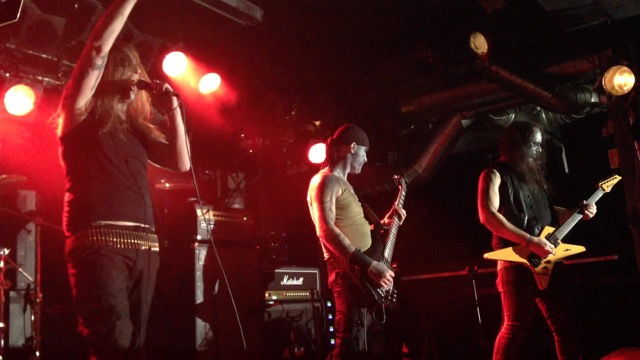 Secrets of the Moon (photo below) were up next, with an atmospheric and powerful set, quite different from last time I saw them and more memorable. 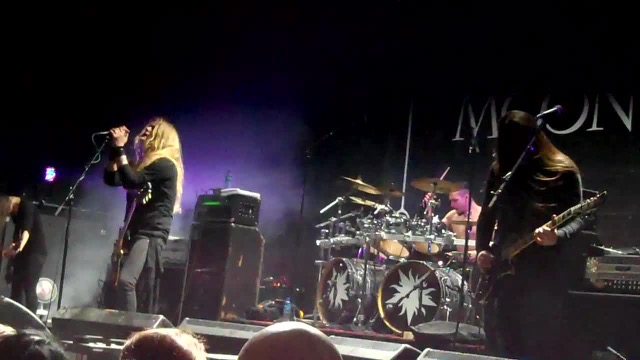 Then it was Kampfar’s (see photo below) turn to warm the audience up with an impassioned set of Norwegian folklore tinged black metal with nearly as much pyro as 1349. 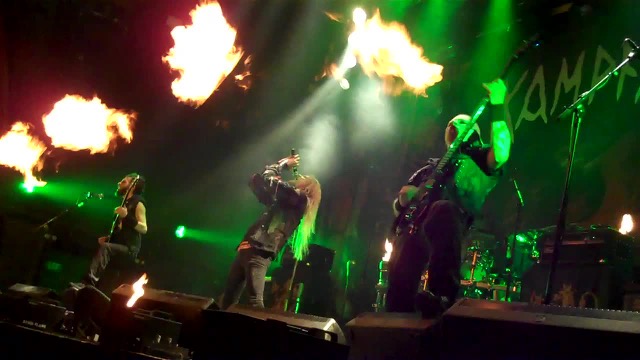 Downstairs to the unexpectedly captivating Slagmaur (see photo below), their appearance – two hooded bird skull headed members, one hellish butcher with a red apron, and one pig headed red velvet swathed figure created a theatrical atmosphere that enhanced the slowish, ominous material. I was puzzled that the drummer seemed to be reading sheet music, but it seems that he was controlling the click tracks so they could use the symphonies on the album. They have very rarely played live and I believe the members are quite fluid, so this was quite probably a one-off. I couldn’t tear myself away to go to Dayal Patterson’s signing session of his new book ‘The Cult Never Dies’, so I will have to pick one up at his next Metal Mass night at the Black Heart in London! 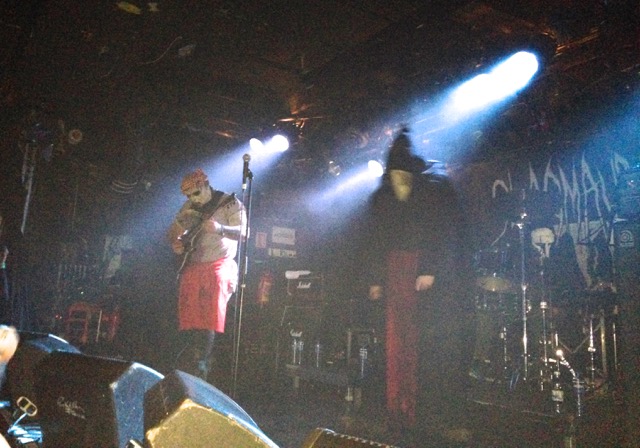 I had seen Dodheimsgard (see photo below) at Inferno before, so their black metal-turned-industrial style was familiar.  They are certainly not formulaic, their set veered from one genre to another. Pretty good although the vocal style can get a bit much. 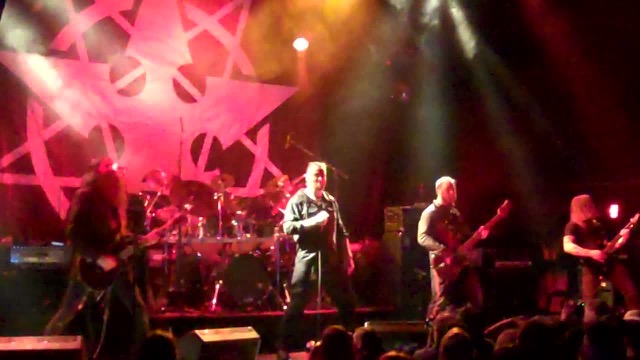 Italy’s Mortuary Drape (see photo below) closed the proceedings on the John Dee stage. The hooded veterans seemed on good form, although I always feel there is a certain spark missing in their music. Still, all in all a good few days! 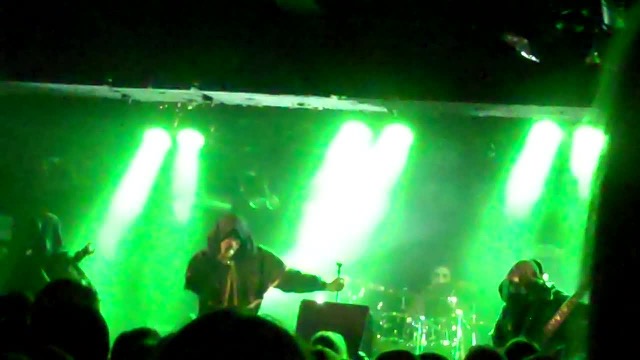 All words, photos and videos by Gaye Black. More writing by Gaye on Louder Than War can be found at her author’s archive.