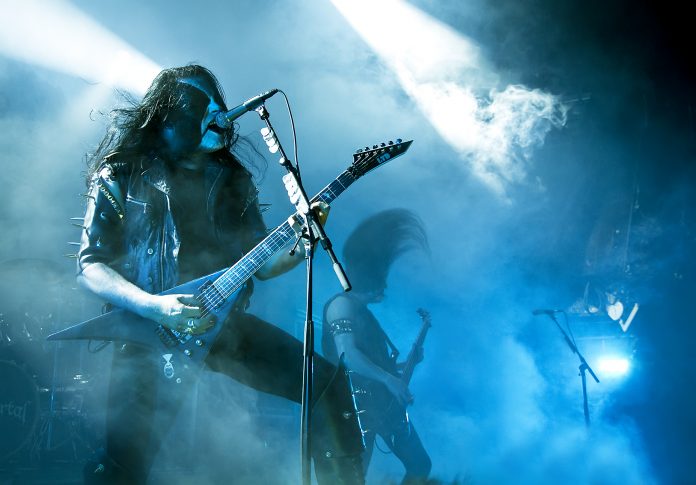 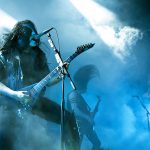 There were more highlights than ever this year, the first day’s line up improved a thousand fold with the late addition of the mighty 1349, who were brilliant as always, from the moment that Frost and Archaon blasted fire into the air to the last note. They are always really full-on and if I had to choose one band as my favourite, it would be 1349. For a change, I filmed them from a balcony, as I’d promised a drummer friend I’d get some footage of Frost. No danger of my camera catching fire for once! Added bonus – vocalist Ravn reappeared on the main stage a couple of hours later to sing an old Celtic Frost song with Triptykon, in a reversal of Tom G Warrior’s appearance during 1349’s set on the same stage in 2008 if I remember rightly.

Earlier on the first day, The Konsortium, who included members of Kvelertak and Mayhem, played an interesting mix of black metal with a hint of punk, thrash and general unusualness. I had not come across them before, and they maintain their anonymity behind plain white masks. The singer, who bore a resemblance to Kvelertak’s Erlend Hjekvik, appeared to be reading from a book ”â€œ maybe a bible with the lyrics stuck in, which he tried to set fire to during the course of their set. Fun.

My friend Billy Cockroach (aka Mayhem’s first singer, Messiah) joined Vesen on vocals for their cover of Deathcrush, a fine moment, which reminded me of his guest appearance at Mayhem’s 20th anniversary show at 2010’s Inferno, when he sang Pure Fucking Armageddon, while a crucified Attila haemorrhaged blood.

On day two Merah opened the main stage in an impressive manner, combining good musicianship with spectacle. The vocalist high up on a ledge in front of a screen, and at one point, bird headed figures led out a chained Gollum type figure.

Tsjuder lived up to expectations, the no frills straight up black metal three piece delivered a set of their best songs. Great riffs and drumming, good to see them at last!

Day three kicked off with Throne Of Katarsis who were really memorable. They had been going to support 1349 when they played in London a few months previously but didn’t make it, and had delivered an atmospheric set at Inferno two years ago on the John Dee stage, although their over enthusiastic smoke machine had made them all but invisible! This time they played as a four piece and were much better, and the haunting tunes from An Eternal Dark Horizon and Ved Graven lodged in my head for days afterwards. Epic.

Svarttjern returned to the John Dee stage and got the crowd going with some great songs from latest album Towards The Ultimate, along with Code Human and Ancient Shadow Revelations from the first album. Paced halfway between Throne of Katarsis’s slow burning atmosphere and 1349’s breakneck barrage, they were as enjoyable as the last time they played Inferno.

One Tail, One Head rounded off the night on the John Dee stage ”â€œ the same slot as Urgehal had had the previous year, and musically, were not dissimilar. Their songs, most of which I hadn’t heard before as they have not released any albums or, indeed, anything on CD, were hooky and instantly likeable. Their appearance was very Watain-like, but without the smell of decomposition, and it was an intense 40 minutes, only interrupted by a bit of tuning up and the singer wandering off stage a couple of times between songs. Great stuff!

Other diversions included the Munch Museum (finally got to it!), a black metal exhibition at Popsenteret, put on by the guys at Neseblod Records and Metalion, which included some very early Mayhem footage projected onto lace curtains in a garden shed installation (!), a visit to Neseblod, an exhibition of Per Ole Hagen’s metal photography at Galleri MAP, and a metal quiz in the hotel bar hosted by Peter Vegem and BÃƒÂ¥rd Eithun of Mongo Ninja and Blood Tsunami, and news that both bands are to play in London in September!!

The only band I missed that I would have liked to see was Gate to Khaos, who played on the club night, before I arrived. But I’m sure I’ll get to see them sooner or later. Inferno remains the best festival there is, from the legendary breakfast buffet at the festival hotel to the great sound on and brain scrambling strobes on both Rockefeller and John Dee stages.

So there you have it, top 5 were Throne of Katarsis ”â€œ for being better than last time, One Tail, One Head and Tsjuder for being the first time, Svarttjern for being the same as last time, and 1349 for every time!