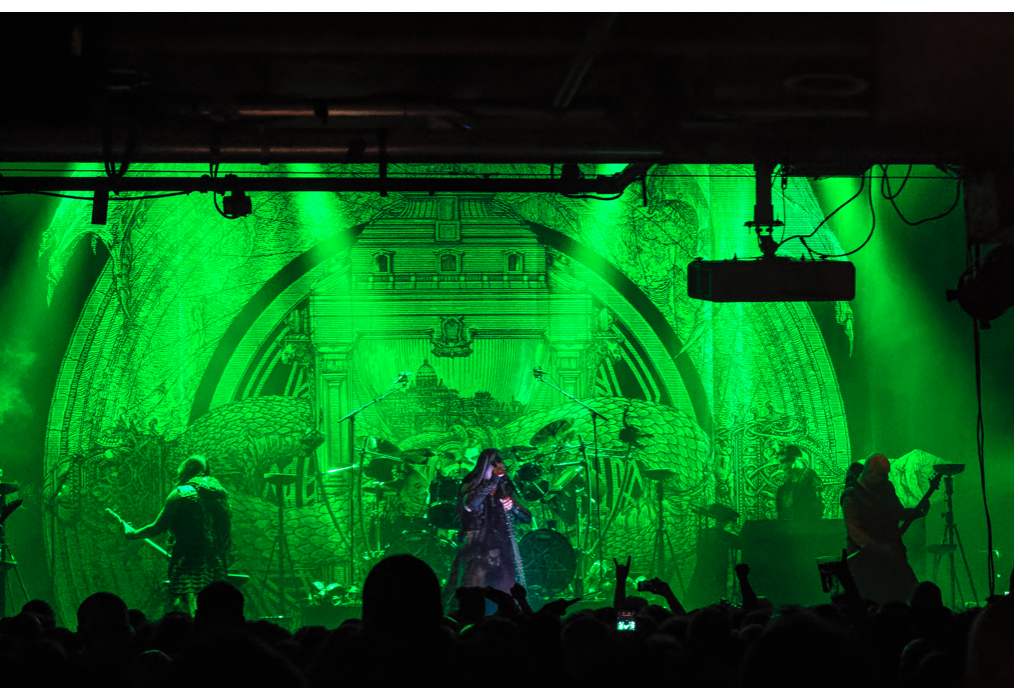 I was hoping SVARTTJERN’s set would be worth the 3.30am start to the day in order to catch an early enough Oslo flight, and they didn’t disappoint. Full on as ever, Hans Fyrst still sticks his tongue out in a disturbing manner when not spitting out lyrics to old favourites like Breathing Soil and Ultimatum Necrophilia. A new song, Prince of Disgust, sounded promising, and closer Code Human had everyone going.

While SHAKMA provided a set of thrash on the melodic side, we headed off to check out the artists exhibiting. Particularly impressive were the dark, spooky creations of Christine Linda aka Tomarum from Sweden. 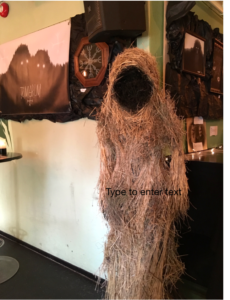 THE BLACK DAHLIA MURDER’s fans created the first circle pit I’ve witnessed in Norway from the safety of the first level balcony en route to the rooftop barbecue for a rather splendid jackfruit burger. 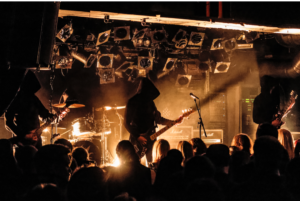 Norway’s INCULTER provided a set of tight speed thrash with some good technical guitar playing, followed by URFAUST, who packed the John Dee venue with their unique take on doom with a distinctive, at times operatic, vocal style.

DIMMU BORGIR rounded off the evening in grandiose style with a well rehearsed routine. There was smoke and fire and enough favourite songs to delight the assembled multitude. 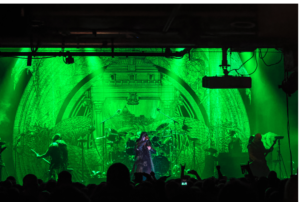 Starting off at the Inferno Music Conference for an interesting discussion entitled ‘Educate the Fan’ about how much a band should or shouldn’t reveal to their public. Then off to the Astrup Fearnley Museum of contemporary art for a couple of good temporary exhibitions and to revisit the permanent collection. The unseasonably warm weather had brought out sunbathers and swimmers to the lido outside to my surprise. Then back to the comfort of the hotel for the next session at the Conference, ESTER SEGARRA’s presentation of her music and photography book, Ars Umbra. Her images looked superb blown up on the screen, and it was good to hear about her approach to photography and how she had put the book together.

RAGNAROK’s opening set had to be delayed a few minutes as word had got out about the visual spectacle they had planned, and the queue to get in stretched around the block. They had certainly spent their entire budget on pyrotechnics, and their performance was equally spectacular. I’ve always been impressed by their relentless drumming and infectious riffs throughout albums such as Malediction and  Collectors of the King, and they covered some old favourites, including Blackdoor Miracle, with Hoest from Taake on guest vocals.

Then it was downstairs to catch Oslo’s psychedelic doom trio SUPERLYNX. Their haunting vocals and melodic guitar work was very impressive. 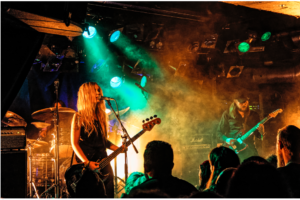 Billed as Swedish blackened heavy metal, TRIBULATION turned out to be quite gothicy, especially the guitarist flailing around in veils, and generally quite easy on the eye and ear. 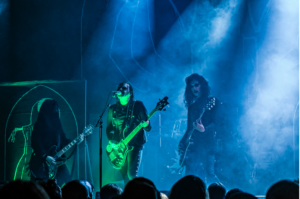 Italian acid doom satanists CARONTE provided a more mellow atmosphere with their candles and robes and nice guitar work. Not normally quite my taste, but the great sound and general feeling made it pretty enjoyable. 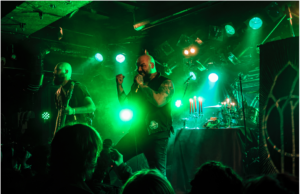 Following them on the John Dee stage was SKOGEN. The Swedes drew quite a crowd, and their earlier material came over best as the vocal style wasn’t as operatic.

I never tire of listening to Krakow’s MGLA, and tonight’s set was as excellent as ever. Every song is a classic, and they totally ruled the Rockefeller stage. They’re not big on song titles, but they covered tracks from Groza, With Hearts Towards None, and their most recent, Exercises in Futility. As ever, they were static, anonymous behind the hoods, with nothing to distract from the hypnotic interweaving melodies. If there was a prize for the most strokes of a guitar’s strings, the guitarist on the left in my video would have certainly won!

German black/doom outfit THE RUINS OF BEVERAST closed proceedings on the John Dee stage, their close knit slowly building songs underpinned by a thunderous bass, despite the bass player’s leg injury causing him to be propped on a chair. Not being a big death metal fan, the only bit of headliners Hypocrisy’s set I saw was on my phone from the comfort of my hotel room, but they were certainly going down well.

Saturday morning brought drum and guitar clinics at the hotel, but we headed off to visit the Historical Museum, which had a Viking exhibition on. Then off to Kniven bar where Purple Hill Witch were doing an afternoon set, although we could only hear them as it was full up, but they sounded pleasantly doomy.

A doomier take on black metal from competition winners ACÂRASH. They were quite hard to pigeonhole but quite easy on the ear.

Norway’s AVAST sported an extrememly tattooed vocalist and soaring and choppy guitar work that reminded me of A Place to Bury Strangers. Their set bore out the black metal/post rock description but with a psychedelic tinge. Surprisingly good.

Back up to the main stage for GAAHLS WYRD, which had something for everybody, as ex Gorgoroth front man Gaahl included songs from his previous bands as well as new material from his latest project, and his commanding presence and sometimes clean singing, sometimes black metal style held the audience rapt. 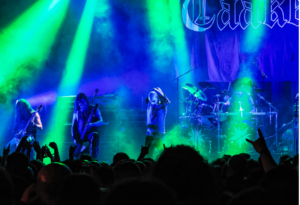 Next a wander up to the rooftop bar to catch some of ERIK UNSGAARD’s non metal dj set, including Death in Vegas and the Prodigy! The Sarkom front man said that a new album was on the way that had been six years in the making and would be the best thing they’ve done, and would be his final one, which was sad news  as they’re a favourite of mine.

Back down to the John Dee stage for some proper old school blackness from Norway’s MORK, with a set comprising largely of songs from their very good newly released album Det Svarte Juv and a couple from 2017’s Eremettens Dal.

TAAKE’s set comprised songs from throughout their career, with Hoest darting around the stage like an evil goblin on speed, keeping the energy levels high. Vrangsinn, formerly of Carpathian Forest made a guest appearance for a cover of The Cure’s Cold. I have probably seen them more than any other black metal band over the years but they continue to be as absorbing as ever.  COR SCORPII finished off the night at the downstairs stage. Melodic, rather folky blackness.

Day four started with a ferry to the Viking Ship Museum to marvel at the intricate carvings and how exposed the Vikings would have been when travelling considerable distances in the relatively small and shallow ships.

As usual, the first band of the night was the one I was most keen to see, and Czechoslovakians CULT OF FIRE did not disappoint. An impressive set both visually and sonically, with incisive guitar work providing both slow atmospherics and riffier melodies.  There were plentiful candle flames  as befitted their name,  and they certainly won the prize for the biggest headwear!

ARCHGOAT were certainly on form for this, their debut outing at Inferno. I had previously found their vocal style a bit too harsh, but this time it fitted in with the overall aural assault. Finnish black metal invariably finds favour with me though. 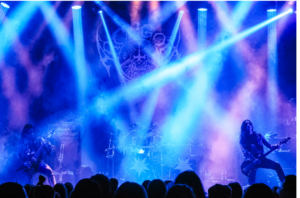 Dutch symphonic black metal band CARACH ANGREN put on a good show. Rockefeller is a good venue for theatrics, and their dramatic storytelling involved rising columns, the murder of a dummy and animated keyboards. The lighting was innovative too, and the music totally tight.

As ever, 1349’s set was heralded by drummer Frost and guitarist Archaon fire breathing from the front of the stage, before they launched into the set proper with Godslayer. Subtle they aren’t, the constant sonic barrage matched by enough pyro to heat the place for a week. Driven along by Frost’s inimitable drumming they drove the crowd into a frenzy, with circle pits and crowd surfing while security struggled to keep flying bodies out of the flames.

MISPYRMING closed the festival downstairs with a set of intense Icelandic black metal with long instrumental periods that was a suitable contrast to 1349 and a fine way for me to finish, so I left Opeth to the more prog minded and retired 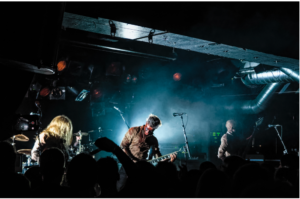