Once again, easter in Oslo with my video camera…

Wed was Inferno club night. First off was the opening party, which featured some rather nice lemon grass infused beer. Then downstairs to John Dee, where KAMPFAR were playing.

Skipping the rest of the club night bands we retired to the hotel bar where Hilde Hammer was deejaying, and worked on a playlist for next day’s cruise as I had just been asked to deejay on it and hadn’t brought any music! We also checked out Kim Holm’s art exhibition in the next room. He was also present at the side of the stages for every band, capturing the live action with ink on paper whilst headbanging throughout. Unique and very talented.

The festival proper kicked off on Thursday with a cruise around the Oslo fjord with Japanese doom band CHURCH OF MISERY doing a live set and me playing the best that spotify could offer. Both met with much approval!

Back at the venue ELDJUDNIR provided a set of atmospheric brutality. The Danes wore the hooded cloaks that have become increasingly popular within the black metal scene and are well worth seeing.

With a vocalist who looked like an Olympic weightlifter, Germans THYRGRIM delivered classic black metal. Maybe slightly characterless, but that could be because I was unfamiliar with their material, and there was some nice guitar work going on.

Next up was IMPIETY. This trio from Singapore have been going for decades so I was interested to check them out. They were pretty fierce and went down well, but there was too much of the death influence in with the black for me.

DIMMU BORGIR put on a suitably grand show to befit their status as the most successful and well known black metal band to come out of Norway, and the packed hall was treated to an extended set with fireworks and flames to complement their symphonic excess.

Friday. An afternoon session at the hotel featured an archaeologist talking about Viking history, Kvitrafn talking about Wardruna’s music, and clips from Blackhearts, an upcoming documentary on black metal. This featured Sina, the only black metal musician in Iran. Sina was also present and spoke about the dangers he encountered. And more free lemon grassy beer!

Norwegian VEMOD’s atmospheric music was at the opposite end of the black metal spectrum to the excellent One Tail One Head, with whom they have connections. I am not a fan of clean vocals and spoken passages, both of which were included, but in full flight they were good, and the background projection of a journey through starry skies and aurora borealis complemented the hypnotic sections.

FROM THE BOGS OF AUGHISKA comprised two Irish men who looked like they had just come from the office apart from their balaclavas. They stood either side of a large screen on which was projected black and white footage of nature scenes and an old man telling stories, while they produced a gloomy, ambient soundtrack with synths and guitar and a rumbling frequency that threatened to loosen bowels.

A STORM OF LIGHT from New York reminded me of Hawkwind mixed with Neurosis. They didn’t hold my attention for too long as I wanted to get downstairs in good time for Mgla, who I had seen them in London a few weeks before and couldn’t wait to see again.

Sure enough, MGLA from Poland packed out the venue and were as amazing as expected. They are pretty static and dress head to foot in black, including face covers, but their music is compelling. Mid paced with memorable riffs and tunes weaving in and out, which lodge in your head and won’t go away. Check out their last album ‘With Hearts Towards None’, which their set featured, and you will be hooked. Here’s part one

The programme for tomorrow as viewed from my bed… 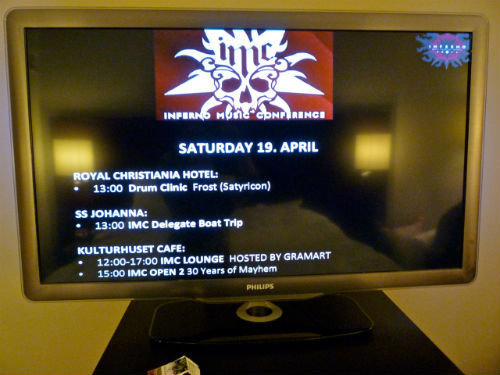 On Saturday soon after the hotel’s vast breakfast buffet finished, my favourite drummer, FROST, held a drum clinic in an adjoining room. Once we were all issued with ear plugs and seated, he played two 1349 songs and two Satyricon songs, accompanied by one of the current Satyricon guitarists. He then talked about the techniques involved, took questions, and even had a competition. Quite possibly the high point of the festival!

Then off to Kulturhuset café around the corner for 30 YEARS OF MAYHEM – Necrobutcher being interviewed by Gunnar Sauermann. This was a first for Necrobutcher and he was excellent, very entertaining. He talked us through  Mayhem’s history and much more. In fact, Gunnar didn’t get much of a look in!

Back at the festival venue for the final night. First off at Rockefeller was SIGH from Japan, with their rather eclectic type of black metal and plenty of theatrics, including bible burning and pouring molten wax over themselves.

Next came MIDNATTSVREDE, the only Norwegian black metal band at the festival that I hadn’t seen before. They had split up in 1997 and the founding member has only recently put a new line up together. They were pretty good when they got going and the frontman sung, but he was largely redundant when the guitarist took over vocal duties and did clean vocals. Somehow they didn’t quite gel, musically and visually, but still enjoyable.

Then back upstairs for GEHENNA who were as impressive as when I saw them at Incubate festival last year, songs from their WW album conjuring up an eerie atmosphere. The frontman looks creepy in a way it’s hard to put your finger on, which adds to it. 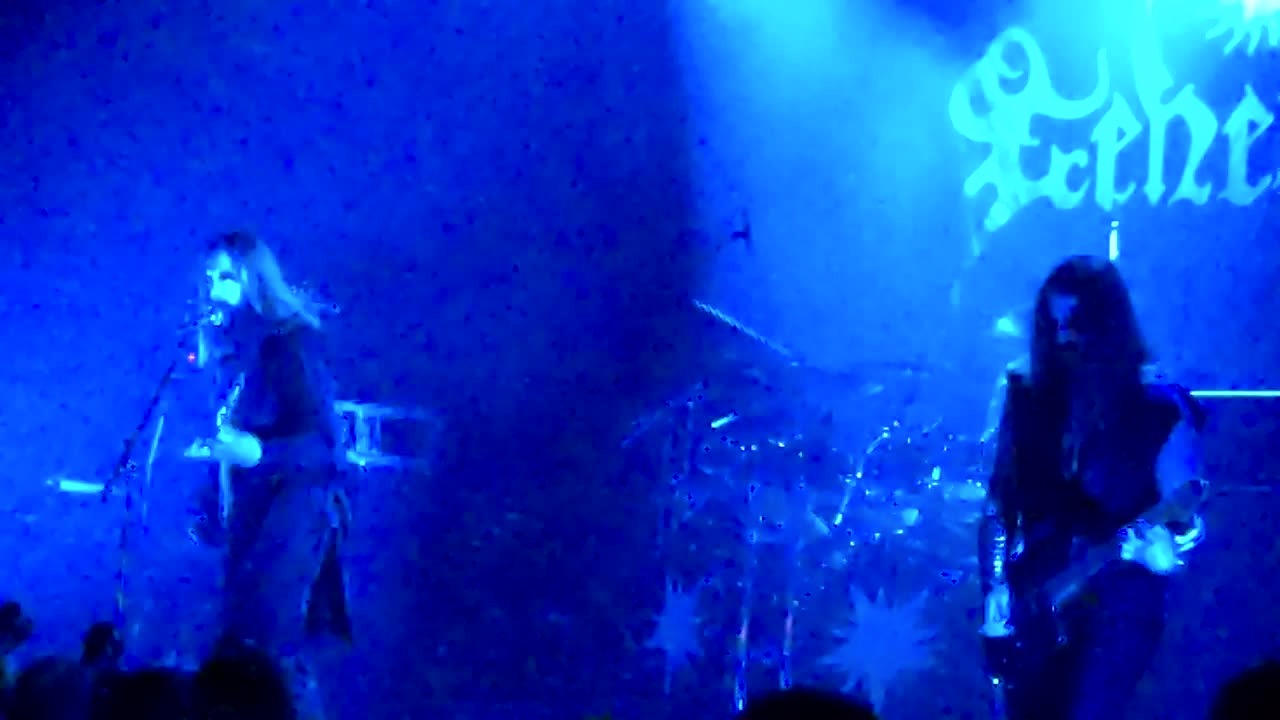 TULUS I had seen at Inferno in 2008 but having seen Khold twice last year I now noticed the similarity, as they have mostly the same members. Like Gehenna they are Norwegian and date back to 1993 and are similarly mid paced and listenable.

ORANSSI PAZUZU, Finnish for Orange Pazuzu (the demon featured in The Exorcist) were as psychedelic as expected, again took me back to watching Hawkwind in my youth.  Greece‘s ROTTING CHRIST went down a storm, as did the American BLACK WITCHERY, who were interesting although a little too brutal for my taste.

WATAIN closed the festival with a spectacular set. They didn’t smell as bad as usual, due in part to the comparatively large size of the hall, but also there didn’t seem to be much decomposing on the stage apart from the blood. The Swedes set was a bit heavy on latest album The Wild Hunt, which isn’t my favourite, but they played plenty of the stand out tracks from their last few albums. Here’s a taste