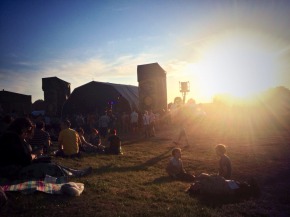 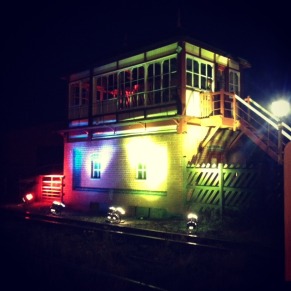 With steam trains, owls and indiepop in the Derbyshire sunshine Indietracks set the scene for a weekend of amazing music and happy, happy people.

Features editor Sarah Lay hopped aboard the Indietracks express to bring us news from the festival.

On Friday evening I found myself sitting on the grass in the open air of Derbyshire as the sun set ahead of me, just over a siddings full of old train carriages, just to the right of the Indietracks main stage where The Chills were filling the air with their sound. I supped a Strawberry Blonde ale and closed my eyes, basking in the last of the days heat on my skin.

Around me were a few hundred kindred souls ending their week the same way. Those who ambled up or away often stopped to wave, hug and exchange greetings with those they hadn’t seen since the last time we gathered here; or the last time they hit the indie disco in their respective hometowns; or last night on Twitter while sharing excitment for the weekend ahead.

It’s clear from the start that Indietracks is a festival not just with personality but with a scene.It’s carved out a niche (although indiepop is a wider genre than many assume – going beyond the jangly twee to encompass hardcore punk pop to experimental electro) and isn’t trying to grow beyond, or away, from it. For many when they step they alight from the old fashioned train, onto the old fashioned platform, they aren’t just heading into a festival but are arriving home. And it is the combined sound of the train whistle and our favourite bands that call us back year on year.

So with grins on our faces and friendships rekindled we settle in on the green before the outdoor stage and indulge in sound. Following The Chills we have Allo Darlin’, a firm Indietracks favourite, who tonight share with us a few new numbers as well as a tracks from 2012’s Europe.

And as the spotlights dancing between carriages and crowd strafe through the dusk, causing iridescent insects to glitter like stardust before fading from view we get the first festival moment: Elizabeth Morris, a ukelele and a spellbinding rendition of Tallulah that causes us all to fall silent in its wake, that binds us all together, feeling that song in our own personal way yet experiencing it very much together.

Saturday is packed with many more of these moments, across all the stages and from bands old, new and shifting members as impromptu guesting happens as bands get as carried away with making the music they love as we do with hearing them.

The tiny church stage causes the congregation to pay physical penance for the heaven of its artists as the corrugated building and size of crowd cause the heat to rise for the sweet sounds of Laura J Martin and the old school scuzz of Manhattan Love Suicides.

Over in the Engine Shed (the indoor stage) the sweat beads on brows, above delirious grins as Joanna Gruesome show us just how far they’ve come as a band since they were on the smaller church stage two years ago. Their confidence has grown and even though there are some minor issues the brutality of some of the Weird Sister songs is unleashed bringing punk and fury along with the pop. They’re joined on stage by Dean Wareham to guest on their cover of Galaxie 500’s Tugboat; he’ll later play the same stage with a headline set heavy in numbers from his former incarnation.

The main stage hosts a tremendous set from The Popguns and then closes with the kind of whimsy that runs deep in the indiepop vein as Gruff Rhys takes us through tracks from his American Interior album (documentary, book, mobile app), the songs sounding sweet on the evening air. The accompanying slide show about the man and legend on who the investigative songwriting centres, John Evans, giving a last day of term feel to the set: we’re learning but in a lazy and luxurious way.

The festival keeps the vibe going on Sunday with quirky sets from The Thyme Machine (Tunnocks tea cake anyone), an anticipation raising-run through from The Hobbes Fanclub ahead of their debut album out next month, and a sweet and storming set from Cosines (their album also highly recommended, out 28 July) and a packed out merch tent for an acoustic set by Martha. The main stage is treated to a longer set from the sublime Sweet Baboo as a pay off for Let’s Wrestle not making their appointed slot.

And then we head towards the last stop with Withered Hand thrilling on the indoor stage and Hidden Cameras exciting the faithful outdoors. Then Indietracks pulls to a halt for 2014 and it’s all change for onward journeys through everyday lives, all stops to 2015.

Indietracks is rather more than a lovely boutique festival with a quirky setting and a big heart. It is a supporter and a key player in the scene it stages and yet it has not become insular or exclusive.

The no-fuss family friendly policy means that no-one is left behind and brings old and young fans together along with older and newer bands; and while part of the scene is the look there is thankfully little judgment here, just fun and laughter with friends from yore and those you met yesterday. It is, surely, what so many a small festival could only hope to be.

Indietracks is hosted at the Midland Railway Centre in Derbyshire where you can ride the trains all year round. You can also find out more about Indietracks on Twitter and the festival website.