After a first successful edition in 2014, the Indie Daze Festival saw a return to the familiar Forum in Kentish Town with a line-up comprising some heavier headliners and in-between sets djaying courtesy of BBC radio 6’s Steve Lamacq. First band on the bill at 1.15pm were The Popinjays in their original duo format consisting of singer Wendy Robinson and guitarist Polly Hancock. The opening slot in a festival is never an easy one but they pulled it off with some excellent songs and their self-depreciating banter. Playing with a pre-recorded drum and bass track can be a tricky thing but the duo had put in the hours rehearsing and the set went without a glitch. Starting with a spirited version of “Please Let Me Go”, the opening track of their 1990 LP “Bang Up To Date With The Popinjays”, they also played “Think Abo ut The Weather” from the same album and closed with “Vote Elvis” from their second album ” Flying Down To Mono Valley”. 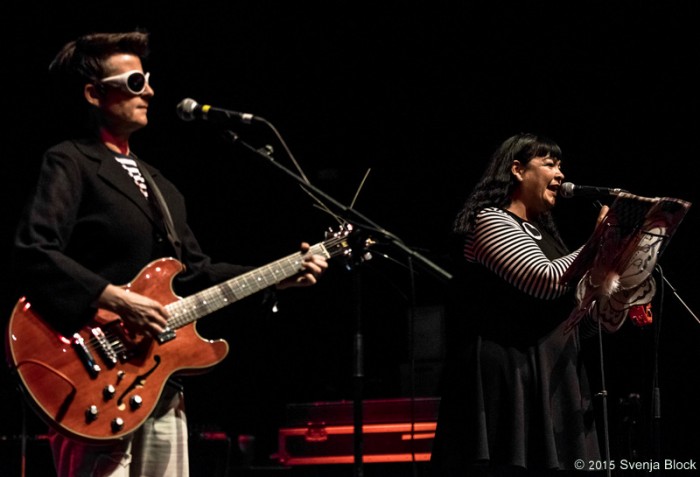 Second band on the bill was Back To The Planet, a band that originated in a squat in Peckham in 1989, they parted ways in 1995 but reformed in 2007 and have been playing sporadic gigs ever since (and are working on new material as we speak). Their brand of ska-ish rock went down well with the audience and the band gave it all with singer Fil Planet criss crossing the stage for the whole gig while guitarist David Fletcher climbed up on the high monitors at the side of the stage during “Teenage Turtles”. By the end of their set a healthy crowd had assembled and it’s an almost full forum that greeted Eat, recently reformed after a break of 20 years. Lead singer Ange Dolittle’s almost malevolent stage presence was offset by him throwing band badges at regular intervals. Featuring ex Wonder Stuff guitarist Malcolm Treece on guitar, the band display a multitude of style and musical influences and are very difficult to pigeon hole blending blues, hip hop and funk. Largely centred around their 1989 album “Sell Me A God” the set also saw them play a new song entitled “Keep My Name Out Of Your Mouth”. Not everything seems plain sailing in the band however as “Shame” is stopped at Ange Dolittle’s instigation so Jem Moorshed can retune his guitar which doesn’t seen to well with the drummer who spits out his piece of gum. 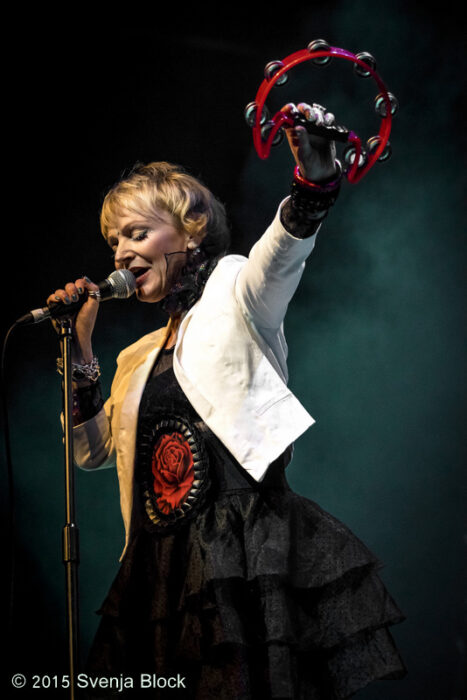 Steve Lamacq comes out of his booth on the side of the stage to introduce The Primitives. The band put on a good performance but there are some moments where you could feel things weren’t gelling on the rhythm front, the drummer was playing with headphones and seemed to be struggling to keep up but the bands mix of garage songs and more commercial pop numbers hit the mark and Tracy Tracy’s charm is as effective as ever (she got a bouquet from an audience member at the end of the set). From the Gloria-ish intro of “Sick Of It All” to the fuzzy “Rattle My Cage”, the band proved that there is far more to them than the pop-punk one-hit-wonder “Crash” (which was also played).

A feeling that we now were in “headliners” territory was palpable as the set of drums that had been used by all the previous drummers started being dismantled to make way for the kit belonging to Pop Will Eat Itself while at the same time a banner displaying the bands name was put up at the back of the stage. Mixing hip hop elements with dance beats, their sound is an acquired taste, either you get or you don’t. Most of the audience got it but you got a few who just stared at the stage in bewilderment wondering what was happening. A bit too much rock star posturing behaviour with the bass player changing basses several times and making his roadie wait for no particular reason on the side of the stage for most of the show (amendment : the bass changes were due to several songs necessitating alternate tunings, the roadie wast just staying on the wings to make sure the changes occurred as quickly as possible) . Slotting them between The Primitives and The Wedding Present was a bit of a weird choice.

The Wedding Present stage set-up was a bit more down to earth with each band member installing their own little area. The band was scheduled to play their 1989 LP Bizarro but started by playing two new songs (and in such validating Steve Lamacq intro claiming they were a band who did it their own way). David Gedge did his usual “We’re the semi-legendary Wedding Present Joke” and the band then proceeded to play a rapturously received set with the best moshpit action I had seen at a gig for a while. The more famous songs such as “Brassneck” and “Kennedy” got the best reception as did a great version of “Take Me”. David Gedge’s singing was spot on, maybe not as aggressive as the on the record but certainly more effective and melodic. They closed their set with “My Favourite Dress” that got the whole forum on their feet. 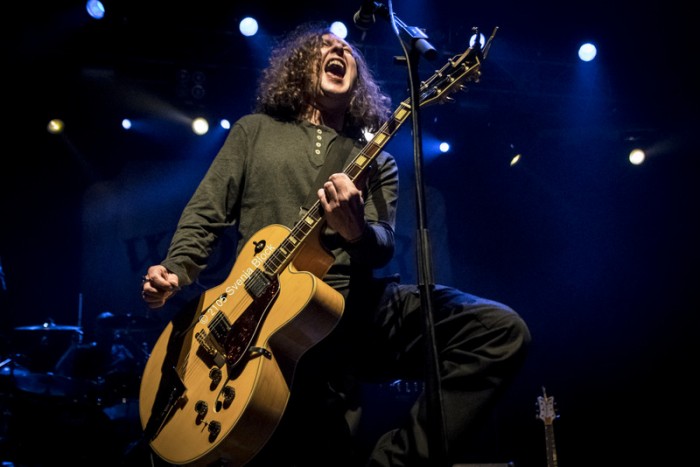 And then it was the time for another change of drum kit. It’s a testament to the perfect organization of the festival that the Wonder Stuff (the eighth and last band on the bill) started at the exact time that was on the program. Miles Hunt might be the only remaining original member in the current Wonder Stuff but they gave a good performance and far from going through the motions managed to keep their songs fresh (Erica Nockalls violin parts having a lot to do with it).  Miles has mastered the role of the rock front man to perfection, drinking wine from the bottle and telling the audience that he was “well-up for it” and beaming when the whole pit was singing along to his tunes. All the hits were played and even some rarely played songs like “Cartoon Boyfriend” got an airing and we were treated to an hilarious “Come Dine With Me” story that I won’t spoil by telling here. A fantastic day, roll on Indie Daze 2016.

All Photos by Svenja Block, You can find more of Svenja’s photos at her Flickr, Facebook and at her Louder Than War author’s archive.