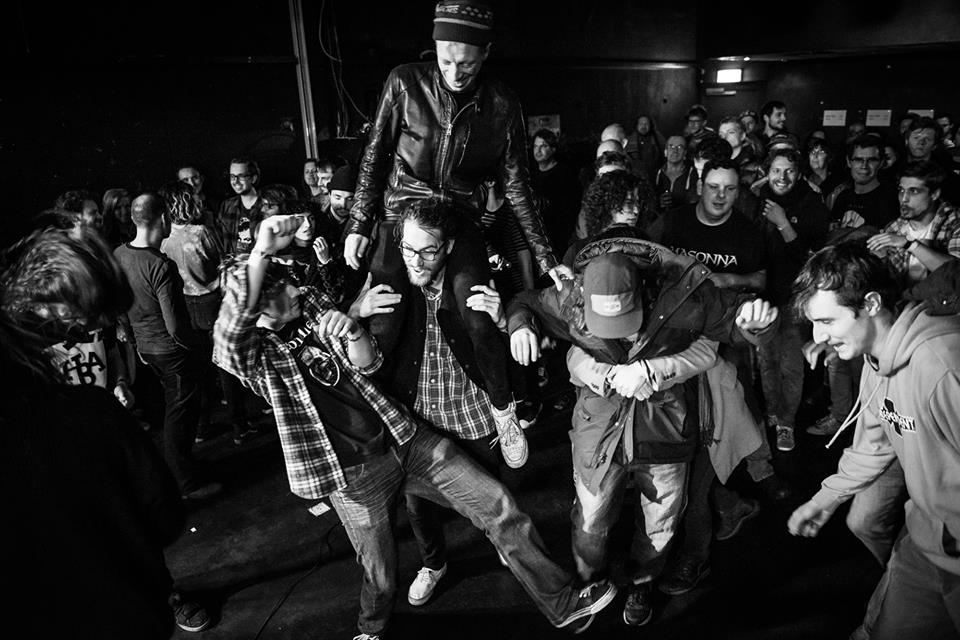 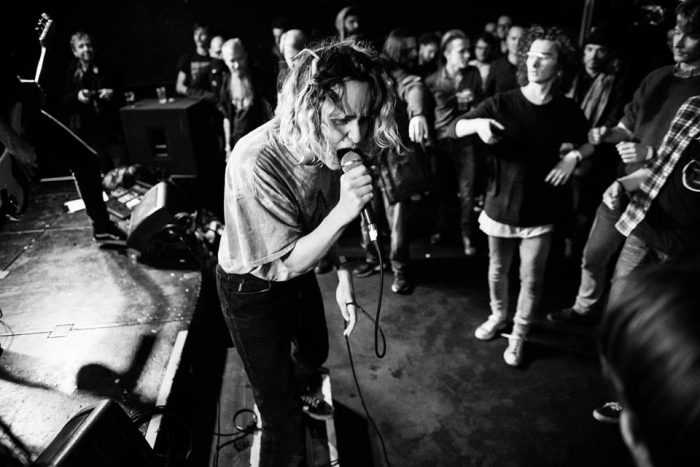 Ah, Incubate. Was this really the last Incubate? I remember people talking about the first ones (then named ZXZW) in the musty gloaming of Leiden’s greatest lost club, SUB071, way back in the Triassic Age. Some of those very same people were wandering round at this year’s Incubate, proof if ever that were needed that the festival always had a strong, country-wide underground constituency. This alternative tribe have always done their thing, heedless of the fleeting and narcissistic attentions of the national music press, or of the breathless reports generated by foreign publications, who always saw the festival as something of an alternative Camelot.

Talking of the international press, in this edition’s first (and last) fanzine, The Quietus critic and musician Matt Colgate made the prescient point that Incubate always boasted an easy going, and very human nature that meant you could enjoy yourself to the max. In the street. With no virtue signalling or academic ‘pseudery’ darkening the fun. And with little, if any, of the bijou, handknitted, ‘soupy’, “acceptability” that threatens to swamp anything alternative. No attempts at “getting people to meet each other” over some artisan food breakfast meet up, or maundering through some pop up tote bag shops here. Underground music is not, and should never entertain thoughts of being, Ikea’s handmaiden. Tilburg, for one, wouldn’t allow it. Tilburg is a town very much like the big old British mill towns such as Preston, Halifax, or Blackburn. Proud, solid, sometimes ridiculously provincial or bigoted in their civic outlook but possessing an earthiness that, if tapped into correctly, can unleash a feral, almost transcendental spirit that can’t be manufactured. And those underground foot soldiers tuned in and tramped on, watching a series of trailblazing and often uncompromising programmes. They had their own form of fun in this frowsty, self-satisfied town. They ate their broodje poms and Vlaams frites in the street-ah. And then got stuck into some obscure dark metal from Karelia (or Middleburg) at Little Devil.

You’ve probably had enough of my meanderings by now. Let’s talk of what was on the bill.

We used to have a long-standing Incubate ritual. We’d get stuck into some reasonably priced pints at the Buitenbeentje and head to the omphalos, Tilburg’s very own West Kennet Longbarrow. Paradox is the grooviest of hangs. Its bar staff are tops and they have free nuts on request. And the place has always delivered a hell of a line up at Incubate. Previous years have seen luminaries such as Baaba, Inner City Sound, Chris Corsano, and Vibracathedral Orchestra. This time it was no different, with a set of mind-bending shows over the weekend. Things kicked off on the Saturday with sound artist Janneke van der Putten, whose dreamscapes slowly rumbled into gear after a slightly indeterminate start. The querulous, bitty shapelessness of her music eventually turned out to be her trump card. The sounds ducked and dived, finding form on a sandy, windswept interface that married vocal wailings and incantations (very similar to the late, great, Gilli Smyth) and an antediluvian beat. Now, Paradox is a venue that revels in contrasts, some expected, some most certainly not. The Saturday provided a series of sonic U turns that left most wondering where their sense of balance was. After Janneke van der Putten we got three incredible shows; Sturle Dagsland is the name of two Norwegian brothers, one elfin, the other, more ursine. It’s fair to say that, together, they make a series of surprising noises.The elfin one, the singer, hopped around, played percussion with his feet, threw tantrums and introduced the band over and over in thee campest, most squeakily effete voice imaginable. His brother looked on benevolently and busied himself with making daft noises using a guitar and some pedals. Imagine being their mum! Their music could be described as the Scandinavian psyche writ large; atmospheric, unpredictable, an almost Pavlovian reaction to – or therapeutic reimagining of – their native landscape. Follow that! Well, yes, it was followed most righteously. Take a lady shredding a electric violin, ye urban arthoundz! Mia Zabelka destroyed Paradox’s Inner Eye with a carpet bombing of the senses and long, drawn out meditations in the key of Z. Her grating drones brought images of shards of coal rolling down the belt, or logs being ferried downriver. This was a demonstration of sounds at work, creating music on the way. Of course one is drawn back to Tony Conrad, but there was a rural impishness that I never picked up when I saw Conrad play. And the bit when Zabelka, grinning throughout, shredded her bow during some one woman impersonation of a sawmill, was almost entertainment Hollywood style! Encroyable. After this, MNHM launched a blistering and shining post-rock attack, a hugely intellectual, but sparkling rock-out (Mitt Sax!) that was as good as eating a whole family pack of chocolates without anyone else getting one. Their music is crisp and fresh and confident. Weirdly enough they are a poppy proposition and could build a rope bridge between slackjaw Mudhoney lovers and total metalheads with ease. If they wanted to. After this, SUM took us back to the Cambrian Age, where every drone, glitch, twist and beat (artfully conveyed through the sacred mysteries of ‘Lap Top’) felt like huge steps forward in the development of life itself. Yowsah! Fish-like we reacted slowly, flopping up the beach on our fins, as SUM’s twitches on the ambient thread forced us to take our steps on land. What a day programme! And the Sunday carried on with brilliant shows from the (temporary?) ensemble known as Loudmatter, which was one of the best adverts for interdisciplinary collaboration I’ve seen, and from the increasingly popular Deutsche Ashram. A packed out Paradox took in this duo’s sweeping, chiming melodies (all wrapped up in the most warm, healing blanket of guitar and laptop effects textures). A perfect Sunday concert it has to be said. Their debut LP, Deeper and Deeper, is the basis for their popularity; its sleepy AR Kane-sims, and fleshed out take on Cocteau Twins’ vibe circa Victorialand/Moon & The Melodies is a potent mix, and an appealing birthing chamber which harassed Moderns can use as an escape from the world as it stands. And as a live act, the band are improved beyond belief since the first time we saw them in a quiet pub in Leiden. Vocalist Merinde is still coming to terms with playing live, but that awkwardness has its own charm and shouldn’t be dismissed. All they have to do is keep going.

Is it me or has the fire been newly stoked in punk’s battered old brazier? A sharpening of the senses? Punk, and its blue stocking cousin post-punk’s, utopian Roundheadisms have never felt more appealing as a rallying point this past year or so. And there is a growing number of angry, lucid and intelligent bands willing to hold a mirror up to C21st inanities and reshape that punk spark in their own manner. We could point to ILL, Repetitor, Big Ups, Eagles, Fat Whites and (yes) Sleaford Mods just for starters. Incubate has always picked up on punk’s importance. And two terrific bands of this vein were on show in Extase; Russia’s Fanny Kaplan, and Stevenage’s Bad Breeding who tore down the place with a set of concentrated anger and bile. The band look like a bunch of squaddies, which I suppose if appropriate for Stevenage. And the singer has something of Terry Hall about him, just the way he holds himself stock still before some musical cue jerks him back into life, the spark plug reignited he tears off into the audience, his jerky spasmodic movements freaking the crowd out. Listening to them live is like being strapped into a Dodgem car that has a will of its own, or coming down off bulls blood pills. Tough on the temples and the solar plexus. Their tracks are spat out, globs of molten metal hurled out of a foundry furnace; fully formed ingots, too hot to hold and impossible to reshape. In contrast Fanny Kaplan looked to hypnotise and pr were 90’s Heads who see Fanny Kaplan in action may be reminded of Add N To X now and again. But Fanny Kaplan replace the arty groove of that band with a sinuous, spindly, almost classic atonal post-punk anti-melody. Combined with their obvious anger and worldview (even though I don’t understand Russian, that came across loud and clear at the gig. You can find out more in this article about new Russian acts) there’s something incredibly moreish about them. Even if, on the face of it, their sound brings nothing you can’t find in old Suspect or Plus Instruments tracks. They drop their anger over a metallic electro grind, backed by classic submarine bass runs and a very effective, high speed battering of the toms. The drummer was something else, using a mix of Steven Morris patterns and wild borrowings from drum n bass. Fantastic, we have to say.
V39 was never my favourite venue, it has to be said. People miss the entrance, and something always smells of disinfectant or rotting cabbage. It’s a weird and oddly morale sapping place. It somehow affected Yokocola’s gig, their trippy space-punk not really catching fire despite the best efforts of their brilliant singer, Sidhi Achmat. We stuck around for Liège’s Cocaine Piss, though, who are quietly making a name for themselves this past year. Cocaine Piss are possibly the most fun band about, a brilliant mishmash (or collision) of hard rock sensibilities and Queer punk anger. The singer – ploughing through the audience at every chance – knocked out a fabulously righteous and pithy (and howling and squeaky!) set of put downs over a tough-yet-crusty metallic base. The band are total Longhairs of the old school, happy to sleep with their Motörhead LPs. The audience, utterly lost in what to do in the face of this Ur-Slade feminine sludgefest, decided to jump on each other. There was a young chap at the front who looked like Jools Holland (camel hair coat, silk scarves) who pulled faces and struck ridiculously sub-Wildean poses whilst being flung around the room. Imagine some young shaver trying to act like Julian Cope on the front of Fried whilst dressed like an Edwardian dandy. And being thrown around by provincial metalheads. In the sweaty, fusty gloaming of V39, with a stomping beat and yowling vocals it was a profoundly beautiful moment and much needed proof that music – punk music – is a balm and a bind and a torchlight for our troubled times.

If this version of Incubate is to be buried now, it should be done so with full rites befitting a chieftain of a noble clan. Or maybe it was at the predictably raucous afterparty, with the appearance of Leyland James Kirby (a Head who understands that psychicke leylines need nourishment), who drove in from Poland to pay his respects to the House that Vincent built.