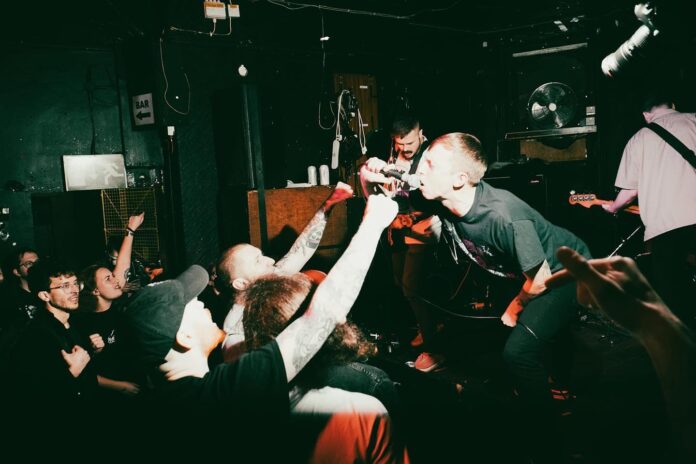 It’s dark. Manchester city centre is always dark at night. Darker than other cities. Maybe it’s the imminent threat of constant rain or the permadamp buildings that lean over you as you stumble along the dimly lit streets. On the corner of one such street lurks the Star And Garter. It may be rough, but it’s more than ready to drag you through the doors and into the altered-Narnia-ego world of hardcore punk rock.

‘Bliss’ is the new album from local hooligans Incisions. It’s their second long player, tho’ long player needs to be in inverted commas as there’s nothing long (or boring) about ‘Bliss.’ It is twenty minutes of snotty brattish bliss. (Check out their LTW interview from last year).

It was released last year by serial-mainstream-music-murdering label TNS Records, just as Downing Street started partying again and the rest of us locked down. Our only option was to order it online and look at our cancelled gig tickets. So, rearranged; tonight’s album launch has been anticipated for almost twelve months.

And… like the album, this gig was sold out a long time ago.

The doors are open, the lights are down, the venue is packed and the bats have been released. Feedback pierces through the mere mortal souls who are cowering before Going Off. Based within spitting distance of the Star & Garter, this down-tuned slightly metal hardcore band don’t mess about. A scary shouting shouter with more tattoo than skin pounds his chest in anger at the lyrics he is forced to sing due to the pitiful state of our society.

More local produce in the form of Fatalist who impress with their abrasive double D-beat chugging sound. This sometimes post-hardcore soundtrack to the apocalypse is complimented by rasping gravel chewing vocals, and canvas trainers.

The tractor and trailer outside can only mean Casual Nausea are in town. Hailing from Ipswich, they add a cow-punk-hardcore element to the proceedings and the crowd loved it. Yappy dual vocals from Zoe and Simon keep everyone on their toes as they hit us with their verbal shovels and picks. Great fun.

Promoter Ian Tree Robinson is simply spoiling us. Whetting our already drenched appetites he serves up a dish called Burning Flag. These noise abatement haters from Halifax are on their third LP, ‘Matador’ (review) and are in a bullish mood. From the searing start to the bitter end, Burning Flag seem to always find an extra gear, and this time they ripped the gearbox out and threw it right at us. Holly screamed and spat out every word before a baying crowd.

That was the storm before the hurricane that is Incisions. Renowned for his onstage nonsense, vocalist Jordan adopted a no-nonsense approach tonight and the songbook was literally torn through at neck-breaking speed. This was the repeat prescription everyone inside had hoped for. The band have somewhat matured since their 2016 debut, they’re like grown-up children nowadays who make a bliss filled racket.