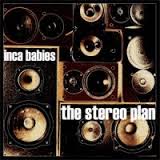 Reformed eighties band the Inca Babies are to releases a new album ‘The Stereo Plan’ on their own Black Lagoon label.

It’s the third album in their ‘Death Blues Trilogy’ of album’s released since they reformed a few years ago.

‘Having plotted the difficult days following original bass player Bill Marten’s death, and then fnding their feet again over the previous LPs, the new album is a riotous splash of rifs and larger-than- life characters.

Explaining The Stereo Plan, which opens this album, Harry says: “It’s a driving, relentless rif, with a lyrical ‘to do list’ of a desperate man living his last days through his scratched vinyl record collection.”