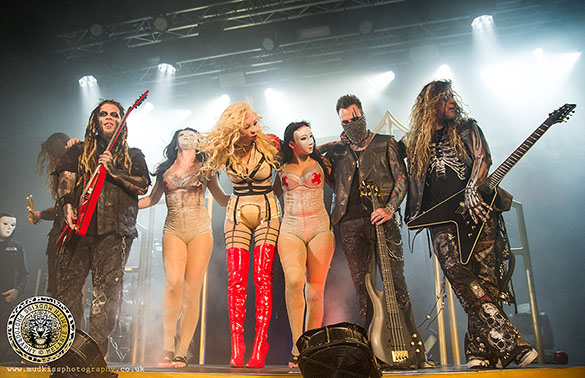 Louder Than War writer Dom Walsh and photographer Melanie Smith went to check out the visually stunning LA metal band In This Moment as they passed through Manchester  on their current tour. Full review below. Oh – and we’re debuting a new photo gallery effect with this review – click on any of the images / thumbnails on this page to check it out!

LA metal band, In This Moment, have risen to prominence in the near decade of their existence. With several albums under their belt, an army of devout followers, and one of the most irresistible front women in metal, the band command attention. A sold out Manchester Academy spoke volumes for the band’s popularity, and the palpable tension as the band’s set neared was certainly rabid amongst the mostly young crowd. 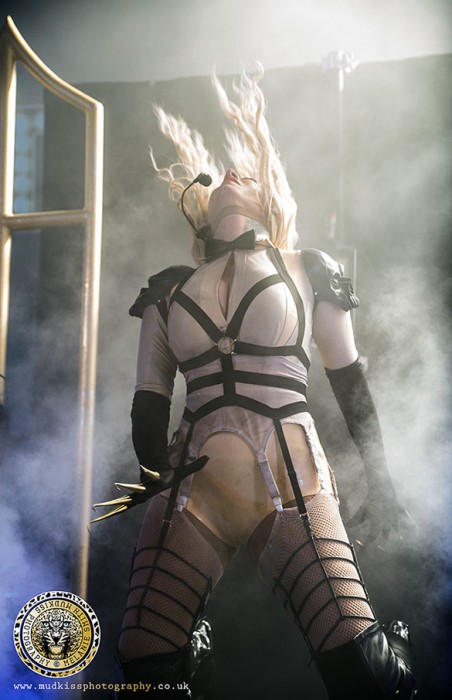 With the electricity in the air feeling like it was at breaking point, In This Moment arrived a few minutes later than scheduled to some grandiose pomp and circumstance and smashed through Sick Like Me. Haunting voice over tapes welcoming the crowd to the Black Widow show immediately had me thinking I was about to embark on a show with Alice Cooper. Whilst there was significantly less blood than an Alice Cooper show, the pageantry was certainly on a par.

The amount of costume changes that singer, Maria Brink, partook in was incredible. After each song there were suitably spooky interludes whilst the two dancers, and Brink, had time to change. The band firmly took a back seat visually, however their delivery of crushing riffs and industrial beats provided a suitable platform for an overtly sexualised show that had everything from giant syringes and nurses outfits, to ‘Sex Metal Barbie’ taking to the pulpit for the dub step infused song of the same name, to Brink being caged in her scantily clad outfit.

When you think of artistes such as Alice Cooper, Rob Zombie and Rammstein and the shows they create, women usually feature as objects of desire or sidekicks; with In This Moment, the women are front, centre, and commanding attention. The whole set was well choreographed in its dance routines and set changes. Whilst comparisons with other metal artistes can be made it may be more appropriate to make comparisons with the slick choreography and imagery of Beyonce or Lady Gaga.

The bands set, comprised by mainly tracks from 2014s Black Widow and 2012s Blood, was a lavish and well produced affair. It’s gothic undertones and industrially driven metal made for a great spectacle. In the surroundings of the Academy, it felt like the band’s show needs a bigger arena to really express their true ambitions for an already ambitious show; hopefully in years to come, this will come to fruition.

In This Moment can be found online here: inthismomentofficial.com. They can also be found on Facebook and they tweet as @officialitm.