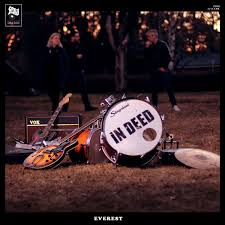 Enhanced reissue of Swedish band In Deed’s second album originally released in 2018….Ian Canty belatedly raises the alarm, alerting us to the chance of some brighter days for loud and catchy Pop Music…….

There is the very real possibility that we could miss out on a new golden age of Pop Music by simply not knowing about it. Radio stations obsessed with clapped out oldies, “talent” show graduates and vacuous boy bands hogging the charts and airplay, plus various other ne’er-do-wells have damaged things to such an extent that over the years bright and brash Pop has been pushed right out to the margins. I speak as someone as “out of the loop” as any, but thankfully there is still time to catch up.

Because the fightback most definitely is on. The Big Stir label is playing its part, with the imaginative Digital Singles Series and a discerning ear for a great pop tune. Now they have reissued now In Deed’s vinyl-only 2018 album Everest as an enhanced CD. Recently the Armoires (reviewed here) easily proved they had what it takes over album length beyond any reasonable doubt and In Deed do likewise here. This is a peach of a LP, full of fresh, punchy and loud Pop tunes the type of which were once were a staple of our lives, but have now been banished from the airwaves. In Deed seem to have a similar kind of euphoric and exciting sonic deluge that the early Orange Juice singles had in 1980, while not actually sounding like them at all.

They have been in operation since emerging from Uppsala prior to dawn of the 21st century (around 1995), but it is high time they were less of a well-kept secret. They currently line up as Linda Karlsberg providing vocals with Richard Öhrn and Johan Helander on guitar duties (Johan also adds keyboards) and a rhythm section of Marcus Segersvärd (drums) and bassist Jens Siilakka.

Their debut LP At 4000 Metre made a decent impact in their home country, but the band faded from sight until Everest was released last year. The LP has a wonderful lightness of touch and it seemed like In Deed had remained in suspended animation, waiting to make their move when the time was right. Which is now, for the charm and sheer Pop gusto contained inside will come as a very welcome tonic as autumn approaches.

On this mostly self-produced album the core trio of Linda, Marcus and Richard are joined by Magnus Lindstrom (bass on three tracks) Niclas Malmberg (lovely Hammond on Flavour Of The Month) and Oscar Simonsson (keyboards on three songs too). But it never sounds less than a group effort and the songs range from humour-laced and wise cynicism (Flavour Of The Month) to sad meditations on emotion strife (What Once Was) and resilient kiss-offs (Don’t Need, Don’t Care). Musically and sound-wise In Deed strike the perfect balance, resulting in neat tunes that will remind even old goats like myself why I loved Pop Music in the first place.

The craft applied and attention to smaller details all add up to make something special – like the sun-kissed harmony backing vocals on Five Times A Day or the elegantly wheezy organ sound on Over And Over. The updated Searchers-style Folk Rock perfection of Don’t Need, Don’t Want is a real gem, making for a natural single. Punky fast chords herald the beginning of Never Really Noticed, before a solid funky rhythm provides the grounding for classy piece of big Pop. Changing pace, Fantastic is an excellent torch ballad with a Folk Rock tinge, which brings home the pure vocal talent of Linda and the strength of the songs.

Of course you could reference bands like the Primitives and Cardigans at certain points on Everest (set opener Another Start is a little like a heavy-duty version of the latter), but In Deed instil enough of their own personality and musical tics to make you always sure you’re not listening to someone else. According To You nails down that 60s Pop sound of just before the onset of Psychedelia, presenting it as magical Beat Pop recast for a new age. They even throw a bit of a Ska guitar into Flavour Of The Month and get away with it. 15 Minor House is a great way to end a record, touching on a kind of downbeat Jazz/Psych Rock sound, like Procul Harm with female vocals and castanets!

Everest has a big heart and is equipped with invention and loads of catchy tunes. All you could want from a great Pop album really, a pleasing, satisfying and compulsive listen. Another great offering from Big Stir and let’s hope In Deed are a lot quicker in following it up as this is stuff is highly addictive. They’ve done their bit, so is there a place in the charts and your heart for them?