Home News Imperial Wax (the last and longest line up of The Fall) announce... 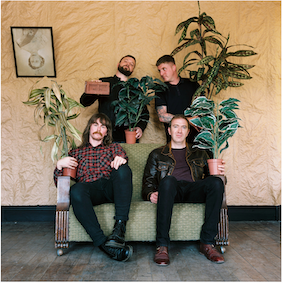 Imperial Wax are the longest serving and last line up of legendary Manchester band The Fall.

The 11 year veterans Keiron Melling, Dave Spurr and Pete Greenway have teamed up with frontman Sam Curran and have already recorded forthcoming album “Gastwerk Saboteurs” scheduled for release in May 2019. The album was produced by Mat Arnold (Noisettes, The Coral, Peter Gabriel, The Fall) ex in-house engineer at Real World Studios.

The band have signed the publishing over to Wipe Out Publishing.

Imperial Wax are are signing their debut album to Saustex Records, the Texas based label recommended by friend of the band Jeff Pinkus (Butthole Surfers, Melvins).

Coventry – The Tin At The Coal Vaults – 2nd March