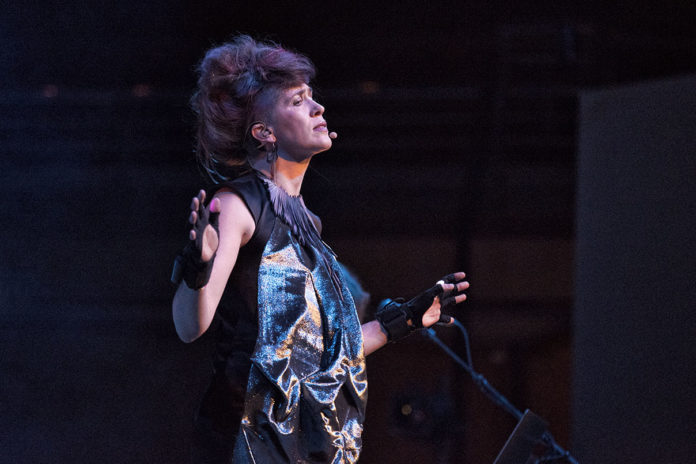 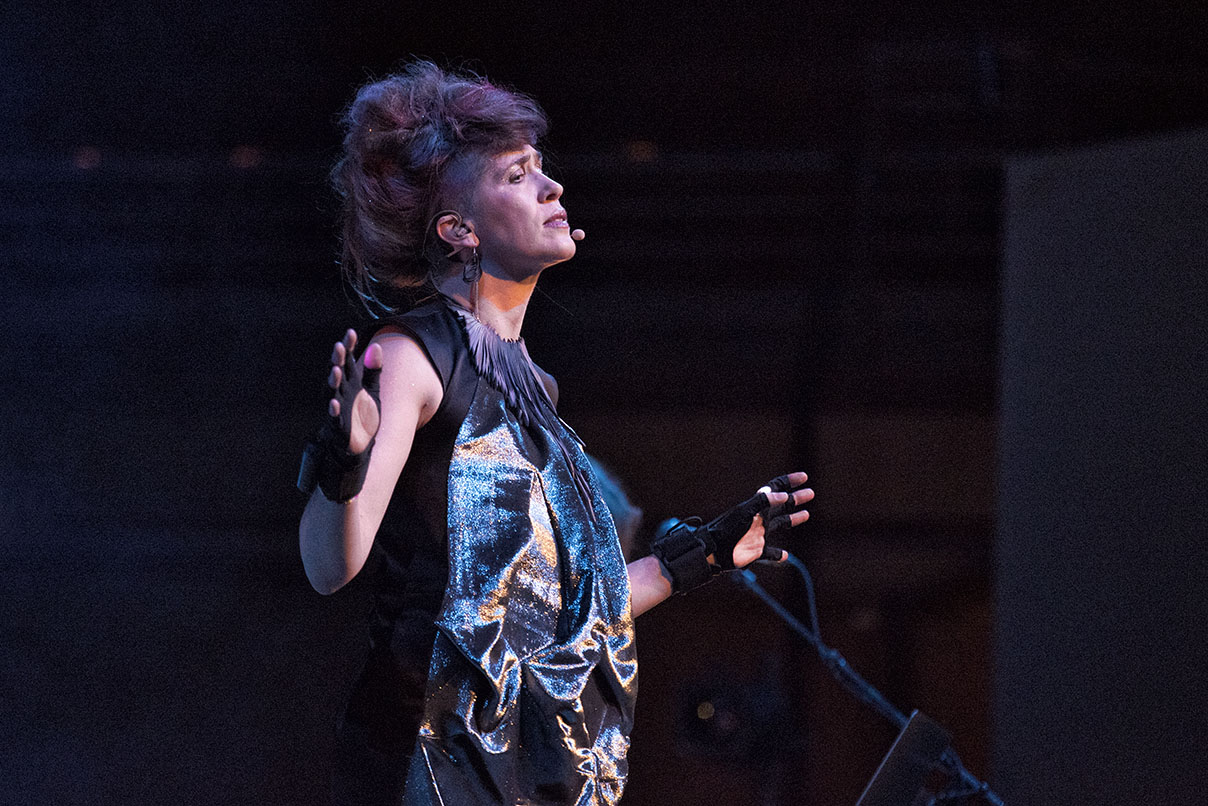 Cazz Blase and Melanie Smith (photos) watch Imogen Heap reunite her synth-pop past with her soundscape-y present using the marvellous acoustics of the Bridgewater Hall.

Clad in a striking gold lamé and black dress, coupled with shocking pink tights, Imogen Heap succeeds in making a low key entrance without fanfare at the start of tonights Bridgewater Hall performance. With a quiet hello to the audience, she takes a seat on the edge of the stage to sing as the band begin to play a new Frou Frou track, ‘Guitar Song’. It’s an uncharacteristically stripped back lament, one which is dominated by folky vocals and a gentle guitar sound, but it’s a good opener for Heap and the band, warming up both band and audience gradually. 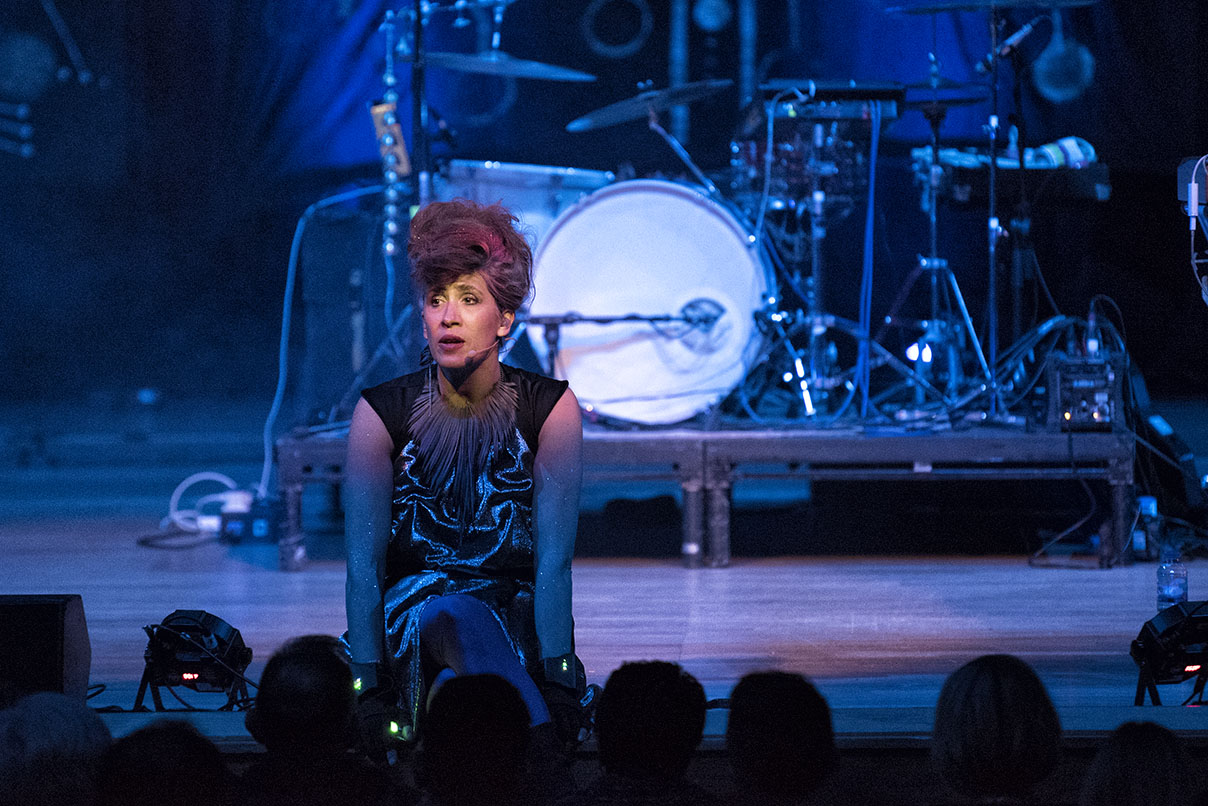 Imogen introduces the band, who include the other half of Frou Frou, Guy Sigsworth, and explains that she feels its best to perform such introductions early on, rather than at the end of the show. It’s a generous gesture that is typical of her, as is the introduction to her mi.mu gloves, the wearable tech that she has been deeply involved with creating, and which have become such a key part of her music. As a performer, she’s clearly very comfortable chatting to the audience, and she comes across as both likeable and funny, with a slight self-deprecating edge.

The show is divided into two halves, split by a twenty-minute interval. The first half is mainly comprised of Frou Frou songs, the second mainly solo Imogen Heap songs. As such, the first half is a blissful melange of intelligent catchy-but-complex synth-pop, during which Imogen weaves her glove movements and instrumentation in with her dancing on crowd favourites such as ‘It’s good to be in love’ and ‘Flicks’.

After the interval, the band return, with Imogen leading the way in an Elizabeth I style ruff made of wires and LED lights. The lights seem to resonate to her voice and to the cheering and clapping from the audience, but it’s unclear as to whether they work on a musical level with her gloves or not. Even so, it’s a visually impressive piece of wearable tech.

Her solo work could be regarded as being more soundscape-y than pop, and it comes as no surprise to discover that she composed the soundtrack to the play Harry Potter and the Cursed Child. This sense of the filmic and the soundtrack-y is also underlined by the inclusion of Frou Frou’s ‘Let Go’ in this half of the set, a slice of 80s esque synthpop that featured on the soundtrack to Zach Braff’s film Garden State. As Heap comments; a lot of bands got breaks from that soundtrack. 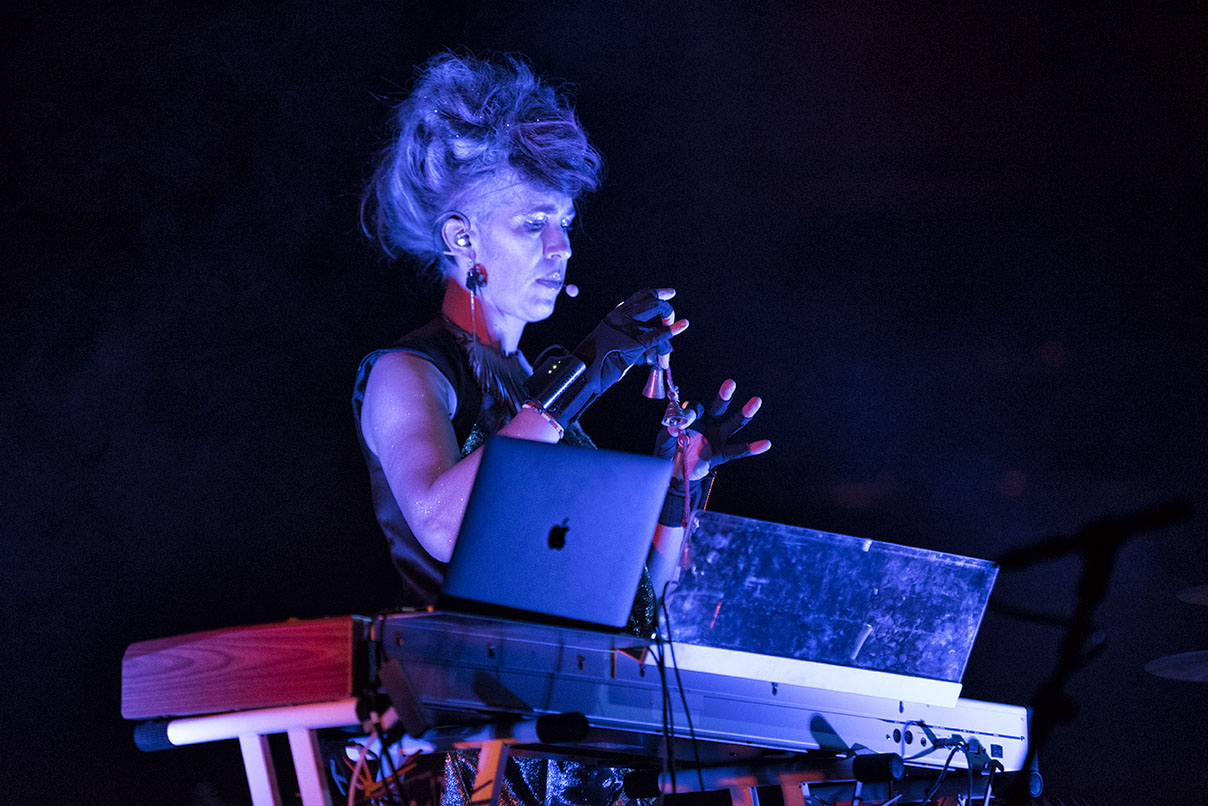 Another song from the past is ‘Speeding Cars’, a breakup song from 2006, and the please-let-me-escape-this-party memoir ‘First train home’ from 2009, both of which make for all absorbing moments in a strong set. ‘Headlock’ and the eerie-but-wonky brooding piano of ‘You know where to find me’ are also highlights.

While all of the songs are sonically complex, a number of them, such as ‘Hide and Seek’, are created by Imogen alone, without the band. In some cases, she uses something that looks like a miniature keyboard that produces a sound similar to a celesta, but often she stands by the microphone, creating soundscapes purely with her voice and the various tools incorporated into her gloves, activated by the movements of her hands and arms.

The set ends with one of these songs, and there follows a fleeting exit from the stage before the band return for encores. They begin with ‘Goodnight and go’, famously covered by Ariana Grande as ‘Goodnight ’n’ go’. They intend tonight’s version to be a mash-up of both versions, and as such are re-titling it ‘Goodnight and’n go’ for the night. The final encore ends where Frou Frou began: With Imogen and Guy, him on keys, her on gloves and vocals. Both encores get standing ovations. 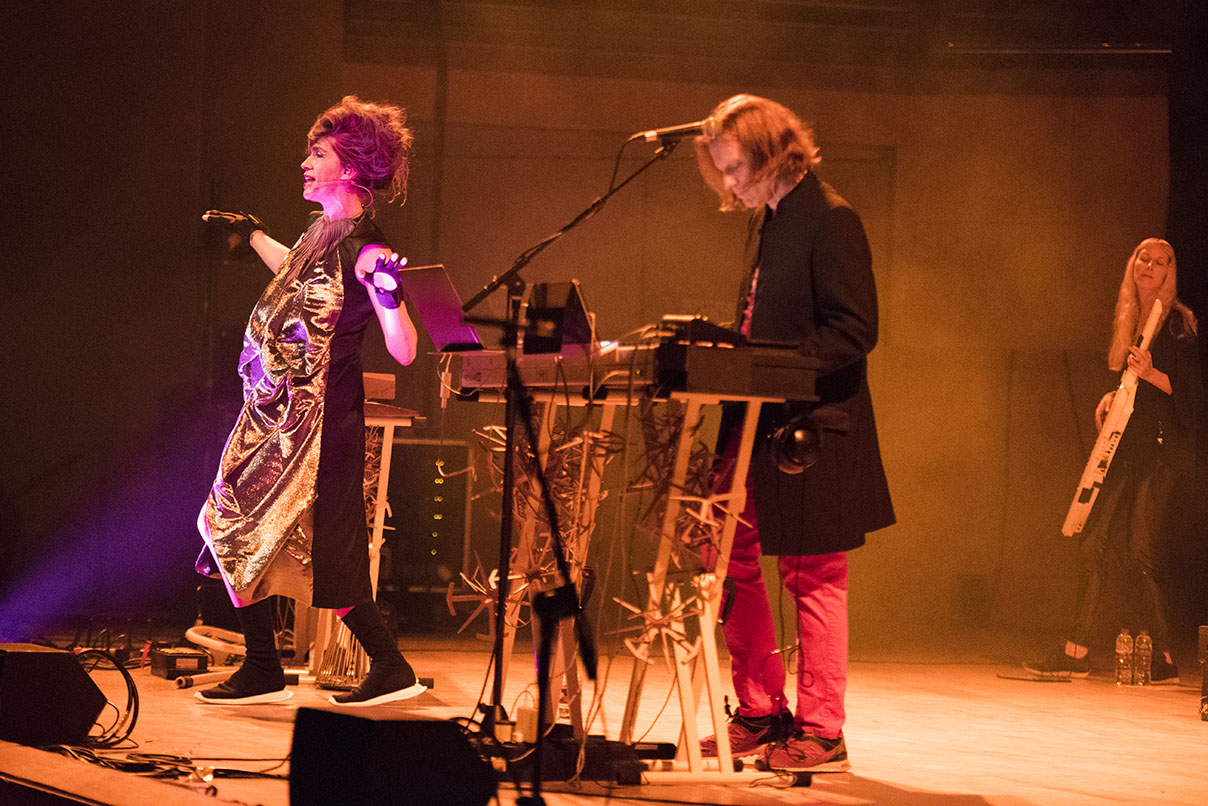