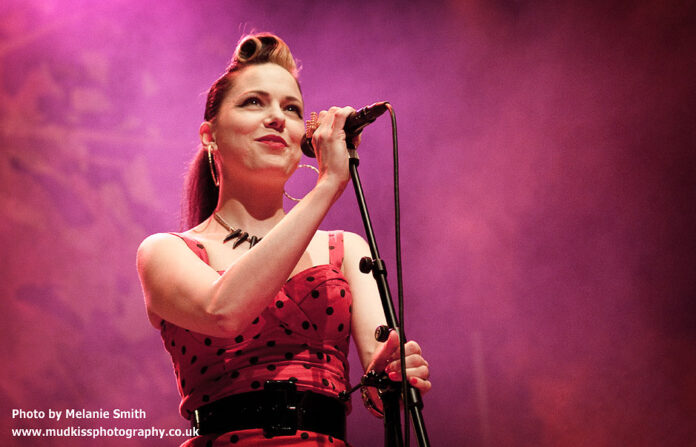 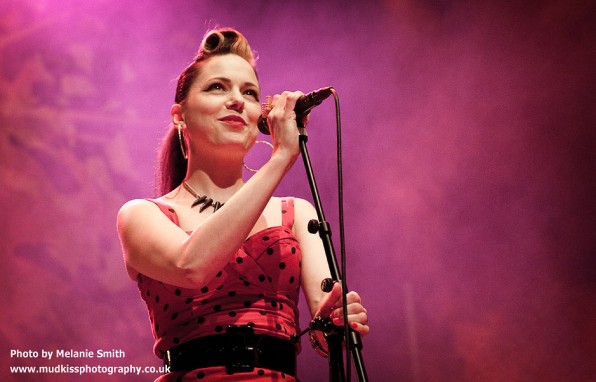 This photo of Imelda May and all others on the page © Melanie Smith.

To the raucous rockin’ crowd, going on Jools Holland can be a bit of a killer. Not so for the irresistible Imelda May.

Playing at Warrington’s Parr Hall on Wednesday night for the first gig of her UK tour, she wowed the varied crowd with a mash up of fan favourites and teasers of tunes from her upcoming album. She arrived on stage, looking like an old school pin-up model in a polka dot wiggle dress, exuding confidence with her trademark hair roll. There was no greeting or introduction to the crowd; instead she let the music do the talking. And my goodness, did it deliver. 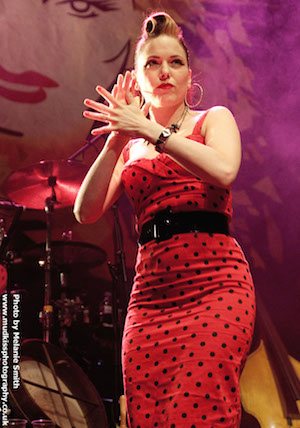 New song ‘Tribal’ received a great reception, instantly hooking the audience with its infectious beat and classic rockabilly riffs. After another new song, ‘Wild Woman,’ carried on the up-beat vibe and had the audience eating out of the palm of her hand. Feeling comfortable now, her Irish charm really came to the forefront. A bit of banter with the crowd about her husband, guitarist Darrel Higham added to the likeability factor and the friendliness of the crowd coloured the auditorium in a rosy hue. Heraldic trumpets spelled out the start of crowd pleasing ‘Big Bad Handsome Man,’ followed closely by well known ‘Love Tattoo.’  By half way through May was really cooking and revellers of all ages shook and shimmied to the classic beat.

Unlike so many acts doing the ‘retro’ thing, Imelda May has the talent to match the style. With a vocal range almost Billie Holiday like in stature, her beautiful rendition of Blondie’s ‘Dreaming’ – which she performed as an encore with bass player Al Gore, will stay with me for a long time. It was stripped out, smooth but hauntingly innocent and pure. Unsurprisingly, her set ended with the anthemic ‘Johnny Got a Boom Boom.’ With lines like “big bass notes” and “deep down sound,” the performance didn’t disappoint. The rawness of May’s voice combined with the unsurpassed musicality of her talented backing band, really impressed. January 2014 will be known as the year that Warrington went rocking.

All words by Haili Hughes, whose Facebook page is here, and all photos by Melanie Smith whose website can be found here. More photos from this gig can be found below.