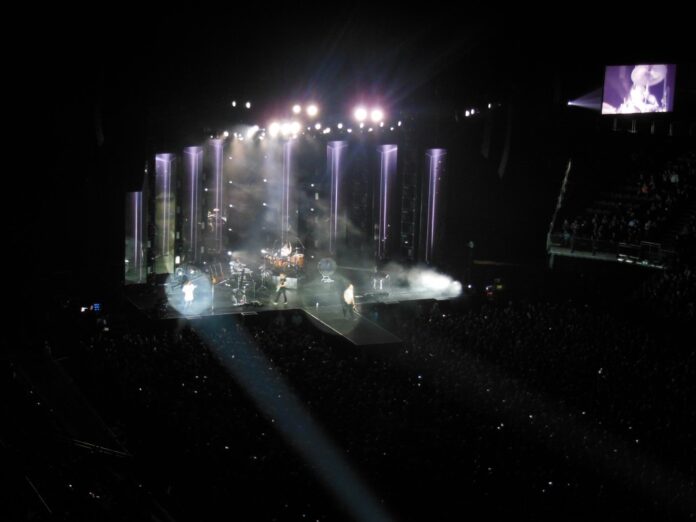 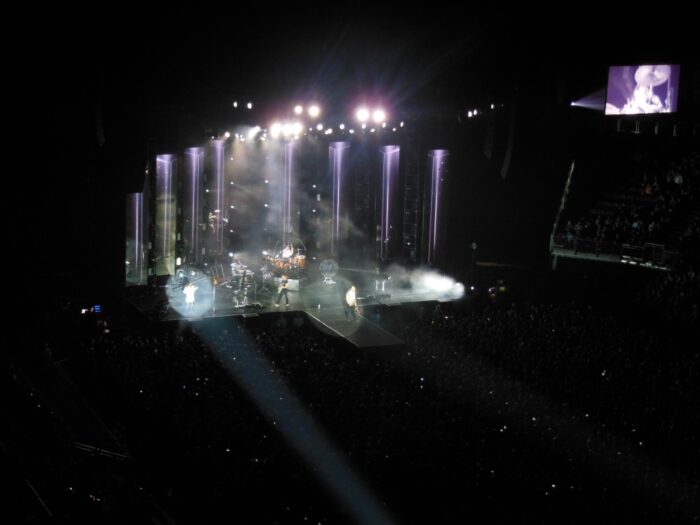 The American rockers play their biggest shows to date. Are they able to pull it off ? Louder Than War’s Craig Chaligne reviews.

More accustomed to seeing bands of grizzled veterans ploughing their trade at The Half Moon in Putney, this was a rare visit for me in one of the UK’s biggest indoor venues, the O2 Arena in Greenwich. A venue that I’ve only visited once since I’ve moved to London (for Monty Python’s “One Down Five To Go” shows). Imagine Dragons’s success in such a short period of time seems quite staggering and only heightens the impact that a several successful worldwide singles can have now have on a bands career. The band was playing Dingwalls in Camden 3 years ago and now they’re doing the O2 for two nights. Capitalizing on the global success of their album “Night Visions”, the band (or their management) were clever enough to keep the momentum going by recording songs for their new album entitled “Smoke + Mirrors” in between the several instalments of the lengthy tour that followed the release of their first album. This strategy enabled them to announce a world tour and the new album while songs like “Radioactive”, “Demons”, “On Top Of The World” and “It’s Time” were still on heavy rotation on the radio. The demand for tickets was so high that that a second date was added before a single note of Smoke and Mirror was ever heard.

The mixed critical and commercial response to the new album didn’t put off the fans and it’s a very enthusiastic audience that greeted the band’s arrival on stage after a nice opening set from “Sunset Sons”. The presentation was fantastic with a good light show and the screens on each side were small enough to force you to concentrate on what was happening on the stage rather than staring at close-ups of the singers face for an hour an half. Were the band able to put on a show that would fill in the arena and draw in the whole audience ? Unfortunately this was where they fell short. As catchy as their singles are, they definitely lacked the charisma required in the arena rock field. Dan Reynolds is no Freddy Mercury and hasn’t got the egomaniac showmanship necessary for pulling off a show in such a big venue. Even a “surprise” disappearance during one of the songs and his subsequent reappearance at the other side of the arena where he hugged and shaked hands with the fans felt a bit contrived. On a more positive front the band’s renditions of their hits was musically great and the songs from Smoke + Mirrors certainly sounded better live than on the record stripped from some of the heavy production featured on the record. Their gratitude to their fans is obvious with Dan thanking them profusely at every occasion.