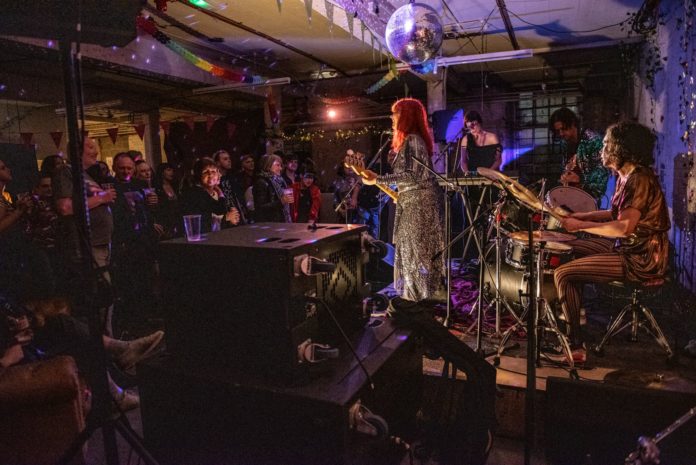 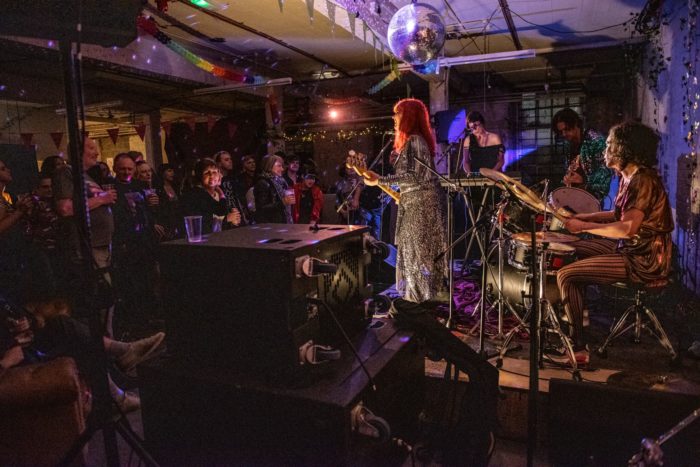 This was a single launch gig with community and creativity at its heart – as three bands: Godspeed You! Peter Andre, Glove and ILL (with their headlining launch of the brilliant ‘Kick Him Out The Disco’) – came to the co-operative venue Partisan Collective in Manchester, a tucked-away haven of talent located just off Cheetham Hill Road. This 12 October Saturday night was finalised with an immersive DJ set courtesy of DJ Mix-Stress.

Partisan Collective celebrates place and people together– so attendees aren’t just coming to a venue, they are part of vibrant community. This was evident in the eclectic line-up. ILL (pictured above), as well as a range of artists came together celebrating self-expression, exploring themes of gender, diversity and difference – and upholding a bloody good time in the process.

It seemed a fitting atmosphere then for ILL’s single launch, especially as it was here that the band were involved in a Partisan opening party two years ago: marking the beginning of the venue. Just like the place itself, the band have also transformed over time – now with Ben Nield on guitar (following on from the impressive artistry of Tamsin Middleton who is currently in LIINES as well as working on her own solo project Vice Vera) and a sound that keeps on evolving; guitar, bass, keys and drums fizzing with electric drive – yet still retaining a playfulness bands so often sacrifice early on.

There certainly was a playful mood in the room too, as the gig unrolled complete with a brilliantly bizarre compere – a full-grown person with the head of pug: The Welsh Rarebit. The disturbingly realistic pug mask twitched and shifted, quickly engaging the room to focus on the stage. Throwing out formalities and embracing the odd is after all what the evening was all about. 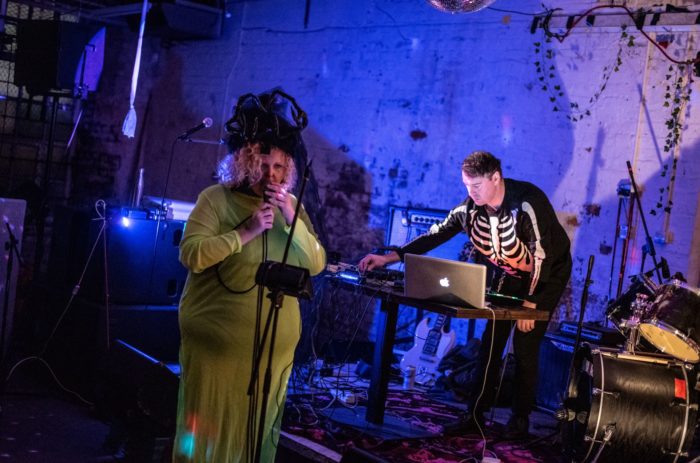 First on the bill was the inventively-named Godspeed You! Peter Andre (pictured above), a duo serving up a haunting wave of distortion-dredged noise music, weighed with witchy vibes, ebbing and flowing in a seething sonic tide. Combined with intense lighting effects and creative costume, GSY!PA Were quick to attract attention, performative punch all wrapped round an expansive, note-opening Gothic core. Loops and layering meant that this was heavy, haunting music… like the sounds churned from some kind of other-world. This disturbing effect was distinct, but evidently quite an intense listen that tests the audience. The creation of Kaskie (Death of Money / SVNTREADER) and Emma Thompson (Water / Fat Out) – who utilised the stage space through movement, to atmospheric effect – GSY!PA’s set was studded with volleying warped vocals, sudden strings of beats and plenty of punch. A duo that definitely make an impression.

The Welsh Rarebit then again took to the stage – for a highly-animated introduction of the next band of the night – all whilst draped in a Welsh flag. Wales is after all the home country of Glove (pictured below): a duo capable of captivating the audience with a stunning stage presence, a real collaborative chemistry. This very much enhances their carefully-crafted music which moves with brilliant bass, volleying vocals and body-shifting beats, turning up a real intensity in the proceedings…. expressing a kind of instinctive, almost tribal sound, satisfying in its deep-striking nature. Glove is the collaborative project of SloSilver and Stephanie Finegan, both brandishing a single dark band of face-makeup round their eyes like a lash of ritual painting, releasing spiralling and soaring vocal energy, combined with perceptive, powerful instrumentation. Glove really is a band that combine a raw-edged release with real technical skill – wild washes of guitar, seriously plucky, pummelling bass and pure drum power underlining a blistering ability and intensity. 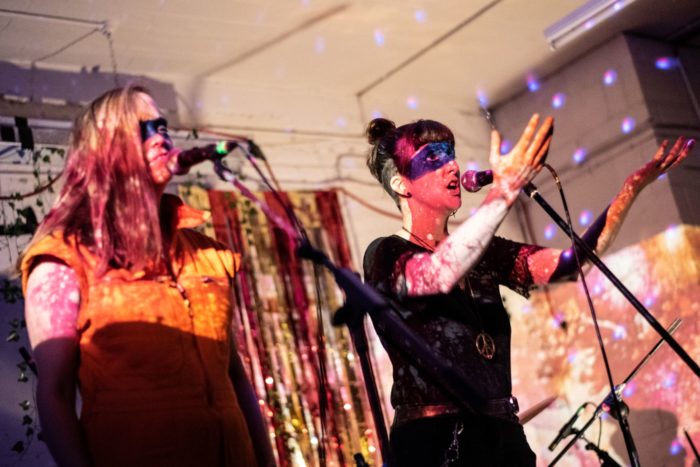 The deep-delving ‘Death is Rebirth’ proved a profound audience favourite, whilst much of the set had the by-now-packed crowd rolling and thrashing. What also impressed me is that the band made the best of what were some evidently challenging technical difficulties whilst on stage (especially a lack of volume in the microphones.. and on the drum) – instead dragging the drum out into the audience, pounding and pummelling, bringing us all together in appreciation of this immersive, explosive artistry. Glove certainly know how to connect with a room: high-energy humour, performances from atop the speakers, even an on-stage instruction to ‘hug yourself’. They also played some exciting new material, a piece powering against prejudice and searing in its sonic take-down of stereotypes, pushing against the description of people as ‘girls’, especially in the creative field. Driving drum and collaborative vocal cries underlined Glove’s deftly defiant, utterly intense exploration of sound… leaving many in anticipation of more to come.

Their set was followed by a final compere appearance, this time complete in wrestling garb – all adding to wacky energy of the night. And then…came the thundering pop-punk, identity-exploring sound savviness of ILL. It is rare for a band to ooze both cohesive chemistry and a kind of melodic chaos together on stage; but ILL certainly manged it – serving up track after shimmering track of exploratory yet well-worked rhythms, rolling and rollicking with kaleidoscopic keys, vocal flair and an evident affection for making music that explores themes that matter. From the opening metallic-edge of the intense ‘I am The Meat’ – again ripping into gender stereotyping – to the dark majesty of ‘Lizards’ and of course the collaborative calling-out of sexism and frenetic soundscape firing up ‘Space Dick’; this was a diverse and energic set. Vocals came together in a wild upsurge, Whitney Bluzma’s impressive range and depth of expression driving tracks such as ‘Hysteria’, whilst Harri Shanahan not only unleashed a delightfully dabbling surge of keys, but catapulted into the audience with the hauntingly animated vocals of ‘Drunk Fight’. Another one of my favourites was the sprawling space-pop-meets-power-punk pummelling through ‘Spider Goat Towers’; a track telling of unnerving scientific ‘progress’ – questioning ethics and the nature of ‘advancement’… Nield notably creating a guitar core with gravitas, a feature standing strong set-long. 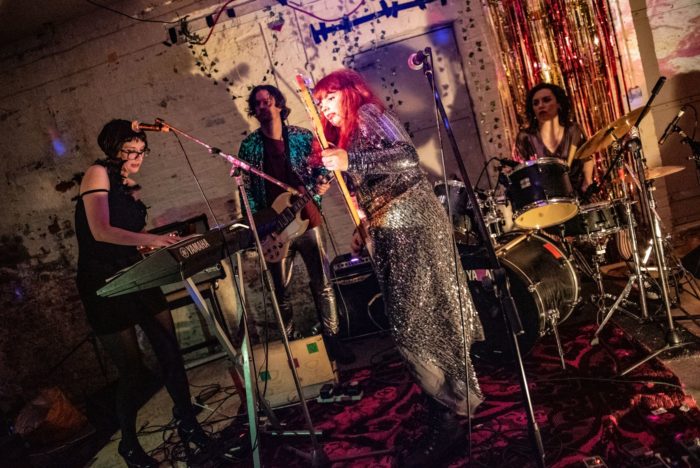 ILL certainly do not shy away from serving up music that considers points of social importance and interest; delivered with an expressive urgency that is never overdone or heavy-handed. Their much-loved ‘ILL Song’ was particularly anthemic, alive with fizzing flourishes of drum and cymbal from Fiona Ledgard, searing bass from Whitney Bluzma and a creative mesh of musicianship that brought the audience to dancing. The percussive flair was particularly notable.

Yet as was similar for the set of Glove, ILL were also faced with challenging technical issues whilst on stage – especially in terms of microphone volume. I really feel for any artist evidently up against equipment problems through no fault of their own… and ILL, to their absolute credit, made the best of the difficulty; bringing humour, hot waves of instrumental artistry and even more expressive force to ensure a single launch that ended the night on high. For the final track, fittingly ‘Kick Him Out The Disco’, they were joined on stage by former ILL member Tamsin Middleton, who added to high-speed blend of hot high-hat-intensity, collaborative cries and wild keys wielding this piece of music like a searing celebration of self-love and personal expression. Also a point of note was the brilliant use of outfits – the band adorned in colours, sequins and sparkle – emphasizing the disco subject of the single, and reminiscent too of their vibrant music video for the track: which was filmed at The Kings Arms in Salford. 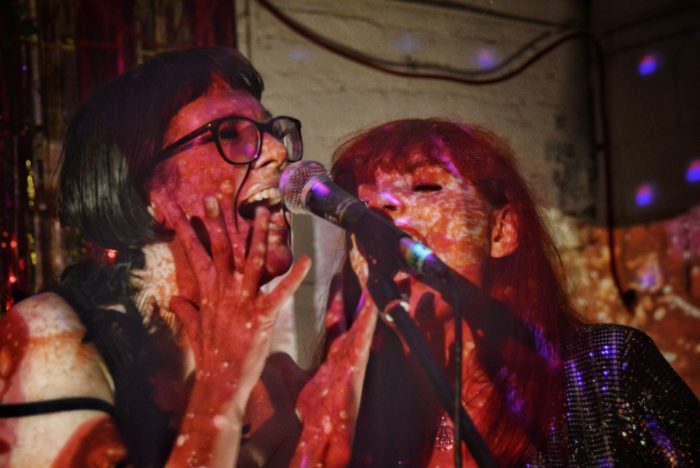 A resonant blend of a socially-considered venue, atmospheric stage make-up and dress, plus a lush extended set from the skilful sonic selector that is DJ Mix-Stress (Rebecca Swarray of Rebecca.Never.Becky) – taking the evening out on a high with a range of funk-pulsing tunes – ensured an ideal combination.

Photography – with thanks to GaryMHough Photography (also on Facebook) for all, except for the final photograph, taken by Mirko Lazzarin of Armadillo Media Productions