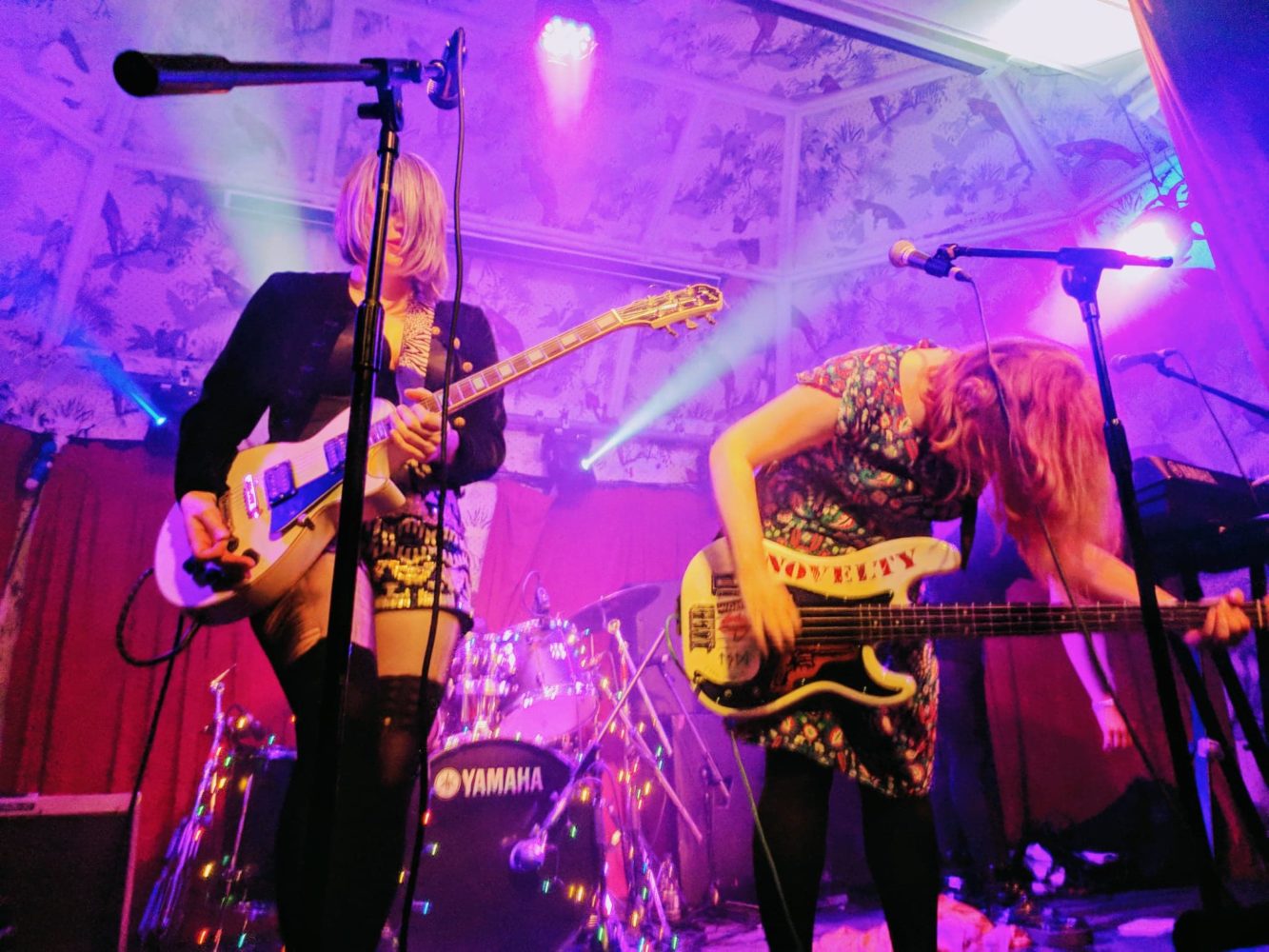 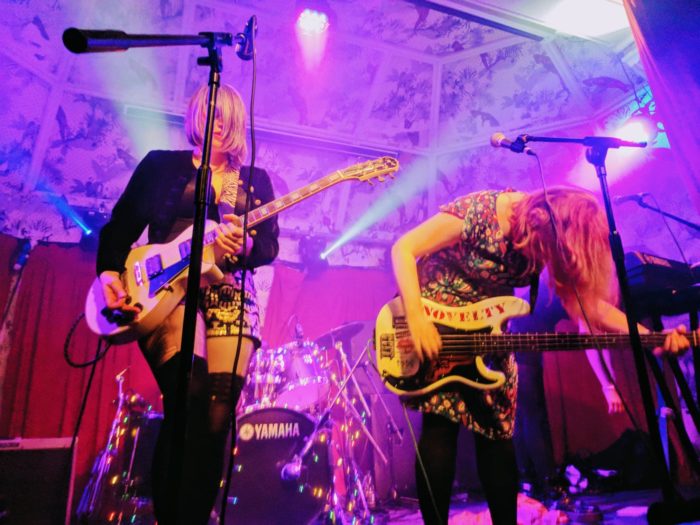 When the crowd are already losing it to the first guest band, you know you are in for a wild night. That was how ILL’s album launch (‘We Are ILL’) at the Deaf Institute began – the Manchester purveyors of warped and wonderful tunes celebrating alongside guest slots for Glove and MOLD. This was an evening which underlined the unforgettable quality of live music – hand-hit and raw beats, bass and grinding guitars which burst through consciousness and catapulted the audience onto another level entirely. We were all incensed, intoxicated, ILL, says Louder Than War’s Emily Oldfield…

The Deaf Institute was a suitably enthralling and almost dream-like setting for the gig to take place, the upstairs music hall with its ornately decorated walls dripping in pink-tinged light as the crowd started to pulse to the first group of the night – Glove. The evening was also punctuated by compere Marilyn Misandry, taking to the stage to deliver pop songs turned on their head and twisted through delicious, dramatic parody dripping with sass; a well-worked warmth and weirdness amidst the installations of illness.

I walked in just as Glove began and was instantly struck by their sound, especially as Glove are just two people: a collaboration between artists SloSilver and Stephanie Finegan. Yet the noise they created seemed to transcend both number and any kind of classification, SloSliver moving around the stage on utterly hypnotic bass whil 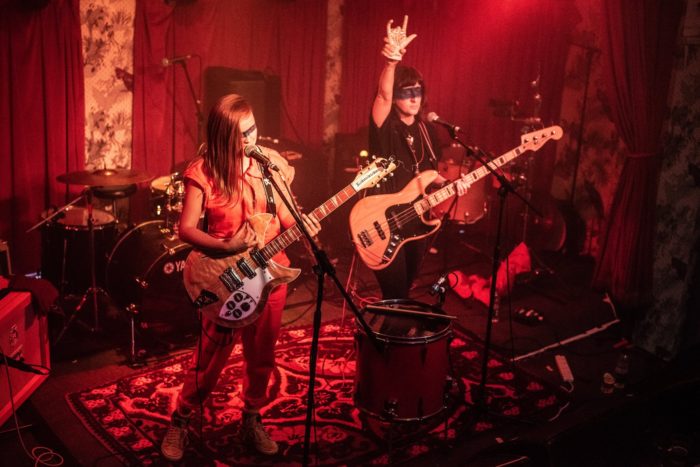 st Finegan unfurled poetry to the crowd which fizzed with the rhythm of its own revelation.

It is no exaggeration to say that I have not seen anything quite like Glove before. There was a bold diversity to the set, the duo often alternating on instruments – drums struck with flailing, desperate motions which drove out noise like protest… pulsing, profound words which wavered into harmonic howls and hushed whispers… spiralling, scratchy guitar which added its own anger. It was as if the crowd was being electrified from the base upwards, tantalizingly tortured by the tribal tunes turning the room into movement, unable to do anything but sway and swerve. These were accounts of livened experience and resonant reflections delivered like medicine… as they say, music is medicine.

First we were given medicine, then given MOLD – a Manchester band with a bristling energy, anarchic antics and art-rock influences accelerated and amplified into chaos. Their new single, The Puppetmaster stands out and their style shifts and seethes as they play a set with all tracks segued into one arresting performance. Their tribal—style makeup looks like they are both burnt by a peculiar force and ripping at the flesh to let out the rawness underneath, with not just one, but two sets of drums providing a relentless rhythm for their musical ritual.

In an era of so many landfill indie groups and over-worked arrangements, MOLD are a much-needed maverick-kind of antidote, with a carnivalesque q 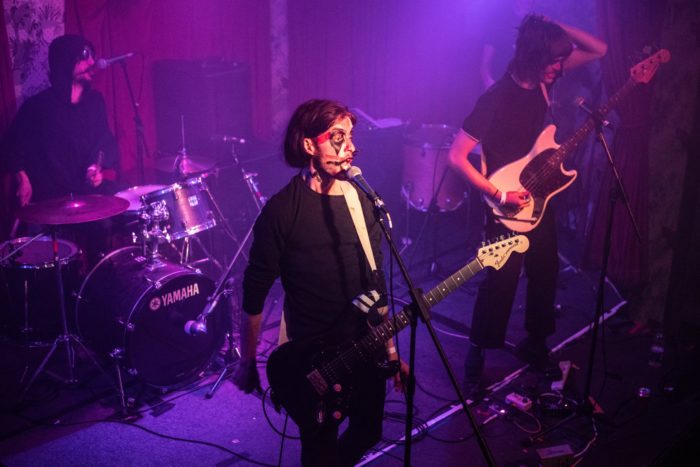 uality coming through their barked and screamed vocals, bulging eyes and billowing guitars as the beats worked the audience up into a frenzy. Was their theatricality justified? Well, there’s no need to justify anything when your music is two-fingers in the face of contemporary convention – rolling and shaking the stage with a kind of wild charge. Singing of society, shame and the state we’re in… but in a way that you are sure to remember.

As I have already implied, there seemed to be a raw, kind of primal power oozing from the tribal elements of the evening: it was as if the room was on fire, the air thickening with some kind of force, an alive, infectious quality. And the main culprits ready to deliver the final, gut-grabbing glut of creative chaos were ILL – warped and wonderful postpunk women with a penchant for stripping down misogyny in society and serving it back up in bristling chunks of sonic rage. I was ready – and already as an obsessive listener of the album ‘We Are ILL’, I had high expectations of its Manchester launch.

I certainly wasn’t disappointed. The band wield a wonderful wired energy on stage which tempts the crowd-ever forward, the mood mincing into the music: one kaleidoscopic crush with showers of upbeat, gusts of glitter and fuzzed unfurling guitar… which is both fun and utterly thought-shifting.

Tracks such as ‘Stuck on a Loop’ (the first song on the album) surged forward with Harri Shanahan’s angry, inventive articulacy and spiralling keys, Fiona Ledgard thundering in with a rhythm on drums which was resonant yet still smashed-up with a sense of rebellion: one of her most sustained and searing performances to date.

ILL served up favourites including the anthemic (in their kind of way) ‘ILL Song’ which incensed with its hotly horror-esque wash of keys and waves of guitar from Tamsin Middleton – the type of glistening guitar mastery that gouges through the ears and accelerates the mind like hot jolt. Even by this point, the audience were a hot mess of hair and pounding feet, frenzied by the point of another much-loved piece of musical artistry ‘Space Dick’. Shouting out against misogyny and ‘mansplaining’ in science fiction, the track was almost melodic in its blend of keys and bass, topped with a back-and -forth volley of vocal exchanges between Harri Shanahan and bassist Whitney Bluzma.

And Bluzma’s vocals are particularly worth talking about, turning her emotive expression into soaring, searing heights, shot through with an almost yodelling quality over her blustering bass. It was a combination of creative force which came into an even more intense light as she spoke to the crowd… “Now for the evil half of the album.” And enchantingly, evocatively evil it was, with tracks like ‘Bears’ gearing up with guitar and rhythmic thunder, rising into harmonies which shrieked and yet synchronised in their surging expression of power.

The band were also joined on stage by long-time collaborator Sadie Noble, who provided additional sonic mavericky with mystical, mumbling vocals which provided an ideal melding force, lending an almost Fall-like quality to the track ‘Bus Shelter’. One of my favourite ILL Tracks, ‘Slithering Lizards’ hit beyond expectations 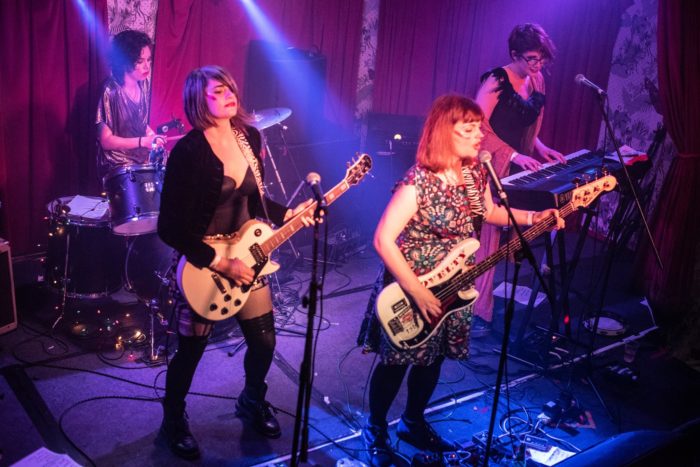 too, bristling and sashaying with swollen menace, the drums digging into my guts. And one track that I was wondering over before the gig – the dark, grinding new album number of ‘I am the Meat’ – was performed with perhaps even more thick, black grip than it does on the album. We were covered in a cloying, compelling fuzz, the band feeding the audience, their eyes upon us, the rapport was extreme.

By the time the encore tracks crashed in, ending with an extended, wiry anger on ‘Drunk Fight’, the room was one pulsing point of ILL. Harri Shanahan screamed of drunken arguments as the band built up music like a wall around her, and Shanahan’s staggering and swearing around the stage, soon became a full-on jump into the crowd. Spiralling, surging instrumentation added to the creative confrontation as she started picking off individual audience members, yelling ‘you’re a liar! You’re a liar!’, finally falling to the floor as the guitars closed in around her.

It was an album launch like no other – spellbinding, with the kind of line-up which is testament to the power of live music today. The type of sound that seethes through your whole system and moulds mood and moment together, smashing skin and bone into sound. In effect, we all became ILL – and it was magical.

Featured image with thanks to Zarina Akhtar. 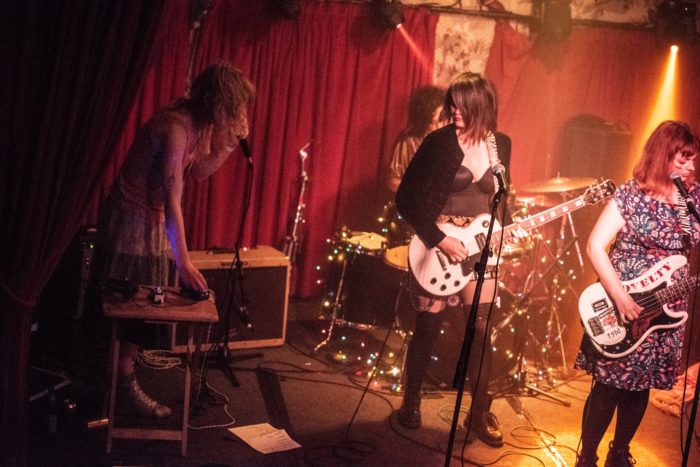 Rest of photography with thanks to Gary M Hough.
Words by Emily Oldfield