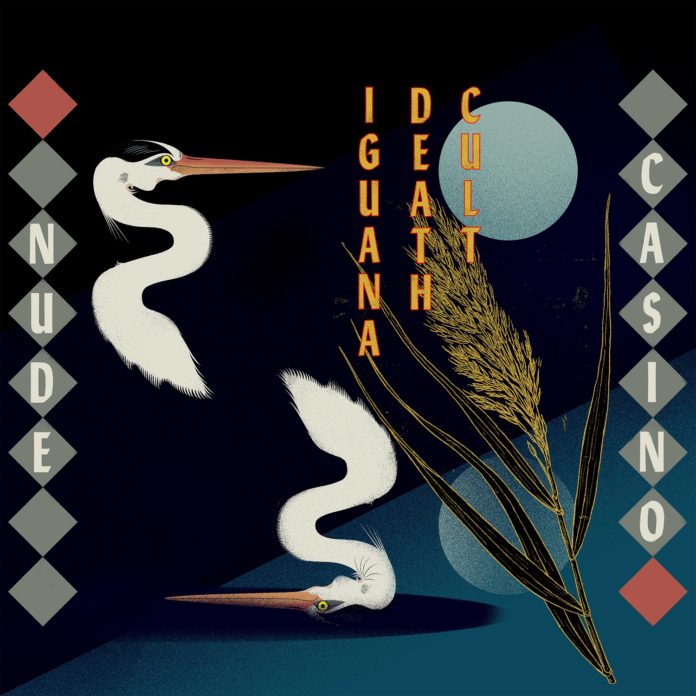 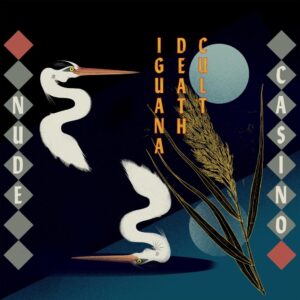 Two years ago, on their debut album, Rotterdam’s Iguana Death Cult raced from the blocks with giddy psychedelic garage rhythms that galloped and spun. On their second album, Nude Casino, they’ve stretched their psychotic psilocybin-laced wings further afield to drop in elements of krautrock and a heavy dose of new wave and post-punk. The result is an album that whips in spiky riffs and jutting rhythms alongside more swirling melodies, altogether producing a great ride through their minds.

They open the album with Prelube, a sweet fifty-second lullaby that leads you gently by the hand before they throw you headlong into the country-rock hoedown of the title track. From there the album starts to really gather pace. Without stopping for breath they’re flying through Bright Lights with its wiry psych riffs and lyrics about escaping the routine in which the once romantic and exciting becomes habitual and boring. Elsewhere, such as on Lorraine and the aptly-titled spasms, the band are on fire with jagged art-rock guitars and pulsating rhythms. They jettison you back to the sound of Scotland in the early 80s, the time when Orange Juice and Fire Engines were taking references from the likes of Subway Sect and moulding the sound that the country would take to their heart right through to groups like Franz Ferdinand and Mother & The Addicts.

When the band step away from this style they are capable of producing something more lush and welcoming. Tuesday’s Lament is the perfect example. The use of acoustic guitars and a more subtle melody works incredibly well set within the other more angular sounds. The vocal inflections call to mind Roxy Music with its semi-tone drops, almost verging on a crooning style. It’s also this song that drives home the lyrical change of direction in the band as they deliver a five verse monologue on mortality and belief, the upbeat rhythm somewhat belying the lyrical content. But it is the lyrical shift running through much of Nude Casino that really marks the difference from their previous work, as they explore the more absurdist in nature, the search for meaning in the meaningless. Liquify, which employs an almost calypso rhythm, flying close to A Certain Ratio territory, deals with the search for transcendence, a change of state, to release oneself from demoralising monotony, a theme that almost dominates the album. In many ways the band are honing in on one of modern society’s most common laments and twisting it through their own kaleidoscopic looking glass. But that’s not to say in any way that the record is a downer. Far from it. When they drop songs such as the Rapture-like disco-infused Carnel Beat Machine it’s impossible not to move.

Nude Casino is a denser and much more rounded record than its predecessor, dealing in more claustrophobic rhythms and themes, but it is still one that oozes with hooks aplenty that propel it along from start to finish. As their first label-released album, it should hopefully send them to new heights from which their dizzyingly hypnotic grooves can fall.

Listen to Bright Lights, Liquify and Tuesday’s Lament below:

August 7, 2020
0
With over 30 albums to his name now, the Berlin-based Sacramento-raised artist is releasing his long-awaited autobiographical double album, which is focused on his hometown.
Read more

THINK PIECE! the art of the musical memoir : by Julianne...